Early last Monday morning Dr. Kent Ashcraft, husband of Tenth District PTSA President-elect Ilene Ashcraft - father to Jessica, Matthew, Andrew, Tiffany, Jonathan and Nathaniel Ashcraft - had an accident while climbing with his son Andrew and two friends on the east ice chute of Thor Peak in the Eastern Sierra. Kent was a well known "peak bagger" - a subset of hiking attuned specifically to reaching high peaks in a day and heading home. He fell from near the top of his climb and broke his neck, by the time help arrived he had passed away.

While this is a great tragedy Ilene reminds us that Kent died doing what he enjoyed most. 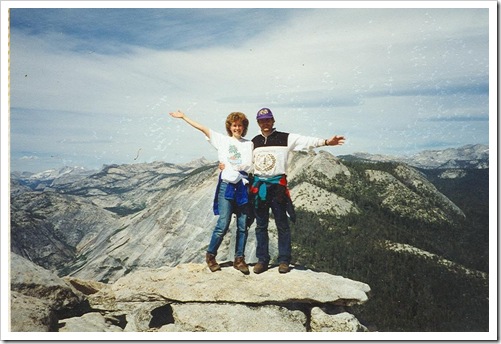 Ilene and Kent AsHcraft at the Diving Board, Half Dome Summit, Yosemite.

Wednesday, 22 April 2009 -- On Monday, April 20, at approximately 8:30 a.m., help was requested for a fall victim in an ice chute off the Mt. Whitney trail above Lone Pine Lake. Kent Ashcraft, 48, from Los Angeles, along with his 18-year-old son Andrew and two friends were climbing an ice chute leading to Thor’s Peak. The group had stopped near the top of the chute to take pictures when the ice Ashcraft was standing on broke loose causing him to fall. Ashcraft struck his head on protruding boulders causing major head injuries and proceeded to slide and tumble an estimated 300 feet down the chute. When Ashcraft’s son and friends reached his location, Ashcraft was not breathing and CPR was initiated.

Rescue personnel from the Lone Pine Fire Department and the U.S. Forest Service 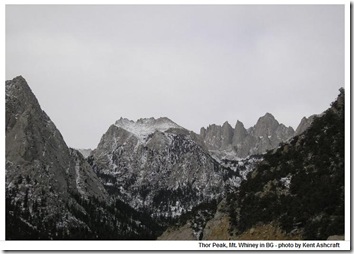 crew from Independence responded as Inyo County Search and Rescue responded from Bishop. When the first rescuers reached Ashcraft’s location, CPR had been discontinued. Ashcraft was deceased.

A CHP helicopter out of Victorville responded. Utilizing a winch, Ashcraft’s body was hoisted up to the helicopter and flown to the Lone Pine Airport.

Although Kent Ashcraft was from out of the area, he often frequented and climbed in the Sierra. He also visited and spoke at the Mormon Church in Lone Pine.

From an internet posting for climbers (Summitpost):

I wanted to pass on the news that Kent Ashcraft, a frequent contributor on both Summitpost and the Whitney Portal Store Message Board, died in fall on Thor Peak near Mt. Whitney on 4/20. Kent was an extremely active peak-bagger, and led his entire family on several occasions. Five years ago he led his entire family, including young children, on a successful climb of the Mountaineer's Route.

Kent climbed all over the east-side. He frequently pioneered new routes. I imagine many of you knew him

My condolences to his friends and family. My thoughts and prayers are with you.

From the Whitney Portal Message Board:

It is with extreme sadness that I pass this news along.

I have just learned that Kent Ashcraft, "Kashcraft" on our board, died on Thor Peak today as the result of a fall.

I remember his informative and always helpful posts on the board, and I most admire his taking his entire family safely to the top of Mt. Whitney via the Mountaineers Route when the youngest were 8 or 9!

I have the deepest sympathy for his family and especially his wife, who supported him in all his hiking adventures.

The only consolation we have is that he died in one of his favorite locations, doing what he loved.

Dr Ashcraft and his brother Harold had Optometry practice on the Westside and I was looking forward to drawing him into the operation of our vision clinks as an advisor.

And all of this reminds us that it our families that bring us together in PTA and the greater school community - and it is they and not budgets and gift-wrap and school politics or testing  or API, AYP or fundraising that are always most important.

The funeral for Dr. Kent D. Ashcraft will be at:

The Church of Jesus Christ of Latter Day Saints

Thank you Kent for being a part of our life.