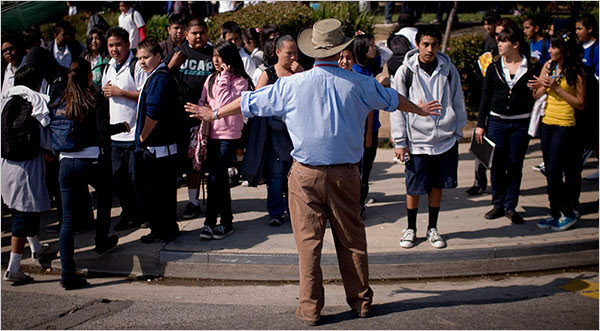 The bell sounds, and children dash to the left and right. Some bounce basketballs as they make their way to waiting cars — some parked illegally — backpacks swing perilously from side to side, and many pile into Metro buses idling two lanes deep. School administrators in bright orange vests move their charges gingerly through a crosswalk as the children try to hurl themselves toward burger joints across the street.

“You guys stink like moldy cheese,” barked Mitchell Summer, the dean of students, as he struggled to move the masses across a busy intersection with a broken traffic signal. “Come on, let’s go, let’s go!” 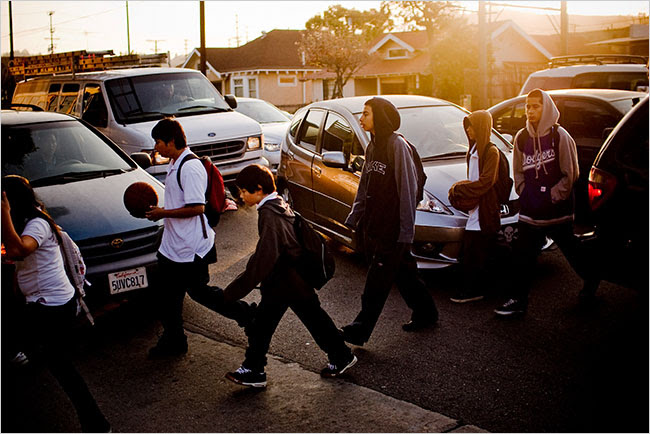 Michal Czerwonka for The New York Times  Officials say narrow sidewalks and many more cars lead to dangers for students, who cross streets in the middle of blocks.

Among the many worries of Los Angeles parents who pack their children off to school each day, traffic dangers have been looming larger in recent years.

The number of serious traffic incidents involving schoolchildren across the 900 Los Angeles public schools has significantly increased, particularly around middle schools, which are not staffed by crossing guards, school administrators and law enforcement officials say. Last year, two eighth-grade girls in Wilmington, near the Port of Los Angeles, were hit by vehicles near school, and one girl was left partly paralyzed.

The traffic dangers have become so widespread that the Los Angeles City Attorney’s Office will soon begin training parents for volunteer traffic control and safety duty.

“The problem is that there are not enough resources,” said Michelle McGinnis, a prosecutor in the office. “And those resources are diminishing.” Financing for crossing guards has decreased steadily over 15 years, and there is a lack of applicants for the jobs, school district officials said.

From January to November 2008, there were 153 traffic-related injuries around schools, which Los Angeles public school officials said was much higher than five years ago, though they could not provide data for prior years.

Increased traffic around schools has vexed other major cities, too. Nationwide, roughly 21 percent of morning traffic is generated by parents driving children to school, said Raquel Rivas, a spokeswoman for Safe Routes to School, a national organization formed to encourage walking and bicycling to school.

Traffic patterns around schools in Los Angeles have become clogged and often dangerous because of a large growth in student enrollment and an increase in the number of parents who ferry their children to and from school out of fear for their safety, Mr. Hopwood said. Especially in high-crime areas, parents are reluctant to let their children walk.

“It’s getting worse and worse each year,” said Brad Smith, an environmental health and safety officer at the school district, “because so many parents feel that they need to drop their kids at the front entrance of the school because they are concerned about harm.”

A school bus driver, Michelle Coleman, says middle schools are her biggest nightmare. “The parents park right here where the buses need to be,” Ms. Coleman said the other day outside Florence Nightingale, northeast of downtown Los Angeles.

Luz Bunacaba conceded that she was part of the problem. But with bus fare of $5 a day and the distance too far for her 15-year-old son to walk, Ms. Bunacaba parks in the bus lane. “I have to,” she said, “it’s the only way.”

Part of the problem is that schools lack enough crosswalks, so students cross in the middle of the block, Mr. Hopwood said.

“We have sidewalks that are too thin,” he said. “At one high school, there are over 5,000 students on the sidewalks, and they get impatient with one another. We have lots of parents double parking. There is just not enough room, and there have been lots of incidents of students getting hit.”

Some parents try to intervene, sometimes though a school district program that trains them how to manage car-pool lanes during drop off. But unless parents are trained, that can lead to problems, Ms. McGinnis said.

At one middle school downtown, she said, parents stood on a corner for hours, studying officers for tips on directing traffic, and then tried to emulate them. But they did not have proper training or equipment, and ended up drawing the unhappy attention of the police themselves.

In studying the safety problems at the middle schools, the Los Angeles city attorney’s school safety prosecutors were surprised to see that traffic was a pressing problem at nearly all of the nine most troubled schools.

So the office, using Los Angeles Police Department officers, came up with a training program and bought traffic safety equipment — bright vests, traffic cones — to try to “professionalize” parents and other volunteers.

The city attorney, Rocky Delgadillo, is also pressing the Police Department to enhance enforcement of traffic laws around schools. “It’s a small investment with a big return,” said Mr. Delgadillo’s spokesman, Nick Velasquez. “Making do with less in tough times.”