The news that didn't fit from August 31st

▼ SCROLL DOWN FOR BUDGET NEWS ▼

August 30, 2008 - Even while grappling with funding shortfalls, the Los Angeles Unified School District is employing more than 800 consultants - paid, on average, more than twice as much as regular employees - to oversee school construction.

by A.J. Duffy from United Teacher

Aug 15 -- If you’ve been to the Beaudry building lately, you may have noticed that LAUSD has installed a pricey, state-of-the-art security system for headquarters—a building that I don’t need to remind you houses people who work far away from students.

IN THE NEWS: Quick reads on issues teachers care about.

A message from 4LAKids the California State PTA  and The Education Coalition.

LAUSD SAT SCORES GO DOWN IN MATH AND WRITING

E-TEXTBOOKS MAY NOT BE CHEAPER THAN PRINTED ONES, REPORT SAYS

A sharply critical report released Monday asserts that commercial publishers are going about the digital textbook revolution the wrong way. Researchers find that since students can re-sell printed books, the price is roughly the same, and that expiration dates on e-texts make them a less viable alternative for some students.

August 26, 2008  -- With classes in Mandarin, overseas trips to China and France, bus transportation for commuters and individualized fitness instruction that includes salsa and tai chi, new students at St. Genevieve High School quickly come to realize that things are a bit different at this Panorama City campus.

Posted on Fri, Aug. 22, 2008 -- Building small high schools was a costly exercise in inequality. Teacher pay should be revamped, with financial rewards for special skills, not just longevity.

Democrats are almost certain to leave their convention in Denver united behind Sen. Barack Obama of Illinois as their nominee for president.

But it less likely that they’ll settle an intraparty disagreement over the most pressing question in K-12 education policy: How much can the public expect of schools?

· One argued that policymakers need to invest in health care and other social programs before schools can deliver large increases in student achievement,

while the other said that increased accountability, the expansion of charter schools, and other education policies would result in better student outcomes.

August 25 -- Children across the country will return to school this year to face a money-hungry bully: the unstable economy.

Soaring food prices will extract more lunch money from students, while higher pump prices mean children will either pay more to ride a gas-guzzling bus or won't get a seat at all. Field trips are being reduced or scrapped altogether to save fuel.

It doesn't stop there.

California budget cuts mean students will compete for the attention of fewer teachers. Some electives will be nixed, and booster clubs and education foundations, which raise money for such things as classroom projects, are collecting less as businesses cut back and parents fret over job security.

A STATE WITHOUT A BUDGET

A State Without a Budget: Day 61 - TWO FROM THE SAC BEE — It may all come down to a whole lot of borrowing – again + Democrats' shift could crack budget impasse

Secretary of State Debra Bowen declared Friday that it is now too late to add any more measures to the November ballot, saying "any more changes would seriously jeopardize the integrity of the election." ... (more)

Though the tally isn't final yet, the state Senate budget vote failed along party lines, with 24 votes in favor and 15 against.
The lone abstention was moderate Democratic Sen. Lou Correa of Orange County.
See sacbee.com for more. ... (more)

Here's what Senate President Pro Tem Don Perata had to say about the budget he put up on the Senate floor this morning. ... (more)

A State without a Budget: Day 60@11:49AM - GOVERNOR PRAISES NEW DEMOCRATIC BUDGET

August 29, 2008 - Gov. Arnold Schwarzenegger today praised a new Democratic version of the state budget as "very courageous" and urged Republican senators to vote for it.

A message from 4LAKids the California State PTA  and The Education Coalition.

The Senate has announced a budget vote for 10 am Friday -- at stake are deep cuts to vital services for all Californians, both now and into the future.

The Assembly may vote shortly thereafter.

It is unclear whether the proposal has the support of any Republicans.

August 29, 2008 -- SACRAMENTO -- -- Democrats in the state Senate said they would attempt to break the budget impasse today by offering their own spending plan for a vote.
It would be the first floor vote on the budget in that house since the fiscal year began 60 days ago.

Thursday Aug 28 7PM - Word has just been received that Democratic President pro Tem Don Perata has scheduled a vote on a compromise proposal to end the budget stalemate that has California on the verge of setting a record for the longest delay beyond the fiscal year for passing a budget. The vote is scheduled to take place tomorrow morning, August 29, at 10 a.m.

Everything - or more than- you ever wanted to know about the budget impasse: ON THE ROCKY ROAD TO THE 2008-09 BUDGET

Dan Walters walks us through some key mileposts on the road to this year's state budget stalemate, and offers some key statistics to help you get to the bottom of the debate.

FROM THE CALIFORNIA progress report

August 28 - So where is the state of California's struggle with a long-overdue, deficit-ridden state budget headed?  Nowhere fast.

A State Without a Budget: Day 58 - SCHWARZENEGGER COULD BE NO SHOW AT GOP CONVENTION

August 27 - SACRAMENTO, Calif. (AP) — When the Republican convention opens Monday night, its prime-time lineup could be missing one of its biggest draws: California Gov. Arnold Schwarzenegger.

A State Without a Budget: Day 56 ...and counting - Federal Judge Orders State to Explain Delay in Implementing Order to Restore Medi-Cal Rates

08/25/2008 12:15:42 PM PDT -- SACRAMENTO—Assembly Speaker Karen Bass has abandoned her plan not to hold sessions on Tuesday, Wednesday and Thursday, a move that would have freed fellow Democrats to attend the party's national convention in Denver.

A State Without a Budget: Day 56 - WHY ARNOLD 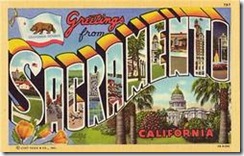 10:55 AM, August 25, 2008 -- Tick-tock, tick-tock -- 56 days and counting without a state budget. Our own George Skelton sits down with California's governor to talk money, politics and (in the nicest way) says "I told you so" about raising taxes.

Confronted by realities, Schwarzenegger turns to tax hike: With the state budget 56 days overdue, the governor explains his shift on taxes.

August 25, 2008 -- SACRAMENTO -- It can't be done, Gov. Arnold Schwarzenegger was insisting, staring at me over a table in his office. You can't have a responsible, honest state budget without a tax increase.
Not this year.