August 14, 2008  - An "historic resources inventory" is being compiled for the city's Community Redevelopment Agency, which is overseeing construction of housing and commercial buildings in neighborhoods it considers blighted....Its $110,000 survey is being conducted in Hollywood in coordination with the city's Office of Historic Resources.

Jim Brownfield, a 1947 graduate of Hollywood High School and former president of its alumni association, expressed alarm that the 105-year-old school may be a redevelopment target. 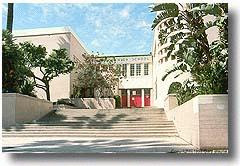 Occupying a full city block a few steps from Hollywood's busiest corner, Hollywood Boulevard and Highland Avenue, the campus is billed "the world's most famous high school" and features a museum display on 700 celebrity alumni in its original 1910 library building, Brownfield said.

School district spokeswoman Shannon Haber said Wednesday that there were no plans to close Hollywood High. "That's just a rumor," she said.

●● Shannon's boss, Guy Mehula, head of the LAUSD Facilities Division confirmed that there was no such interest, intent or plan ...as did city council staff and City Council President Garcetti himself.   —smf, HHS '66   Go Sheiks!