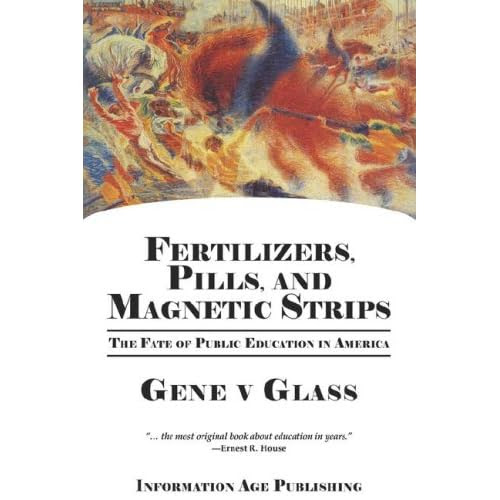 July 28, 2008 - Gene Glass’s thoughtful and provocative book launches angry thunderbolts from the Olympus of educational research. His main targets are a gaggle of would-be reformers of our schools who do their murky deeds under the guise of rescuing us from educational crisis.

Glass is a distinguished pioneer in the statistical analysis of educational data. The major thesis of his somewhat puckishly-named book is that the specter of educational crisis has been evoked to justify a variety of ill-conceived educational adventures, including vouchers, charter schools, high-stakes testing, open enrollment, and many more.

●●smf 's 2¢; The title of the book is of course a tribute to - and and a jibe at - Jared Diamond's watershed GUNS GERMS,AND STEEL - where Diamond reappraised human history and society through the lens of anthropology, biology and technology - scientifically rather than historically. Glass is a statistician; statistics (masquerading as data) have been used by educational theorists (and their wannabe's) of late to beat up education. Turn about being fair play, Glass proceeds to return the favor to the educational reform flavor-of-the-month-club crowd.

These policies, he says, claim to seek greater educational achievements but, in fact, aim to reduce public spending on schooling, and in particular, to reduce the costs of educating black, Hispanic, and poor students. They also tend to promote and subsidize insulated schooling for more affluent whites. He holds that these results are not only the observed consequences of such reform proposals, but they are also their hidden intent.

The book proposes that these mean-spirited educational policies have been fostered by important changes in American society that were brought about by urbanization (fertilizer), decreases in birth rate and increases in life span (pills), and the availability of easy credit and the consequent mounting debt (magnetic strips).

The availability of cheap fertilizer brought about more efficient agricultural practices which led to reductions in family size and to urbanization. Advances in medicine reduced the birth rate and prolonged life and thus diminished the proportion of productive individuals in the population. Glass argues that the rising proportion of the elderly, as well as national attitudes towards money and the increase in personal debt, have soured attitudes towards public expenditures such as schooling. He proposes that much of the concern about reforming public education is not about better schools but about lower taxes and private privileges, all consequences of changes in the composition of the population.

The book offers brief and highly critical analyses of various reformist enterprises: vouchers, charter schools, tuition tax credits, home schooling, distance education, open enrollment, advanced placement, bilingual education, alternative teacher education, and high-stakes testing. Glass has nothing good to say about any of these. He cites data that cast doubt about the effectiveness of these maneuvers, as well as evidence of ineptitude, cupidity, greed in execution, and even criminality, in the case of charter schools. Glass speaks with the sober voice of the consummate empiricist who is also a social critic. His rejection of the crisis criers and his sharp analysis of various putative reform efforts are amply supported by data. Many clearly designed graphics and tabular exhibits are helpfully provided. Much of his criticism is tightly argued, although in his zeal to persuade, he does not forego a few anecdotes, illustrating malfeasance or cupidity. In his single-minded efforts to expose the intellectual bankruptcy and hidden agendas of these would-be reforms, positive aspects are sometimes ignored. Thus, advanced placement is characterized as a way for middle-class parents to save on college tuition and as a segregation mechanism. The creation of additional educational opportunities for gifted students is overlooked.

The major conceptual issue posed by the book is the origin of what is seen as the declining support of public education. Glass’s explanation is essentially psychological and adduced from demography. The dominant white population has fewer children and fewer productive workers. They want to spend less of their money for taxes. Glass points out that in our democracy, school support strongly reflects the interest of the majority. The current reform advocacies reflect these interests since they are held to be disguised efforts to spend less money on schooling. Glass implies that these interests do not simply act diffusely but have precipitated a political ideology that influences the acts of elected officials. This political ideology, invigorated by sharpened income disparities, is averse to public expenditures, favors privatization, and engenders hostility toward educators as public employees. Glass points out that these beliefs are reflected in such matters as a disquietingly large influence of the business community on the governing boards of various educational reform activities and in the administration and interpretation of the National Tests of Educational Progress. One of the more disturbing entries in the book is the speculation that a scientific report that questioned the validity of alarms about America’s educational crisis was suppressed by the George H.W. Bush administration.

Glass also suggests that another aim of many reform activists is the separation of affluent white students from the remainder of the student population. This is a reaction to the threats of what he calls the browning of the classroom. The origin of this motive is not discussed in detail but is consistent with the middle-class voting majority’s pursuit of their own narrow interests. He argues that the attitude of individual states towards accountability and high-stakes testing is linked to an important degree to demographics, and he provides striking illustrations from the history of high stakes testing in Maine and in Texas. He notes the implication for schooling of the remarkable growth of Hispanics in our school populations.

Glass relies heavily on the demographics of self-interest to account for the weakening support for educational spending. This intuitively appealing, demographic explanation could profit from further documentation, perhaps by inter community or international comparisons. It leads Glass to predict increased throttling of future school budgets by increasing numbers of miserly elders and of small families who crave insulated education for their 1.88 children. His sober view that current population trends inevitably entail more educational miserliness skirts the critical fact that educational budgets are sensitive to demographic trends because schools rely most on local taxes for their support. Financing schools through federal taxes would tend to shelter schools from narrow personal interests and the composition of the community. This may not be politically feasible at this time but is not beyond aspiration. After all, federal taxes support defense spending, which is actually somewhat higher than national educational costs, even though the links of defense spending to personal interests are rather slender.

Glass’s insightful discussion of school accountability points to the superficial treatment that educational goals receive in the press and in public discussion. The utterances of business leaders and cultural heroes such as Microsoft’s Bill Gates are treated as received wisdom. The validity of assertions such as that work in a technological society requires more science and mathematics instruction is rarely questioned, even though there are indications that there is more thunder than lightning in these vatic pronouncements.

The text could have benefited from somewhat closer editorial attention to strip out a few repetitions and run-away sentences. But this is a minor fault. Glass has given us an interesting and thought-provoking book that provides worthwhile reading for anyone concerned with public school instruction. Its language is electrified by strong currents of disappointment and anger: Anger about failed expectations, anger about incompetence and greed, anger about the perversion of serious concerns and serious efforts by ideological screeds. Glass resents and decries that the tiller of educational reform is in the hands of corporate leaders and politicians rather than educators. I personally rather like his righteous anger. It is all too rare in the educational research literature. We suppress outrage even when it is provoked by injustice, incompetence, or trying inaction and carefully leach our technical prose of blunt criticism and vigorous advocacy. That may be the reason why the tiller has slipped out of our hands.