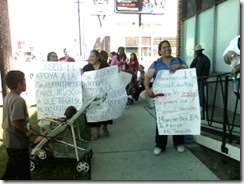 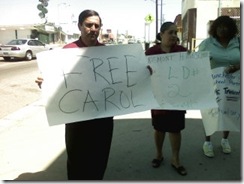 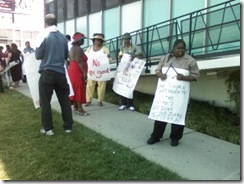 On Friday morning May 16 at 10AM a small dedicated group of parents gathered at the Local District Seven offices in South Los Angeles to protest the administrative action taken by LAUSD Beaudry against Local District Superintendent Carol Truscott and Director Scott Braxton in the Steven Rooney affair. Rooney is the Assistant Principal at Markham Middle School accused of having sexual relations with students at Markham and at an earlier assignment at Foshay Learning Center,

Parent Kelly Bedford, organizer of the event reports that the protest was orderly, with demonstrators representing Latino and African American parents agreed that Ms. Truscott and Mr. Braxton are scapegoats and victims of a cover-up and overall lack-of-accountability by LAUSD, law enforcement and prosecutors in failing to properly act on the first round of accusations against Rooney - before he was reassigned to Markham and continued his alleged victimization of students.

Despite the fact that invitations were extended to news outlets only one local paper showed up to cover the demonstration - one that has produced national news coverage.

The parents have also not received response from earlier requests for information and engagement made to Superintendent Brewer, Senior Assistant Superintendent Cortines and members of the Board of Education. - smf

Following is a copy of the press release and some earlier correspondence.

Thank you Mr. Folsom for bringing this story of support for Carol Truscott and Scott Braxton to the community. I'm surprised that it appears that no organization has publicly expressed confidence and support for 2 dedicated and committed professionals. I understand that District employees may have some fear of speaking out. But, that's why we have professional organizations to represent our interests. I challenge all professional organizations to stand up and be counted as opposed to this attack on the dignity of these educational leaders.