"Flunk the Budget Friday": PARENTS MARCH ON THE GOVERNORS OFFICE

Assembled from dispatches from the front, mostly from Rochelle Lewis Fanali, from Santa Monica Malibu PTA and the California State PTA Legislative Committee

Friday, May 16, 2008 — We had about 110 wonderful enthusiastic parents in  downtown LA today from throughout Southern California; marching four blocks from Pershing Square to the governor's office chanting "Save our Schools" and "Flunk the Budget" with a very warm reception (and a lot of honking) 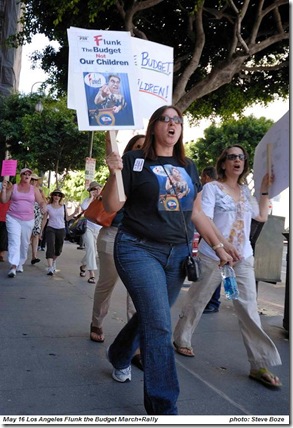 from downtown commuters along the way to cheer us on.

When we arrived, we heard passionate speeches from Scott Folsom who MC'd our event and Assemblywoman Julia Brownley, chair of the Assembly Education Budget Subcommittee (and former Santa Monica/Malibu school board president), who did a great job explaining why this budget flunks the test and is risky business. She urged us to continue to raise our voices for kids through the summer.

Next to speak were Penny Solomon and Ziona  Friedlander, co-founders of Califor

nians Organized to Rescue Education (CORE) a grass roots parent advocacy group from the Las Virgenes School District; Ziona presenting her version of a dialog with the governor …had he been there.

We heard from LAUSD District English Language Council leader Maria Lopez who graciously agreed at the last moment to deliver some comments in Spanish. 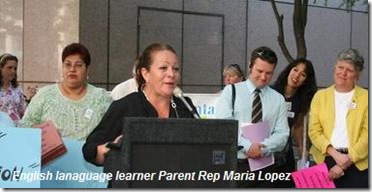 Finally we heard from radio personality and PTA mom Sandra Tsing Loh who was passionate, hilarious and hopeful in calling for a new revolution to rival Howard Jarvis' taxpayer revolution — a revolution of parents in suppo 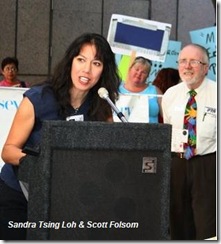 rt of our kids' future.

At the conclusion Donald Zimming, the superintendent of Las Virgenes USD cheered us on, it is up to parents, he said, to lead this crusade. 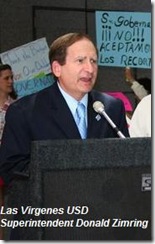 THEN (yes, there's more!) a 500-foot-long red banner -- courtesy of our friends at CORE -- with letters to the Governor from hundreds of children and parents was unfurled on the Spring Street sidewalk where FOX TV news' helicopter captured an aerial shot (which we understand was broadcast throughout Friday to their cable news affiliates worldwide). Pretty cool.

A delegation from the demonstration met with the governor's staff for a frank and fair exchange of ideas and a promise of further dialog. The governor's staff was presented with the "big, big banner" from CORE, ., plus reams of correspondence and petitions from other school district parent groups, including Paramount,

Santa Monica/Malibu and LAUSD groups …both PTA and not.

Congrat's to everyone for their hard work. It was so gratifying to partner PTA  with CORE and DELAC to put together such a terrific event.