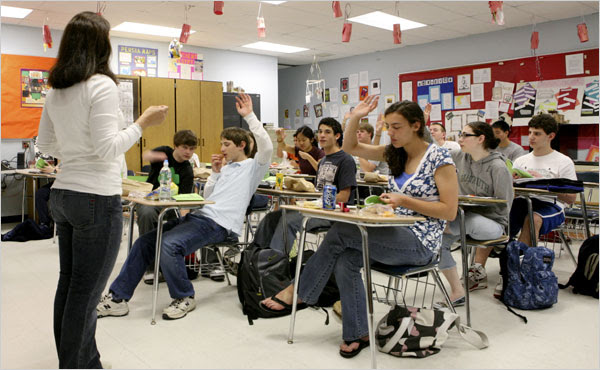 May 24, 2008 — BRIARCLIFF MANOR, N.Y. — High school students in this well-to-do Westchester suburb pile on four, five, even six Advanced Placement classes to keep up with their friends. They track their grade-point averages to multiple decimal places and have longer résumés than their parents.

But nearly half the students at Briarcliff High School have packed their schedules so full that they do not stop for lunch, prompting administrators to rearrange the schedule next fall to require everyone to take a 20-minute midday break. They will extend each school day and cut the number of minutes each class meets over the year. Briarcliff currently does not require students to have a lunch period.

In a school where SAT scores are the talk in the hallways and more than half the seniors are accepted to their first-choice college, Briarcliff’s principal, Jim Kaishian, said mandatory lunch is intended to reduce stress on teenagers so caught up in the achievement frenzy they barely have time to eat or sleep.

This year, 12 percent of Briarcliff’s 665 students have no free periods, while an additional 30 percent have classes the entire time the cafeteria is open.

“We see kids rushing to eat; we hear about stress levels going up,” Mr. Kaishian said. “We’ve watched as some kids implode and bend under the weight of having to go period after period without a break.”

Briarcliff is one of several high-performing campuses that is confronting the lunchless, alongside other stress-reduction measures like starting school later or limiting the number of A.P. courses each student can take.

At Horace Mann, a prestigious private school in Riverdale, the Governing Council passed a resolution in March saying: “All students, regardless of whether they want a lunch period, should have time to eat lunch outside of class.” In Chappaqua, Horace Greeley High is rolling out a new schedule this fall that lengthens classes, with a 30-minute free block in the middle of the day so that “students will have more time to eat in a less stressful way,” according to the superintendent, David Fleishman.

Across the country, Woodside Priory School, a Benedictine school south of San Francisco, not only added a mandatory lunch in 2005, but also a 30-minute snack break at 10:45 a.m. In nearby Palo Alto, the all-girl Castilleja School, which already required lunch, started setting out milk and fresh fruit all day and serving afternoon snacks of granola bars and trail mix. And in the Chicago suburbs, New Trier Township High School also considered mandatory lunch but dropped the idea after students protested that it would limit their chances to take electives like music, art and drama.

Here in Briarcliff Manor, the bright, spacious cafeteria often feels deserted. Those who do stop in for Boar’s Head deli sandwiches, yogurt parfaits, sushi or shrimp dumplings often sneak the meals into the library, where the media specialist, Tamara Hervey, said she is constantly picking up wrappers, napkins, soda cans and straws. Others take notes in class between bites of turkey and bologna sandwiches, chips, crackers and baby carrots; 15 of the 19 students in Ms. Carnahan’s 10:45 a.m. A.P. European History were eating the other day while reviewing for a test.

“I base my lunch on what’s going on in class that day, so if I have a test in European History, I’ll eat in Health or English,” said Elliot Tusk, 16, a sophomore who wolfed down Milano cookies. “The Health teacher is sympathetic, but you’re only allowed to eat healthy food in her class. If you have Gatorade or M&Ms, she’ll take it away from you,” he said.

Madeline Levine, a psychologist and author of “The Price of Privilege: How Parental Pressure and Material Advantage are Creating a Generation of Disconnected and Unhappy Kids” (HarperCollins, 2006), co-founded a project at Stanford University this spring, “Challenge Success,” that is working with a network of 50 public and private schools to reduce student stress and focus on developmental needs.

“Kids who are not eating, or eating under stressful circumstances are not cultivating healthy eating habits,” she said in an interview this week. “We want to send the message that a big part of growing up is how to manage yourself and not just getting good grades.”

Bob Sweeney, president of a counselors’ association in the Hudson Valley, said that many guidance departments are now advising students to strike a balance between a rigorous course load and a healthy lifestyle. At Mamaroneck High School, where Mr. Sweeney works, the whole school takes lunch from 11:06 to 11:58 a.m., when no classes meet.

“It’s the time of day when everything stops,” he said. “They really need that time to decompress and step off the treadmill.”

In anticipation of the new lunch policy, Briarcliff has spent more than $8,000 to expand the cafeteria seating area, ordering 14 additional tables and 140 chairs. It will also be adding a second cashier and deli worker, and revising the menu to include smoothies, more salads and ethnic foods.

To fit in two 20-minute lunch periods, the school has extended each day by 10 minutes, and moved to a rotating schedule of nine classes (only eight of the nine will meet each day). The overall instruction time in each subject will be an average of 7,100 minutes, rather than 7,200, per year.

While many parents support the enforced lunch policy, students complained that it could result in confusing schedules, longer lines in the cafeteria, less time for after-school clubs, and more homework because classes will meet fewer times.

Students will not be required to stay in the cafeteria, but neither will they be able to fill the time with a class. Elaine Rigney, 17, a junior who reads textbooks in the cafeteria sandwich line, said that she had already arranged with teachers to use their classroom computers during lunch next year.

“I would never put lunch before work,” said Elaine, who has a free block for lunch in her schedule this spring, but shuns the cafeteria to study in the library, and snacks in class on yogurt, cut-up red peppers and Wheat Thins.

With three honors and three Advanced Placement classes, Elaine said that her father, a corporate lawyer, lectures her that she will have an ulcer by age 20. But “everywhere you go, you hear college this and college that,” she said. “Now in junior year, with all the standardized tests and college visits, all I can think about is how things are going to affect my college application.”

Elliot Tusk, who eats most days in A.P. European History, said that even if it is unhealthy not to break for lunch, students should be allowed to make their own choices. He takes nine classes, fences every day after school and plays violin in a county orchestra, and said he sometimes skips both breakfast (to get 15 minutes extra sleep) and lunch (if he has multiple tests).

Though he loves food enough to write a restaurant column, “Eating with Elliot,” for the school newspaper, he said he sees weekday lunch as nothing more than a chance to refuel.

“You can’t eat for pleasure in school because you have to take notes in class,” Elliot said. “You can’t learn about the Holy Roman Empire and enjoy sweet peppers and chicken cutlets. It’s two separate parts of my brain.”