THE GIANT FOAM FINGER: Sandra Tsing Loh tries to create the perfect protest sign as she takes on education cuts.

Many of my public school mom friends are bemoaning the California  budget cuts, but have been too tired to fight back. "Also, I have to get ready for Haley's birthday party." "Plus this weekend, Sam has soccer finals."

But suddenly, the wind has shifted. Sam's soccer finals have now concluded, and L.A. moms have moved to the next thing on their list: flying into a hormonal rage. That's right, our city has now exploded into a giant estrogen ball.
There are budget-cut-protest rallies everywhere. Daily. Hourly. We're trying to post them on our own rally website, californiachildrensrally.com, but we can hardly keep up! I'm on the phone with Peter Dreier of the Pasadena school district. He's telling me about the Pasadena march from Blair High School May 31st.

And I'm going, "Is that the same as the May 31 South Pasadena march down Mission?" I imagine the two Pasadenas colliding in the middle in a big festive Rose Parade! Complete with all public school fans waving, football game style, at a big cut-out of Howard Jarvis, one giant foam finger!

Which was actually the brainstorm of my advertising friend Susan Nickerson. She and I were brainstorming big visual endings: balloons? Butterflies? Beach balls? For our June 17th California Children's Rally in Sacramento, 'round the 30th anniversary of the passage of Proposition 13. We were brainstorming while waving signs and chanting "All we want for Mother's Day are budget cuts to go away!" at another rally, thrown by Canfield Avenue moms Victoria Hurley and Maria von Hartz. This was joyously mid-Wilshire. 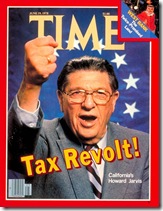 But Howard Jarvis was the image I kept returning to. Indeed, I thought a blow-up poster of Howard, who 30 years ago was the populist folk hero on  the cover of Time, would be good red meat to throw at the following week's PTA/CORE rally in front of the governor's offices. That's C.O.R.E., Californians Organized to Rescue Education, mad as hell moms from Calabasas/Las Virgenes.

I had this idea to have Howard on one side, say, "Who will make the cover of Time this year?" Flip the picket sign over and say, to the rabid moms: "You?"

Or maybe: "Your children?"

But Kinko's would not blow up the 1978 Time cover I printed off the Internet. Copyright laws! Corporate America strikes again! 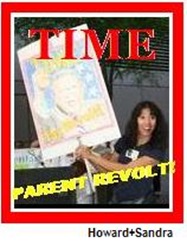 But I am my school's incoming PTA secretary. Or as I like to call it,  Secretary of Defense. My PTA Bible: Sun Tzu, Art of War. Chinese-German, I'm both passive-aggressive and aggressive.

So I hauled out my kid's artograph and traced a giant Howard Jarvis Time cover by hand. Come sue me now, Time Warner! See what kind of press that gets ya!

Because you know what they say: don't mess with us mamas.