In a recent fundraising appeal from the UCLA Alumni Association Sherry Lansing - a regent of the University of California and former CEO of Paramount Pictures - writes under the provocative headline: "It’s Clark Kerr’s fault": 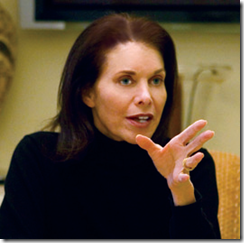 “Forty-seven years ago, the president of the University of California introduced an idealistic, untested and truly immodest plan to build the finest public higher education system in the nation.

“Happily, Doctor Kerr’s Master Plan succeeded, but there was an unforeseen consequence: It overperformed.

“Today, California’s public universities rank among the most highly regarded universities, public or private, in the nation or the world. Period.

“So, how can UCLA maintain that momentum, that excellence? How do we nourish this priceless community asset, this spectacular economic engine that enriches us all?

“Start with this reality check: “California state government funding for the university system has gone from 42% a generation ago to less than 18% today. And that money’s not coming back.

“One last thought: The future has been around for a very long time. It will be there tomorrow. But now is now.

'The momentum, the excellence, the need is now.”

Ms Lansing, if anything, underdescribes the impact, scope and sheer  audacity of Clark Kerr's plan, which created the UC system as we know it …and also the CSU

system and the Community College system, an overarching blueprint that reaffirmed California's long-time commitment to the principle of tuition-free education to residents of the state and a seat in the program — a promise that is being broken to current and future generations California students. The 1960 Master Plan did establish the principle that students should pay fees for auxiliary costs like dormitories and recreational facilities …but in succeeding years tuition has been imposed and then raised regularly in UC, CSU and Community College programs

Budget cutters, bean counters and sellers of the concept that excellence is unaffordable have trimmed, nibbled and line-item-vetoed away the California Master Plan for Higher Education, a law that remains on the books.

And Ms. Lansing sets her sights and expectations too low when she says that money is not coming back; as a regent she needs to audaciously, immodestly and abashedly insist otherwise.

Yes , there is room and opportunity and need for alumni and corporate and foundation support for higher ed; for donations and fundraisers. As there is for bake sales and gift wrap drives in K-12.

May 8, 2008 — California's three institutions of higher education have joined forces. They want to fight off a billion dollars in proposed budget cuts. They say if Sacramento makes the cuts, California's public colleges and universities will have to turn away tens of thousands of students next year. KPCC's Julie Small has more.

Julie Small: It's been almost 50 years since California adopted the Master Plan for Higher Education. The plan guaranteed admission to the University of California for the top one-eighth of the state's high school graduates. The top one-third would be assured places at California State University campus.

Diane Woodruff: It was the first time in history that a state, or a nation, promised that there would be a spot in higher education for every single high school graduate, and that if you attended a community college and worked hard enough, that you too could transfer to the best universities in the world.

Small: Take last year. About a hundred thousand students transferred from community colleges to four-year universities in California. A third of the UC's graduates, and a hefty 60% of the grads from the CSU system, transferred in. That's the way the system's supposed to work. But University of California Provost Rory Hume warns that the state's proposed budget cuts could throw higher education into reverse.

Rory Hume: It's at risk today, it's at risk from a level of cuts that is unprecedented in its cumulative effects.

Small: Budget cuts could mean a freeze on hiring faculty, and Hume says that could cost the UC a lot of young and talented professors.

Small: The UC might have to freeze enrollment, too. Students who can't get into the UC often head to the CSU, but they may find that door closing, too. Chancellor Charles Reed says the CSU turned away 10,000 students this year. The students who did get in could be asked to pay an extra 10% in fees. That's almost $300 a year; even then, that won't cover the millions in cuts.

Small: Students who can't get into the UC or CSU, or who can't afford the higher fees, can still find a place at one of 109 California community colleges. But Community College Chancellor Diane Woodruff says the budget cuts could mean many more students, but a lot fewer classes.

Woodruff: Because our community colleges are open access institutions and we're not able to limit the enrollment the way UC and CSU do, the real impact is that even when students get in, they can't get the classes that they need to transfer or to graduate on time.

Reed: California, as a state, has got to increase its revenue so that it can provide the government services that most good, healthy states provide.