“What we’ve got here is failure to communicate”: L.A. SCHOOLS’ iPAD EFFORT HAS A TWO-PRONGED IMAGE PROBLEM

Deasy needs to convince the public that poor children deserve iPads and that LAUSD can be trusted to run the $1-billion program wisely. 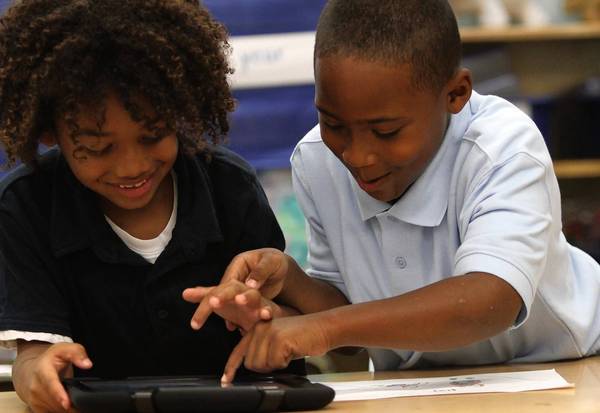 October 7, 2013, 8:18 p.m.  ::  It was a forum for Los Angeles Unified officials to promote the school district's ambitious plan to equip every student with an iPad.

But the first question on the televised call-in program last week had nothing to do with tablet computers.

Why doesn't the district train students in career skills, like machine shop, anymore, the caller wanted to know.

It didn't get much better as the hour wore on. Callers concerned about bond money, board politics and school district priorities didn't give Supt. John Deasy much of a chance to extol the virtues of his Common Core Technology Project.

The $1-billion project's image is certainly in need of a little sprucing up. Its rollout last month was dogged by embarrassing glitches:

No one seemed to know who pays if the expensive tablets are lost, damaged or stolen. Teachers hadn't been fully trained to use them. The plan to let students take them home was shelved after the first week, when high schoolers bypassed security features and accessed sites that were supposed to be off limits.

But the biggest obstacle to widespread acceptance may not be working out the distribution kinks, but rather convincing a jaded public that the school district's children — most of them poor — deserve such luxury.

The iPad is as much a symbol of economic and social status as it is a classroom learning tool. Deasy knows that; every interview he does includes an impassioned speech about leveling the playing field for disadvantaged students.

But instead of being a selling point in a district with so many low-income students, that perspective is at the root of some of the conflict and criticism.

"The program is going very well," Deasy said. "But we're struggling as a community.

"The issue is not money, not deployment, not training, not financing. It's, 'Yes or no, do these kids deserve this?'"

These kids are the ones who show up at school without breakfast; who live in group homes or shelters; whose families can barely afford to buy groceries, much less a computer.

Deasy has been driven in his 2 1/2 years as the district's leader to make sure those children have the same tools and opportunities that middle-class children have.

That social agenda — whether it's breakfast in the classroom or iPads in the backpack — tends to ruffle feathers in a district that's been divided for generations over what educational equity requires.

In the past, that's played out as a race to the bottom: In the 1990s, overcrowded schools in poor neighborhoods had to operate year-round. So the school board put every campus on a year-round schedule to create parity between, as one board member put it, "country club schools" in the suburbs and inner-city campuses where kids were "packed in like sardines." That didn't go over well with middle-class parents who lost their summer vacations.

This time, it's a race to the top. But iPads are stalled at the starting line by philosophical and political concerns that have less to do with their value in the classroom than with our city's evolving demographics, political differences and socioeconomic divide.

Some conservatives see the big-ticket investment as "nanny state" education gone wild: free preschool, free lunch, free iPads. Some liberals worry about privatization and the impact of big corporations, like Apple, on public school reform. Many baby boomers don't understand why Johnny can't learn to read without an expensive tablet.

And much of middle-class Los Angeles can't relate to families with high school students aiming for college who have to write their essays in longhand because a smartphone is the only technology their parents can afford.

"Are we going too fast? That's one of the big criticisms," Deasy said. "But why is it OK for the middle class to say 'slow down' with a certain amount of entitlement, while we ferociously debate the rights of children who have nothing?"

The iPad initiative isn't going to raise test scores, Deasy said. "It's only through good teaching that you're able to raise the scores. This is a delivery and application system, a tool that gives kids better access to phenomenal teaching."

It all sounds so techno-geeky, it's no wonder those of us still trying to figure out how Twitter works have trouble understanding the need for tablets in the classroom.

I do understand and appreciate Deasy's urgency. Now he has to understand that he inherited a school district that, after decades of dysfunction, most of us have trouble believing in.

Some of the blowback against iPads has been rooted in that distrust. It feels like "bait and switch" to voters who agreed to hike their property taxes to build and repair schools, and wound up footing the bill instead for expensive electronic gadgets that may need replacing every few years.

Deasy's passion is no match for the ire of a teacher stuck in a sweltering classroom where the air conditioner is on the blink. Or a parent whose child is saddled with rotating substitutes because the district can't afford to replace a teacher on maternity leave.

The rollout so far has been less than inspiring. It doesn't evoke much confidence to realize that officials actually believed that teenagers would heed their warnings not to log on to Facebook. Or that they're just now trying to figure out how to keep grade-schoolers safe walking through tough neighborhoods with expensive iPads in their backpacks.

I wish district officials hadn't dug such a hole for themselves with such haphazard planning.

For this to be more than another botched effort, the taxpaying public has to be convinced that it's a good investment.

We say we want a world-class education for children in this city. We understand that technology is a lever to success. We have to accept that we can't punish children whose families can't afford it, and expect those students to keep up in a world that's zooming forward.