L.A. district officials had said keyboards were not essential, but the new state standardized tests will require them, at a cost of about $38 million. 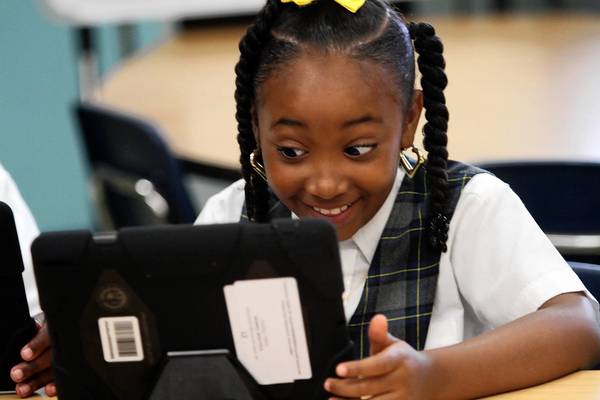 October 4, 2013, 9:07 p.m.  ::  Keyboards will be necessary for Los Angeles students to take new state standardized tests on iPads, an additional cost in the $1-billion effort to provide tablets in the nation's second-largest school system, The Times has learned.

In the past, L.A. Unified School District officials said that keyboards were not required and they removed them from specifications for an initial contract that went to Apple, maker of the iPad. Eventually, Apple is expected to receive about $500 million from L.A. Unified for the tablets. Other components of the project, including teacher training and expanded bandwidth, will cost an additional $500 million.

Against those expenditures, the price of keyboards would be modest, about $38 million, based on retail prices, less by district estimates. But it's a purchase that officials have yet to bring to the Board of Education.

The rollout of the iPads, which is taking place initially at 47 schools, has been exceptional overall, according to the district. But some serious problems have emerged, including incidents in which more than 300 high school students deleted security filters and browsed unauthorized websites. There has also been confusion over such issues as whether parents are liable for the iPads.

The tablets are meant to be the new way that teachers deliver curriculum tied to new state learning goals. They will also be used on new state tests.

This test "does require a mechanical keyboard for an iPad," said Jacqueline King, director of higher education collaboration for Smarter Balanced, which is developing the new exams for 25 states, including California.

On an iPad, "the keyboard pops up and will obscure part of the page, which is a problem" because portions of test items would be covered up, King said. "And for typing extended responses, a kid is going to be really slowed down by a keyboard that shows up on a screen."

The keyboard requirement was noted in materials published nearly a year ago, she said.

On Friday, the district insisted that it knew about the keyboard requirement all along.

"We have always known and have been crystal clear that we need wired keyboards for testing purposes," according to a statement from the district provided by spokesman Tom Waldman.

The district's public message, however, was that keyboards are optional, though a likely future purchase.

On Aug. 28, Chief Information Officer Ronald Chandler told a school board committee that the district had decided not to buy keyboards for the first phase of the project. Smarter Balanced recommends them, he said, but they are not required. He added that "the plan is to purchase them later on."

On Sept. 25, curriculum head Gerardo Loera said that the district would determine the extent to which keyboards are needed. He said he saw seventh-graders taking assessments who found the keyboard on the screen "easy to navigate."

District chief facilities executive Mark Hovatter said last week that the district had concerns about the wireless keyboards that Apple could have provided.

"They are more accessible to hacking and cheating" during a test, Hovatter said.

Smarter Balanced, however, does not share those concerns, and said the more salient issue is whether the system would slow down too much in a classroom full of wireless iPads and wireless keyboards.

The district prefers keyboards that are not wireless, Hovatter said. He estimated their cost at $28 million, based on prices submitted to the district. Keyboards wouldn't be needed for all students because the tests are taken in grades 3 through 8 and grade 11.

Keyboards were listed as an optional item in instructions to tablet bidders issued in March. The instructions said the intent was to meet testing requirements, but these aren't clearly specified.

The district said it will accept bids "in the winter" for a contract "to outfit the tablets for testing in 2015."

The testing will actually begin a year earlier — in 2014 — but that's only an issue if students take the test on their iPads.

L.A. schools Supt. John Deasy said Thursday, in an appearance on the district's television station, that students must take the new state tests on tablets. The statement was part of his case for the necessity and speed of the iPad project.

But the test makers designed the exams to work with older technology and software, such as Windows XP, to enable districts to use whatever technology they already have. And a paper and pencil version of the test will be available through 2018.

In fact, at the moment, the test cannot be taken on an iPad — not all the items will work properly on the device, King said. That problem, however, should be corrected by the time testing is to begin in March.