The Skeleton Crew: WITH MAJOR DEBT, PHILADELPHIA SCHOOLS CUT BACK ON NURSES

A sixth grader who died from an asthma attack after being sent home from school, a school that did not have a nurse on duty, has set off sadness, regret, and anger in Philadelphia where public schools are facing a huge budget shortfall. The district is a billion dollars in debt, schools have been closed and thousands of employees have been laid-off, including nurses. Now, Pennsylvania Governor Corbett released $45 million in funding this week to allow the school district to rehire hundreds of staffers, but not school nurses. The city is standing firm.

Eileen DiFranco joins us now from Philadelphia. She has been a school nurse for over 23 years. Mrs. DiFranco, thanks so much for being with us.

SIMON: From your point of view, how does this work? Ratio of one nurse for 1,500 students, I gather.

DIFRANCO: Yes. Although, the recommendations from the National Association of School Nurses recommends a much lower ratio - one nurse to 750 students. And we had that. We had that been up until a couple of years ago. Basically, nurses are assigned according to numbers and acuity. So for instance, I'm in my school full-time because I have a large proportion of special education students. However, most of my co-workers are going to two, three, four, five, six, some people even have seven schools. And some of them have to do several schools in one day.

SIMON: What if a youngster becomes sick when a nurse is not on duty - which obviously is a concern that's at the heart of this case that's caused so much attention?

DIFRANCO: The vast majority of schools have no vice principal, no counselors and we only have one secretary in most schools. So what happens in the nurse's absence is some member of the skeleton crew has to deal with a sick child. And those people are not trained medically. And we try to tell the superintendent that cutting back on their service was really not in the best interest of the children. We predicted that something horrible would happen.

SIMON: Would school personnel feel that they can call 911 if they need to?

DIFRANCO: Yes. Absolutely. If they knew to call 911, certainly they could call 911. You could have a student who may not look like he or she is in distress and he or she may not actually understand the severity of their own symptoms, and so neither one of them may really understand that 911 needs to be called. And what happens with asthma is that asthma is a very sneaky disease - and it's dangerous, as we know. With a trained professional, with a nurse on duty, when a students says I have trouble breathing or I have a bad cold, the first thing that we do is we listen with our stethoscopes and we can tell just by listening whether a child is in distress. Either the child could be wheezing very badly or there's no air movement, which is even more dangerous.

SIMON: A lot of students in Philadelphia have asthma?

DIFRANCO: Yes. I think almost 20 percent of the school population has asthma and individual schools may have higher percentages.

SIMON: You've worked in this school for over 23 years, right?

SIMON: How have things changed?

DIFRANCO: We just really don't have the support that we used to have. We used to have more nursing supervisors that were on hand to help us when we had questions. That's been reduced. Any extra hands that could have been helpful in handling an emergency, all of those people are on and everyone is pretty much flying by the seat of their pants. So in our school with 680 students, we have no counselors. The people who handle the mental health problems are myself and the dean of students and the principal.

SIMON: Is there anything you'd recommend that Philadelphia schools do right now?

DIFRANCO: The fact of the matter is, is the governor and the mayor and the superintendent are responsible for the children, and there needs to be some sort of conversation among the three of them with the taxpayers that our children are at risk. And to cut back necessary resources for vulnerable children is not in the best interest of the state. That conversation has not taken place, unfortunately.

SIMON: Are you closed off from the argument that although what happened to this young woman is tragic, it may not have been the cutbacks that were responsible for it, but other circumstances?

DIFRANCO: We'll never know what the story was. What I do know beyond a shadow of a doubt is the conditions under which we are working. Again, the skeleton crew, people who are extremely busy and taken up with a million different duties because there aren't enough people to do that. I think of educators as a caring web that surrounds all of our children. Well, there are gaping holes in that web that simply cannot be filled or have not been filled.

SIMON: Eileen DiFranco, who's the school nurse at Roxborough High School in Philadelphia. Thanks so much for being with us.

Note: The Student to Nurse ration in Philadelphia, decried in this national news story is  1500:1. According to the LAUSD District Nursing Website there are over 450 School Nurses who serve the health needs of more than 640,000 LAUSD students, creating an apparent student to nurse ration of  1442.1.  The California state average 2187:1

The following is from the heralded 2007-8 LAUSD Budget – the one before the cuts that the wishful thinkers aspire-to …and the powers-that-be see as utopian:

School Psychologists and related personnel are allocated to schools based primarily on student population size, type of school, and need for those services in the school population. 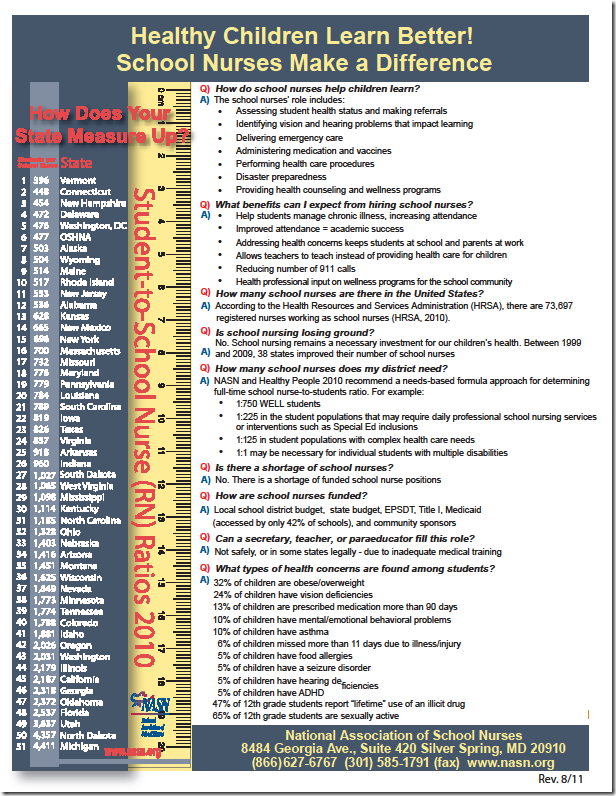