SEGREGATING ENGLISH LEARNERS IN SCHOOLS: The Los Angeles Unified School District has little choice in the matter. Yet there is reason for concern.

By The Times editorial board | http://lat.ms/1diY7qA 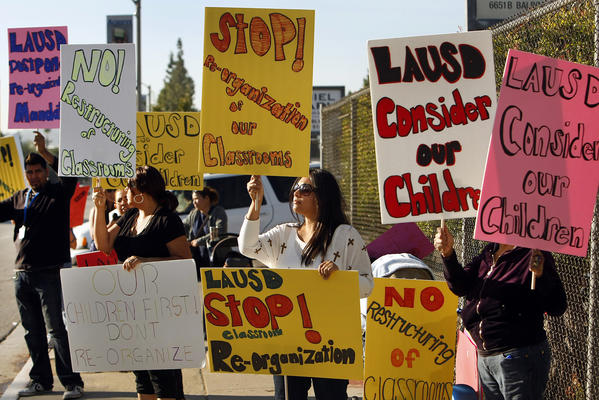 October 23, 2013  ::  Segregating young children for whom English is a new language according to their fluency levels produces the best academic results, according to most research. So the Los Angeles Unified School District has little choice in the matter. As a result of a settlement with the U.S. Department of Education, which had accused the district of doing poorly by its English learners, the district was required to submit an evidence-based plan for improvement, and that plan calls for sorting the students by English skills.

And yet there is reason for concern, especially considering American public schools' long and shameful history of labeling, separating and tracking students from the youngest grades on the basis of race and other characteristics.

Supt. John Deasy said the goal — indeed, the requirement under the settlement — is to move these students to fluency as fast as possible so that they can be quickly and fully integrated into mainstream classes. He points out, correctly, that Spanish-speaking students who appear to be learning English from their fluent peers are more often learning Spanglish, which can be sufficient to navigate daily life, but not the standard English that will lead them to higher education and better jobs. We have confidence in his intentions; Deasy is an unflagging champion of the rights of disadvantaged and minority students.

Children might benefit from true immersion in the language they're seeking to learn, but that's not what most L.A. Unified students, especially the Spanish speakers, receive on a daily basis. They generally attend schools where at least one of the playground languages is Spanish, and return to homes and neighborhoods where their first language is spoken almost exclusively. Most don't get enough incidental exposure to English to make them fluent.

We hope this plan will lead to more students learning English within, at most, a couple of years. Still, it could have significant downsides. If school authorities are not careful, they'll send the message to immigrant children and others who lack English skills that they aren't good enough for the "regular classes." That's something to be zealously avoided, and it's an important reason to move quickly to get English learners into the mainstream population.

Here's another problem: The district is forcing schools that haven't yet implemented the change to do so now, disrupting classes more than two months into the school year. L.A. Unified should at minimum ask the Department of Education to allow a one-year delay in those schools. The deciding factor must be what's best for the students, not what's best for the settlement agreement.