LAUSD's Richard Vladovic apologizes for outbursts throughout his career but denies recent accusations regarding alleged incidents 10 years ago. 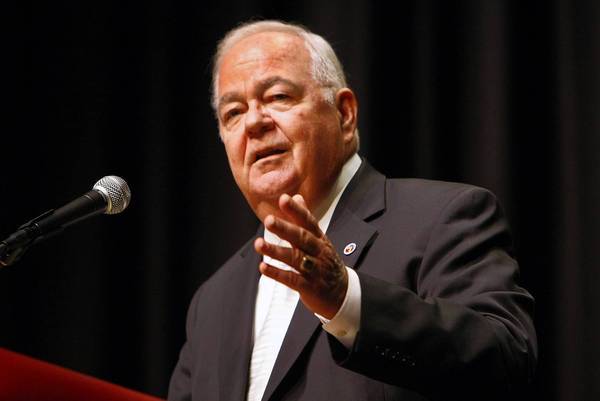 “I violated the district’s civility policy along with the board’s policy; for that I am truly sorry,” Richard Vladovic said in a statement. (Al Seib, Los Angeles Times / August 8, 2013)

"I violated the district's civility policy along with the board's policy; for that I am truly sorry," Vladovic said in a statement. "I also apologize to any employee who has felt intimidated because of my actions. In my capacity to serve the district I admit to having crossed the line and I intend to never do so again."

The statement reiterated comments he made at a board meeting Tuesday night.

Spokesman Mike Trujillo said Vladovic, 68, is prone to outbursts and is addressing that through professional counseling. Vladovic is working to learn "how to keep his emotions more contained," Trujillo said.

Vladovic was not apologizing for his alleged behavior outlined in Los Angeles Unified School District documents released Monday, Trujillo said, and denies those allegations. "They are all false," the spokesman said.

The sexual harassment allegations cover a period more than 10 years ago, when Vladovic was a regional superintendent — one of the top positions in the nation's second-largest school system.

An unidentified employee described an incident in which Vladovic allegedly handed her a "swinger's" magazine to look at. Another incident, she said, involved an off-color joke. A third allegation described Vladovic flying into a rage about another employee and using a slur about the person's sexual orientation.

The employee also complained that Vladovic pressured her to spend $100 to purchase African attire to wear to a cultural event. And she accused Vladovic of intimidating subordinates by keeping a book decorated with an eye, denoting employees he wanted to keep an eye on.

The veteran employee, who dated her letter of complaint June 8, 2013, noted that a district investigator said her complaints, encompassing a period from 2000 to 2003, were too old to take action on.

The second complaint is dated June 28, 2013. This employee talked of hearing from a supervisor that Vladovic, as a board member in 2011, had demanded the employee's dismissal for failing to provide him with important information about what was going on in his South L.A. and San Pedro-area board district.

The employee said Vladovic was operating outside the chain of command both in the request and with his subsequent reaction.

This employee described a series of alleged snubs, saying they represented "a history of gross mismanagement, abuse of authority and violations of district ethics policy."

Vladovic has also had two confrontations with Deputy Supt. Jaime Aquino, who announced his pending resignation recently over the board's "dysfunction" and "micromanagement."

Vladovic was the subject of two investigations this year. One cleared him of any wrongdoing related to the alleged mishandling of sexual misconduct allegations against a teacher at George De La Torre Jr. Elementary in Wilmington.

The second was into whether he had crossed legal or ethical lines in alleged verbal abuse of employees.

News of the investigations leaked out just before Vladovic sought the school board presidency. At the time, L.A. schools Supt. John Deasy threatened, out of public view, to resign if Vladovic were elevated. Vladovic's colleagues chose him as president, and Deasy, who denied involvement in the investigations or the leaks related to them, stayed on.

The timing of the investigations and subsequently the release of the allegations this week is "suspicious," Trujillo said, declining to be more specific.