The longer print versions of the two most recent iPad stories were not posted properly online (by The Times). I guess we have glitches, too. Links next—

The middle schools still want the tablets, but only after L.A. Unified addresses questions about hacking and responsibility if a tablet is lost or broken. 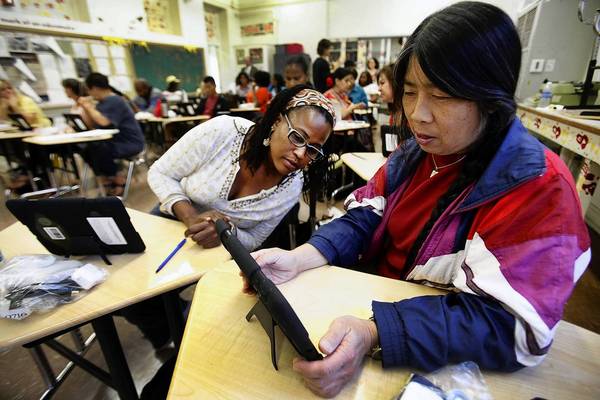 October 14, 2013, 10:01 p.m.   ::  Four Los Angeles schools, scheduled to receive iPads in this first rollout of the tablets, have pulled out of the initial phase, saying that they want to wait at least until security and other issues are resolved.

The rejection apparently is temporary — the schools still want the tablet computers — but their stance underscores ongoing problems faced by the L.A. Unified School District as it attempts to provide every student with a tablet over the next year.

Separately, a state legislator is calling for an oversight hearing to review the $1-billion project, which is funded by school-construction bonds.

"The principals are very excited about their future deployments," said district spokeswoman Shannon Haber. But, she said, "they wanted to wait until the minor security issues and parental issues are ironed out."

The principals declined to be interviewed.

Some notable problems have emerged, including incidents at three high schools where more than 300 students deleted security filters and browsed unauthorized websites. That problem resulted in the tablets being turned in by all students at those three campuses; at others, the devices are being used only at school. There also has been confusion over such issues as whether parents are liable for the iPads if they are lost or broken.

At Muir, the equipment is on campus and locked up securely, awaiting distribution. Interim Principal Jose Gonzalez decided to hold off because he worried about lost instructional time if students had to check out iPads and return them every day, said Veronica Melvin, head of L.A.'s Promise, the nonprofit that oversees the school.

The hope is that the district will resolve security issues soon so students can carry the devices to and from class and school, Melvin said.

The tablets are meant to be the conduit for curriculum tied to new state learning goals. The devices also are expected to be used for new state tests. Overall, senior district officials have said the tablet initiative is going well and that start-up glitches were inevitable.

The schedule for handing out iPads, however, has been slipping, falling back nearly a month in some cases. The first phase was intended to provide the tablets to students at 47 schools.

L.A. schools Supt. John Deasy had planned to move ahead quickly with a districtwide rollout. A committee that oversees school bond spending was expected to vote on his proposal this month, followed by the Board of Education in November.

That timetable has also shifted back a month. One problem is that the district has not completed a full financial analysis, said Thomas Rubin, consultant to the bond oversight committee.

"We're talking about a financial plan that shows a fair degree of details about how the entire program will be paid for," Rubin said. The committee wants more specifics on spending and funding sources for more than 600,000 tablets, software, training, curriculum, wireless Internet upgrades on campuses and more, he said.

"We want to make sure we believe this is a legal use of bond money," Rubin said.

The committee also wants to see the strategy for replacing the $678 iPads, which come with a limited three-year warranty.

A delay might be the best scenario, school board member Bennett Kayser said.

He said it makes no sense to risk spending $1 billion and then learn "that we're actually slowing the kids down by bringing in new technology that may or not be working."

Another cautionary note was sounded Monday by state Assemblyman Curt Hagman (R-Chino Hills), who is seeking a legislative hearing on the iPad project.

"I don't believe the right steps have been taken to ensure proper execution and smooth operation of this project," Hagman said in a letter requesting the hearing. "It is essential that complications are corrected before more devices are distributed."

Supt. John Deasy is on board with a plan that would extend by a year a $1-billon school tablet program, after problems emerged during initial distribution. 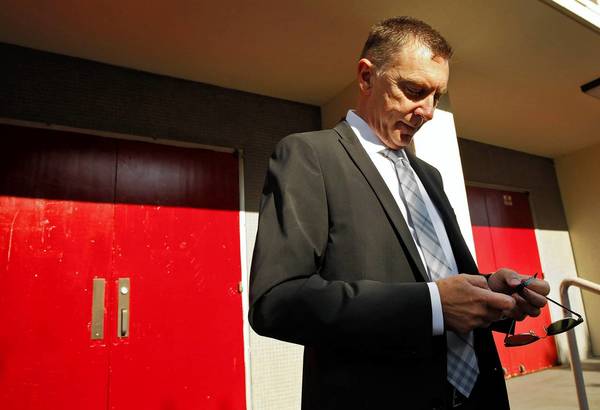 Los Angeles Unified School District Supt. John Deasy has conceded to slowing down the iPad rollout. The plan is set to go before the school board for approval in December. (Al Seib / Los Angeles Times / August 8, 2013)

October 17, 2013, 10:39 a.m.  ::  The rollout of a $1-billion school iPad program would be extended by a year under a new plan by the Los Angeles Unified School District, doubling the time originally allotted for getting tablets to every student.

The slow-down is a substantial concession by L.A. schools Supt. John Deasy to critics inside and outside the system who questioned whether the district has been pushing too fast in distributing about 650,000 devices to teachers and students.

Problems quickly emerged during efforts to provide the devices to 47 campuses this fall. At three high schools, more than 300 students deleted security filters and browsed unauthorized websites. As a result, all students were required to turn in tablets at these campuses; students at other campuses must use the devices only on school grounds. There also has been confusion over issues such as whether parents are liable for the iPads if they are lost or broken.

Deasy has defended the pace and scope of the program as a civil rights imperative: to give low-income students in his school system the same digital advantages as more prosperous families.

In the face of eroding support on the Board of Education, however, Deasy on Tuesday adopted a conciliatory tone.

"I am hopeful that this revised plan meets the concerns of board members over how best to provide our students with the technology they need to excel in the classroom and succeed in their careers," Deasy said in a statement.

Deasy and Deputy Supt. Jaime Aquino told The Times they've decided that a slower pace will lead to a more effective result — logistically and academically.

As a result, tablets would not be widely available for new state standardized tests that will be given online this spring. Schools could use older computers instead and rotate students through computer labs as needed. And iPads also could be lent to schools for testing purposes, officials said.

Deasy said the new plan also includes speeding up training for teachers, so they are better prepared when the iPads arrive for students.

The district also will examine whether it needs to hire more staff or use trainers differently, Aquino said.

Even the revised schedule could prove ambitious in the nation's second-largest school system. Deasy hopes to secure board approval for it at a meeting in December.

In a memo to the school board, the superintendent said that "we have experienced a high degree of criticism from public, external, and internal audiences.... We have received criticism about us moving too fast."

At the same time, he said, "others feel we are moving too slowly in providing students access to educational technology."

"Criticism is good," he added, "in that it allows us to make adjustments and course corrections."

It's not clear whether the extension will bridge key differences between Deasy and some board members. Bennett Kayser said that he would prefer to evaluate the academic impact of iPads before committing $1 billion to the effort.

Four middle schools already had applied the brakes, opting out of being among the first to receive the tablets. Other schools scheduled to have received iPads are still waiting.

U.S. history teacher Jeffrey Williams was relieved to learn that his principal at Daniel Webster Middle School was choosing to wait.

"There's a lot of uncertainly among the faculty about how they were going to use the iPads and protect the iPads and make sure the students were using them correctly," Williams said.

Roosevelt High students were told to turn in iPads about two weeks ago, after more than 200 of them deleted security filters. The school collected the last four Tuesday by going directly to students' homes.

In response to a survey, 59 Roosevelt teachers, out of about 100, said they would like to use the tablets again as soon as possible. The school is waiting for L.A. Unified to configure the devices so that teachers can keep them in their classrooms.