As the most recent example at Weigand Avenue Elementary School in Watts shows, parents need more information before taking such drastic action. 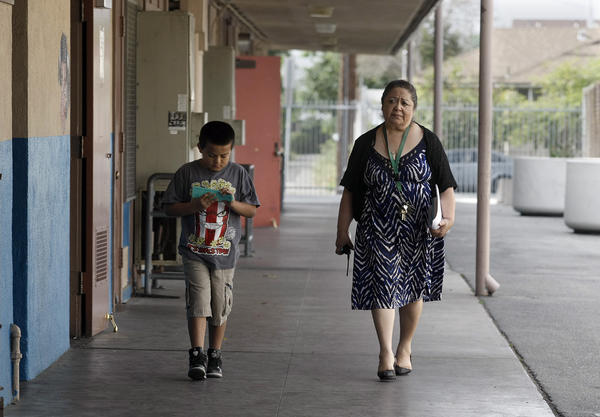 Irma Cobian, right, principal at Weigand Avenue Elementary School, walks with Jose Luis Torres, a 3rd grade student. The Los Angeles Unified School District voted to accept a parent petition to remove Cobian at the low-performing school although she has led efforts to craft a turnaround plan this year that was highly rated by the district. (Los Angeles Times / May 15, 2013)

June 2, 2013  ::  From the start, the most serious problem with California's promising but sloppily written "parent trigger" law has been its failure to require an open, public process. That's especially troubling when the law's power is considered closely. If half or more of parents at an underperforming public school sign a petition, they can force dramatic change in how the school is run — they can turn it into a charter school, for example, or require that the principal or the entire faculty be fired.

But that means these documents aren't so much petitions as they are votes. Through majority rule, parents don't request reform; they require a governmental agency — the school district — to take action.

Yet these petition drives differ from most elections. There is no public balloting place and no mechanism to ensure that all of those eligible to "vote" — i.e., the parents of the school's students — are notified. No public forums or debates are held to guarantee that parents hear both sides of the issue. This process does a disservice to parents, some of whom miss out on opportunities to become more informed about their options — or in some cases even to know that a petition drive is underway — before nearly irreversible decisions have been made. Yet neither the Legislature nor the state Board of Education has moved to fix these problems.

The most recent trigger petition, at Weigand Avenue Elementary School in Watts, makes the need for revamping the law more obvious than ever. A petition requiring the removal of the principal, Irma Cobian, was signed by 53% of the parents. According to organizers, the parents didn't want a charter school and wanted to keep all the teachers. But they apparently weren't aware that many of those teachers thought highly of Cobian. After the petition was accepted by the district, 21 of the school's 22 teachers indicated in writing that they would seek to transfer from Weigand, and some parents expressed regret over signing the petition.

Weigand's test scores are low, but it's unclear how much of the problem rests with Cobian, who has won praise for some of her work. The teachers see the petition not as a vote of confidence in them but as a repudiation of their efforts, which include a turnaround plan led by Cobian that was praised by Supt. John Deasy and was about to be implemented. None of this makes the parents who signed the petition wrong, but many were stunned to learn that the teachers didn't share their views.

This misunderstanding would undoubtedly have been avoided if there had been a more public airing of opposing views. A compromise might have been reached — or maybe not. But parents would have heard both sides.

Reformers might fear that a more open process would lead to more misinformation and even intimidation of parents by teachers or others with a vested interest in the status quo, but a closed petition means that parents are shut off from debate and discussion that lead to truly empowered decision-making.