INGLEWOOD UNIFIED'S FINANCES WORSEN DESPITE A STATE TAKEOVER AND AN INFUSION OF CASH: There is even talk of dissolution 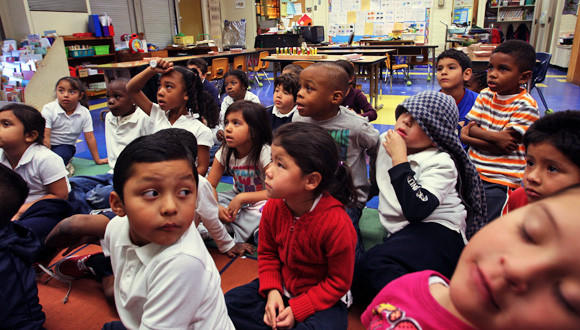 Kindergarten students listen to their teacher as she reads them a story at the Bennett¿Kew Elementary School in Inglewood in December, 2011. (Genaro Molina / Los Angeles Times / June 10, 2013)

June 9, 2013, 5:31 p.m.  ::  Many in Inglewood thought the city's struggling school district had been handed a lifeline last year when the state Department of Education took the reins, hiring new leaders and infusing the school system with $55 million in emergency loans to get it back on track.

But in the nine months since the state takeover, the district's slide has gotten worse.

Inglewood Unified has depleted its reserves, burned through nearly half of the emergency funds in one year and is operating at a $17.7-million deficit that calls for deep cuts. Teachers, parents and students say they are angry at the prospect of suffering the brunt of consequences of inept management while deserving none of the blame.

Many in the community now view the state administrators as intruders rather than saviors and question their qualifications. State officials contend that the anger is misplaced.

Budget woes are exacerbated by students fleeing the district for nearby charter schools that have been wooing them — and the funding that comes with them.

The district, meanwhile, won't get more emergency money. Without scaling back, officials say, the school system could be dissolved.

For the controversy and anger it has incited, the state takeover of the district mirrors others in California. But the way it has unfolded does not: Rarely is the possibility of dissolution discussed so publicly, nor has there been such a dense population of charter schools nearby to pull students from a faltering district.

With state funding tied to student enrollment, steep drops can both contribute to the financial collapse of districts and complicate their recovery, said Randy Ward, the San Diego County superintendent of schools, who served as the state-appointed administrator of the Oakland and Compton school districts during their respective takeovers.

In Oakland, the district was losing more than 2,000 students a year before the takeover in 2003. Years of overestimating enrollment — and accordingly the expected revenue — damaged district finances, Ward said. And as plunging enrollment continues during a recovery, it creates even more difficulties as districts try to climb out.

"As soon as you filled the hole with cuts, you would lose the revenue and a new hole would be created," Ward said. "You have the perfect negative storm in terms of revenue and expenditures."

Similar miscalculations caused some of the budget problems in Inglewood, officials say.

When the state moved into the debt-saddled school system, Kent Taylor, an alumnus, was appointed as the state monitor — essentially the superintendent in charge of all operations.

But Taylor resigned within two months, after the Department of Education's discovery that he had made a tentative agreement with the teachers union. State officials say he had no authority to enter into such an agreement.

His deputy, La Tanya Kirk-Carter, took over, to the chagrin of much of the community. She has been met with anger and distrust. Many in the community, among them teachers, parents and unions, contend that Kirk-Carter is not qualified to make the changes necessary.

Kirk-Carter presided over a raucous community meeting last month in which she, along with other state officials, were grilled by teachers, parents and students. The crowd shouted and yelled at them.

"It was without a doubt the worst day of my career," she said.

The anger, though understandable, is completely misplaced, Kirk-Carter said. "I didn't break this district," she said in a recent interview. "It was broken when I got here, and we discovered that it is even more broken than we thought."

Kirk-Carter says she never wanted the position and was not brought in to be the face of the takeover in public, but rather to work behind the scenes to sort out the finances. "I'm the nuts-and-bolts girl," she said. "I was hired to fix the district."

Kirk-Carter plans on closing the $17.7-million hole by moving one high school to a larger site to accommodate more students, converting a K-8 school into a district-run charter to allow students from the entire district to attend ,and combining two underenrolled elementary schools. Along with a few other cuts, officials expect that to trim the gap by about $6.6 million.

About 12,000 students attend schools in the district.

In Compton, Ward received threats that law enforcement deemed credible and, like Kirk-Carter, he had a security detail. At one point, he asked the FBI whether he should consider carrying a weapon while off duty and away from campus. "Their response to me was, 'Hurry up,'" he said.

Kirk-Carter has California Highway Patrol security paid for mostly by the state and in part by the district; the cost doesn't exceed $200,000. Community members say the expenditure is unnecessary.

State officials have made one thing clear: Employees will be affected. About 72% of district expenditures are for salaries and benefits.

Peter Somberg, president of the Inglewood Teachers Assn., said the union would not return to the bargaining table. "We have a contract," he said, referring to the agreement made under Taylor.

The state has said repeatedly that the contract is void. The union in turn brought an unfair labor charge against the district.

Somberg said the proposed pay cuts of about 15% would be devastating to many of his members and that the state has yet to develop a long-term plan for stability. Rather, he said, the state is presenting a doomsday scenario to try to bring the union back to the table.

"If someone tells me they want to be my partner," he said, "they usually don't do it with a gun to my head."

At the contentious public hearing at Morningside High School, state officials provided handouts that spelled out the grim budget outlook.

"Despite our challenges, Inglewood's schools are open and educating children every day," the letter said. "The state's intervention means students can keep right on learning as usual."