Proposed by Gov. Jerry Brown, the LCFF would provide districts with a base grant of about $6,800 per student, with additional money allocated for English-learners, foster children and students from low-income families. LAUSD expects to get an additional $188 million if the Legislature approves the proposal as part of the budget that must be passed by June 15. 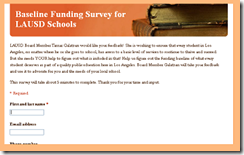 Because of concerns that schools with relatively low numbers of disadvantaged students might be short-changed, Galatzan is trying to determine basic staffing levels that campuses would need to survive. The survey is at Galatzan's website, galatzangazette.com.

smf: NOW WE KNOW HOW TO USE THE MULTIPLE CHOICE BUBBLING SKILLS learned in standardized testing: Ms. Galatzan (who missed the discussion Tuesday) is circulating an online poll with multiple choices and bubbled in answers on how LAUSD should set its budget priorities: BASELINE FUNDING SURVEY FOR LAUSD SCHOOLS. Far better than a poke in the eye with a sharp stick …but better no stick at all. And bear in mind what LAUSD Chief Financial Officer Megan Reilly said at Tuesday’s meeting about baseline funding: The base is the absolute lowest level of funding: barely adequate if that.

The choices are not: Do you want an Elementary Librarian or a School Nurse and how many hours are adequate for each? Schools need a librarian there when the library is open so kids can study and read check out books. You need a nurse at the school when students need a nurse. We don’t decide these things in an online poll or a popularity contest at the schoolsite. The Board of Ed needs to decide, as former boardmember Warren Furutani said, that a school without a staffed library does not fit the definition of a school.

The board will set priorities and pass a budget on June 18th, three days after the statutory deadline for the state’s budget on June 15th …which may or may not be met. Actually, it won’t be an actual state budget even then – it will be a budget delivered to the governor’s desk where he will veto and blue pencil items before he sends it back to be tweaked and trailer-billed into implementing legislation. The state budget won’t be said-and-done until after July 1st – when a new Board of Ed takes office. And a new school year, 2013-14 - ripe with promise and anticipated fiscal windfalls - begins.