L.A. BOARD OF EDUCATION WILL WEIGH BROAD CHARTER EXPANSION PLAN 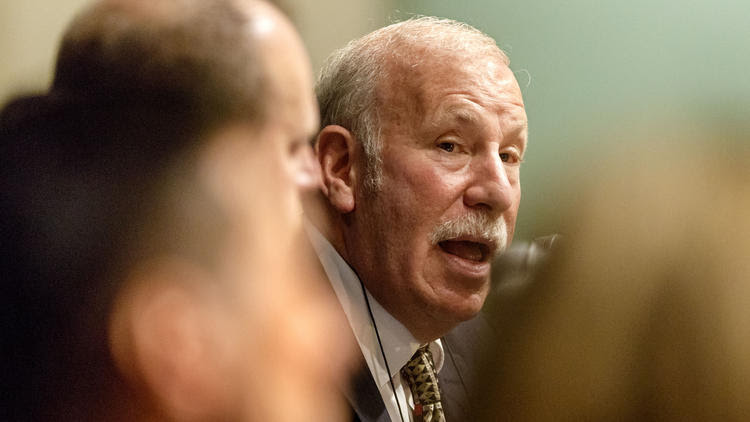 Nov. 9, 2015  6:53 AM  ::  Members of the Los Angeles Board of Education will be under pressure to take a position on a controversial plan to expand local charter schools because of a resolution being introduced at its meeting this week.

The measure, sponsored by board member Scott Schmerelson, (follows) calls for the district to go on record against the expansion, which would move half of district students into charter schools over the next eight years. The charter plan is being spearheaded by the locally based Eli and Edythe Broad Foundation. Efforts to develop and fund the plan were disclosed by The Times.

The resolution, which needs four votes to pass, states that the school board “opposes the Broad Foundation plan and all initiatives that present a strategy designed to serve some students and not all students.”

Under board rules, a resolution first is introduced for public review, then voted on at a later meeting, typically the next one.

Behind the scenes, the teachers union, United Teachers Los Angeles, has been urging the board to take action and found a sponsor in Schmerelson, a retired administrator who was elected with substantial financial backing from the union.

School board president Steve Zimmer also is on record against the Broad proposal. Three other board members—Richard Vladovic, Monica Ratliff and George McKenna—have expressed reservations about the charter expansion. And two board members—Monica Garcia and Ref Rodriguez—said they support giving parents choices that include charters as well as strong programs in district-run schools.

Teachers unions and their allies have squared off with Broad and his supporters in recent and costly school board elections. Additionally, the union does not support the types of changes and accountability measures favored by Broad and some influential foundations. Most charters are non-union.

State law requires L.A. Unified to approve valid petitions for new charter schools, so it isn’t clear what powers the board would have to stop the expansion. About 16% of district students attend charters.

The Broad Foundation has defended its plan as an effort to provide more students with a high-quality education. A spokeswoman characterized a written version obtained by The Times as a "preliminary discussion draft.” Some local charters have been among the best-performing campuses on state standardized tests.

Schmerelson’s resolution echoes rhetoric recently used in teachers union rallies by referring to charters as privately operated and unregulated—and by suggesting that they don’t serve all students.

In California, charters are authorized by a local government agency, usually a school district. But the authorizer has no day-to-day control over the charter, which has its own board of directors. Charters are exempt from some rules that govern traditional schools, but under state law, they must accept all students who apply, space permitting. Even so, critics have accused some charters of pushing away students who are more challenging or more expensive to educate.

The resolution also refers to an independent financial analysis, being presented to the school board this week, that concludes that the movement of students to charters could threaten the financial viability of L.A. Unified—unless the district sharply reduces spending or services or unless it can maintain and even increase enrollment.

Another resolution being introduced at Tuesday's meeting is intended to make charters provide more information to the public and to parents who enroll their children in them. The disclosures would include alerting parents when a charter is in danger of closing and supplying information about the salaries of charter employees.

The meeting also is scheduled to include votes on 18 petitions for charter schools. District staff is recommending the denial of two submitted by the Celerity group, although two existing Celerity campuses are recommended for a five-year renewal. Celerity is among the groups singled out as possible participants in the Broad plan. The group also has been organizing for a possible national expansion.

Scott Schmerelson’s resolution was posted as an amendments to the Nov. 10th Board of Ed Agenda at 12:55am on Saturday morning Nov 7th.


Whereas, The recently released report from the Los Angeles Unified School District (LAUSD)
Independent Financial Review Panel indicates that declining enrollment is one of the critical
issues that LAUSD needs to proactively address in order to remain fiscally viable and be able to
provide a high quality, full service public education for every child who enters public schools in
Los Angeles;

Whereas, The recently released “Plan for Great Public Schools” from the Eli Broad Foundation
seeks to aggressively move over 250,000 students from LAUSD public schools to privately
operated, unregulated charter schools;

Whereas, The Broad Foundation plan does not address the impact, implications and potential for
collateral damage to the approximately 300,000 students who would be left in an LAUSD system
precariously drained of resources, programs and support systems; and
Whereas, The Board of Education passed the “Believing in our Schools Again” resolution
directing the Superintendent to identify successful programs within the LAUSD including but
not limited to magnets, International Baccalaureate programs, Dual Language Immersion
programs, STEM/STEAM programs, and Pilot schools and develop a comprehensive strategy to

grow these programs and strengthen instruction and support at neighborhood schools;

Whereas, The Independent Financial Review Panel made similar recommendations for
investment in successful LAUSD programs;

Whereas, The Board of Education serves as both the authorizer of the largest number of charter
schools in the nation and is responsible for ensuring an excellent educational program for over
540,000 students in LAUSD schools and programs;

Whereas, Rather than sharing the best practices between robust LAUSD programs and
innovative charter schools, the recent tactics of saturation and strangulation create unnecessary
competition for precious resources and divides students and communities;

Whereas, The Board of Education is committed to the most important and comprehensive
education equity mission in the nation and must have the needed resources to implement the A-G
for All resolution, the School Climate Bill of Rights, the Equity Index and other essential
initiatives to ensure 100% graduation of all students who are college and career ready; now,
therefore, be it

Resolved, That the LAUSD Board of Education of the City of Los Angeles opposes the Broad
Foundation plan and all initiatives that present a strategy designed to serve some students and
not all students;

Resolved further, That the LAUSD Board of Education directs the Superintendent to analyze all
external proposals targeting LAUSD for their impact in terms of enrollment, fiscal viability and
LAUSD’s ability to provide an outstanding public school education with comprehensive student
and family supports before that proposal is considered by the Board; and, be it finally

Resolved, That the Board of Education redouble its efforts and its investments in growing
programs of instructional excellence that serve all our students.