¿Flip-Flop? - Council of Great City Schools’ Casserly: A CAP ON THE AMOUNT OF TESTING TIME IS THE WRONG ANSWER FOR SCHOOLS + smf’s 2¢ 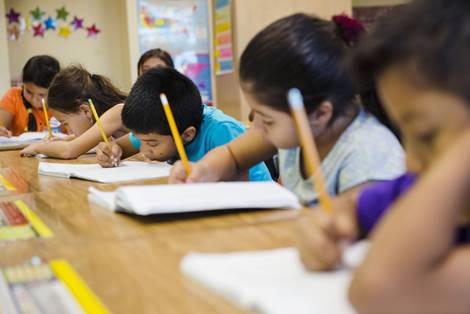 Oct 30, 2015 :: You’ve seen the images: Students hunched over desks, pencils in hand, taking tests. And you’ve read the headlines about the stream of testing in our nation’s schools. Over the past several years, parents across the country and people in the nation’s educational community have been swept up by a growing controversy over standardized testing. Where did all these tests come from? What are we measuring? Are there just too many? While it is hard to answer these questions precisely, a new study by the Council of the Great City Schools can help inform a conversation that has largely consisted of dueling anecdotes.

What did we learn? We now know that the average student in one of our big-city school districts will take some 112 mandatory standardized tests between pre-kindergarten and 12th grade. That’s roughly eight a year that consume approximately 20 to 25 hours each year, and that doesn’t include sample tests; optional tests; tests for Advanced Placement, technical education and other such programs; tests given to special populations; quizzes and tests given by individual teachers; or time to prepare for any of these tests.

Is this too much? It depends how you look at it. Our schools clearly test more and for different reasons than other high-performing nations. At the same time, these mandatory tests absorbed only about 2.3 percent of students’ time over the school year, and the time devoted to them did not affect student outcomes on the National Assessment of Educational Progress in reading and math. In fact, the time devoted to taking tests pales in comparison with how long a student might spend in football practice or some other extracurricular activity.

Nonetheless, there are clearly a lot of tests. They are often redundant, not aligned to college- and career-ready standards and not used for the purposes for which they were designed. It is not even clear that the results are used consistently by administrators or teachers to help support student growth.

Who’s to blame? It was not our intention to say who’s right and who’s wrong, but it appears to us that there is more than enough blame to go around. Congress, the Education Department, states, local districts and even individual schools all contribute to the mindless jumble. This has resulted in an assessment system that is largely incoherent and uncoordinated. It will take a concerted effort to come up with a smarter approach.

So what do we do? At this point, some thoughtful and balanced discussion would be more constructive than the shouting and finger-pointing that have characterized much of the debate until now. That is why we are establishing a commission of educators, students, parents and members of the public to develop a blueprint for an assessment system that makes sense.

Inevitably, there will be factions that cherry-pick findings from our study to bolster their agendas. Some have called for a moratorium on testing. This would be as intellectually bankrupt as the system we have because testing is, in fact, critical to our success. When done right, testing tells us how we are doing educationally as a nation, tracks our progress, diagnoses student needs and has exposed the intolerable achievement gaps that persist in our schools. Returning to a time when we were able to mask the uneven academic attainment of students of color, poor students, English learners and students with disabilities is not morally viable.

The Obama administration, for its part, has taken an important step by acknowledging its role in the proliferation of tests. It has also made several thoughtful proposals to reduce the amount of testing. One of its proposals, however, stands out as a singularly bad idea: a blanket cap on the amount of testing time. This strikes us as a classic example of Washington trying to solve a political problem instead of the real problem. The limitation doesn’t address the underlying fact that tests aren’t well coordinated or aligned. It wouldn’t solve the considerable redundancy of testing. And it doesn’t address issues of test quality or the inappropriate use of tests.

What the proposed testing cap would do is add to the noise and contentiousness of the issue, and cause chaos as districts struggle to implement the new federal edict. If put in place, we predict that new fights would break out over how the caps are defined, and that tests backed by powerful interest groups would remain untouchable, while tests that provide teachers with the data they need would be cut. Ironically, we also expect that the tests that were left would be mainly federally mandated tests, further eroding local discretion. In short, when the smoke cleared, the testing landscape could be even worse, rather than better, than the one we have today.

In the polling we did with parents as part of this project, they reported loud and clear that they want good information on how their children are doing academically, whether they are on track and whether they will be ready for college and careers when they graduate. That should be the square we start from — not an arbitrary limit built more for the headlines than the classroom.