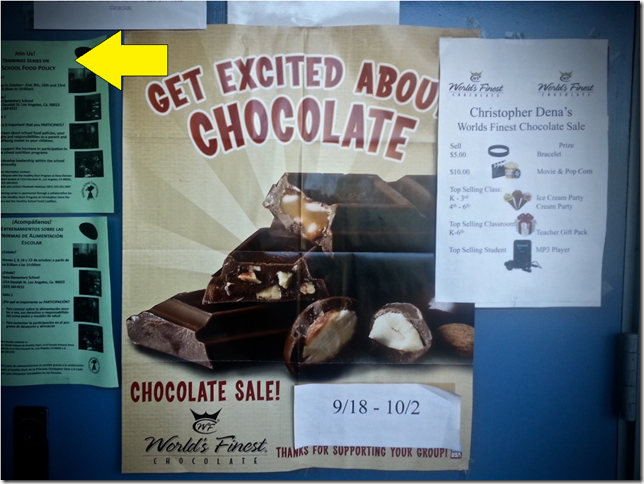 At Dena Elementary School students and guests were greeted by a Worlds Finest Chocolate Sales Brochure on the front door of the school. Right next to a flyer for a food training about junk food policies

November 13, 05:01 AM  :: The McDonald’s on Whittier Boulevard in Boyle Heights is jammed on a recent weeknight.

Outside, a bright yellow poster welcomes customers to "McTeacher Night." It’s a fundraiser that funnels a portion of the evening's proceeds to nearby Stevenson Middle School. Behind the counter, teachers watch over the French fryer and assemble orders onto trays.

As sixth grader Ruby Flores enjoys her meal of McNuggets and Frappes, she says she wishes she could get this food at school.

A number of parents at the fundraiser are less enthusiastic about the evening's proceedings – some say they’re only here because their child insisted on coming. (Teacher groups have protested McTeacher night in the past.)

Ofelia Gonzalez brought her son and his friend to McTeacher Night. While the sixth graders sip sodas and chomp on fries, Gonzalez echoes a complaint heard from several parents.

"They're trying to make everything healthy at school but they're having a fundraiser here at McDonald's," she says. "What are they serving? All greasy food, soda, fries."

Dr. Pepper, Quarter Pounders with Cheese and Chicken McNuggets are not exactly on the Los Angeles Unified School District's list of approved foods and beverages, but this event does not violate district policy.

It's been more than a decade since L.A. Unified banned sugary drinks and fatty foods from school menus in favor of healthier meals. But the district's rules permit the sale of junk food at off-campus events, and, as long as it's after school hours, during on-campus activities as well. Those exceptions, say some parents and activists, undercut the spirit of the healthy food policy.

"We're trying to create and build different habits and make healthier food choices," says Elizabeth Medrano of the Urban and Environmental Policy Institute at Occidental College. The Institute was instrumental in getting the district to ban sodas and adopt higher nutrition standards.

"So when we see that people are still engaged in fundraising through chocolate, churros, nachos, pizza, they are really not respecting the [policy] even when it’s outside of the scheduling times," says Medrano, who heads the Institute's healthy school food coalition.

L.A. Unified declined to provide someone for an interview. Spokeswoman Ellen Morgan did email a statement:

"The Los Angeles Unified School District provides principals all of the information and resources needed to have healthy fundraisers, but in a time when budgets are tight, they unfortunately may find ways to solve the problem of monetary needs by providing popular (not necessarily healthy) choices for students."

A stack of pizzas

At the end of a recent day at Stevenson Middle School on Indiana Street, kids stream out of classrooms into the quad.

Pizza boxes are stacked and ready for sale during an afternoon of parent-teacher conferences.

Fabiola Nunez buys four slices for her kids – the oldest is a sixth grader at Stevenson. She says the school often sells churros and sodas during other after-hours campus events. Nunez says she believes all of that hurts the district's efforts to encourage healthy eating.

Administrators at the middle school referred all questions to the district office.

Medrano believes food policies need to be consistent because they’re an important part of the fight against childhood obesity. In Los Angeles County, four out of 10 kids are considered overweight or obese.

On a recent Friday morning, Medrano meets with a classroom of moms at Dena Elementary School in Boyle Heights.

She explains what constitutes junk food, what parents need to know about fundraisers and encourages them to get to know school staff, especially the person in charge of the cafeteria.

While the moms look at pictures of meals - from hot pockets to spinach salad - to determine which ones are preferable, they try the healthy treats Medrano has brought – hummus and vegetables.

Some wonder why there's a huge poster advertising World's Finest Chocolate Sales on the front door of the school.

Dena Principal Jose Hernandez says the chocolate is sold off campus, so there is no rules violation. And he says the money supports a lot of things, including efforts to get kids to eat better.

"Whenever I see a student who is eating ... broccoli or salad, I’ll recognize them with eagle tickets," says Hernandez. "You get a chance at a raffle for little prizes and of course the chocolate sale pays for the prizes."

A little help from the feds?

Medrano says it's up to the school board, parents and activists such as her to find ways around the food rules exceptions and eventually close those gaps.

"We need to work and communicate and come up with creative ways to fundraise," she says.

For its part, the school district offers a suggested list of non-food alternatives for fundraisers, including magazines, holiday ornaments, cookbooks, music and temporary tattoos.

Medrano's also hoping for a little help from the federal government.

The USDA, which sets nutrition standards for schools, will be reviewing L.A. Unified's food policies this school year.