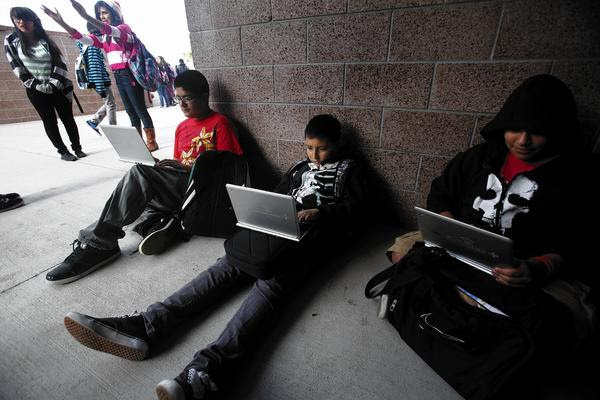 Perris middle school students Jacob Quinino, 13, left, Brian Guereque, 12, and Joshua Ortega, 12, use their Chromebooks during lunch break. The school district is paying about $344 for each device. ( Los Angeles Times)

January 4, 2014  ::  Even the noblest of efforts — such as, say, the Los Angeles Unified School District's program to give each of its 600,000-plus students Apple iPads — can suffer under the weight of bungled management. Since the district rolled out its $1 billion program — funded by construction bond money, a sticking point with letter writers — reader reaction has ranged from skepticism at the beginning to downright hostility as more problems were reported.

The Times' latest article on the program, which reported that other school districts pay far less than L.A. Unified for their laptops and tablets, sparked reader indignation again. This time, the targets were more numerous than just the district's administration; some faulted society for being hostile to paying for top-notch technology in the classroom, and others took issue with The Times' coverage.

"Thanks to The Times for exposing the great iPad travesty. I will certainly never vote for a school bond again if this is the way the money is wasted.

"As a parent of two elementary schoolchildren, I see little if any evidence that iPads can effectively replace textbooks. For example, my children actually prefer doing math with pencil and paper and dedicate their iPad time to mindless games.

"Smaller classes with textbooks and workbooks would be a far better use of bond money."

Leigh Clark of Granada Hills spots the profit-seeking elephant in the room:

"The front-page chart shows that LAUSD iPads cost more because they are the most current version. The newest technology, in a profit-centered economy, is the most expensive.

"What readers might miss is the 800-pound elephant in the room: No one wants to give free stuff to poor kids. Boring textbooks, maybe, but cool technology, no way. That would be, like, socialism."

"LAUSD is doing a wonderful thing by giving students the best technology available. 'You get what you pay for' is very true, especially for technology.

"Instead of celebrating this LAUSD endeavor, The Times has put the most negative spin possible onto the story."

Planaria Price of Los Angeles asks about all those teachers who lost their jobs:

"I didn't learn math from an iPad, so I might be missing something here.

"The cash-strapped LAUSD — which in 2012 cut libraries, nurses, thousands of teachers, administrators and support staff, and deprived 250,000 adult students of adult and career education — is spending more than $1 billion on one of the nation's most expensive technology programs.

"I would say that 'something is rotten in the state of Denmark,' but few would understand because the teaching of Shakespeare has also been cut."