ANNETTE BENING TO BECOME FACE OF ARTS ED FOR CALIFORNIA 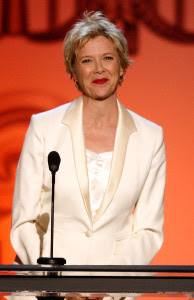 January 20th, 2014, 6:00am  ::  Actress Annette Bening has signed on as the new spokesperson for the California Arts Council's "keep art in schools fund."

The fund raises money for arts education through public donations on state tax returns - a move that was signed into law by Gov. Jerry Brown September 30.  The goal is to raise at least $250,000 - enough to keep the donation on tax forms. Arts donations were removed from tax forms after that minimum wasn't met in 2011.

From 2004-08, Bening served as a member of The California Arts Council, a government agency run by the state that helps to expand arts education, among other things.

The council said the details of the new fundraising campaign haven't been fully worked out, but expects Bening will appear in advertisements and promotional materials.

She joins prior celebs Jack Black, Eli Broad, Macy Gray and others who have helped the council. Those three participated in the California Arts Plate campaign, which raises money for public arts funding when people purchase specially designed license plates.

For details on how to donate, visit the California Arts Council's website.