November 1, 2011 |  6:19 pm - Non-teaching employees have ratified an agreement that restores well over 200 jobs at Los Angeles-area schools, but hundreds of others will remain without a job or will continue to work at reduced pay.

The agreement, announced Tuesday, settles for this year a contract dispute between the Los Angeles Unified School District and the California School Employees Assn., which represents such workers as office clerks, financial managers and library aides.

The deal means that every middle school will have at least one six-hour library aide. Middle schools also will have a full-time financial manager. More than 120 office clerks will return to work, about half of them in four-hour positions and the rest full time.

The restoration will be paid for with the $2 million that the district saved when each worker took four unpaid days off. The district also is kicking in $6 million that was part of a year-end surplus.

The Los Angeles Board of Education ratified the agreement in October. Employees should be back on the job by mid-November, said district spokesman Thomas Waldman.

Non-teaching employees have suffered thousands of layoffs over the last three years, most recently on Sept. 23 when 748 employees lost positions. In addition, 1,428 workers had their hours reduced or were reassigned to a different job or location, frequently with a reduction in pay.

In some cases, the remaining employees dealt with both challenges, such as library aides who suddenly were offered only three-hour-a-day jobs with no health benefits and often with lengthy commutes.

“Too many people, especially library aides, couldn’t afford to return to work … that caused them to use more in gasoline to get there,” said union field representative Connie Moreno.

Some but not all elementary schools are likely to have a library aide restored. Some schools had already elected to use discretionary funds to keep their library open at least part time.

Job losses and pay reductions haven’t been the only issue. The union also has challenged the legality of the district supplanting professionals -- who frequently must manage confidential documents -- with parent volunteers or part-time, low-wage teacher aides.

Still, both sides seemed relieved to get an agreement on partial restorations.

“I am very pleased that our members overwhelmingly approved” the pact, said union local President Espie Medellin in a joint statement.

“This agreement returns vital staff to many of our campuses,” said L.A. schools Supt. John Deasy. “I applaud CSEA and its members for taking this step. At a time of crippling budget cuts, restoring these positions is especially welcome news for principals, teachers, and parents.”

●● The numbers don’t add up. Maybe they’re intended to divide+conquer?

● “How do you “Restore” a job that wasn’t there? Many of the Financial Manager jobs didn’t exist before the RIFs.

● To say Elementary Librarian/Teacher Aides are ‘non-teaching’ jobs strains incredulity – this is bait-and-switch and/or Orwellian logic at it’s most tortured – or “spin” at its most dizzying. The District last year went through the charade of ‘not-for’ show trials challenging whether teacher-librarians teach …and lost.  Do we really want to go there again?

Make no mistake: Library Aide/Elementary Librarians - under the supervision of credentialed ‘Field Librarians” - teach. They teach children to use the library, to use computers, to use the internet, to do research, to think independently – to think outside the classroom.

● …except that all the Field Librarian jobs have been eliminated.

● Previously Middle School Libraries were staffed by credentialed Library Media Specialists (aka: Teacher-Librarians) , credentialed teachers with a specialty in library science. Now the District the superintendent proposes to replace them with Library Aides.  This is in violation of federal mandate, state law and the union contract.

….and good educational policy – which trumps the other three. 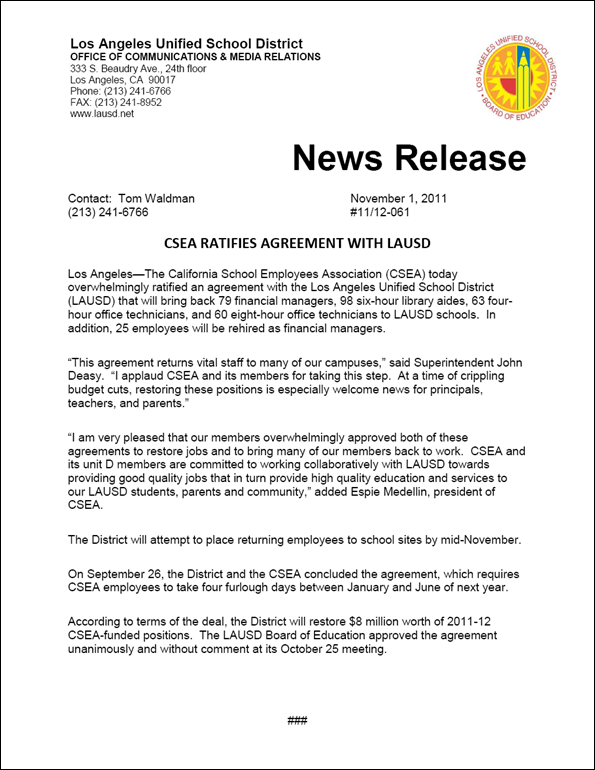 ●● Who decides which schools get their elementary librarians/library aides back – and on what basis?

●● Do the schools who made the commitment to their kids and literacy and used their own funds – either from discretionary budget funds or fundraising/bake sale money - get their money back?

●● Approximately 250 elementary librarians/library aides were RIFed – and 98 come back – yet more financial managers are being hired than were RIFed  …and that’s good news?

“At a time of crippling budget cuts, restoring these positions is especially welcome news for principals, teachers, and parents.”

Is that the trifecta of priorities? What about the kids?