Each Wasserman Foundation gift card will be worth $15. The catch is that recipients may only use the money on the charitable web site, DonorsChoose.org.

The site is full of L.A. Unified teachers’ requests for supplies — printers, dry erase boards, books and the like.

Of the total, $2 million will go toward the gift cards, another $2 million will match donations the school district’s lined up. Foundation officials say gift cards will not go to the families of L.A. Unified charter school students.

The foundation also announced a commitment for the next two years to match every dollar that is submitted on the www.DonorsChooseLA.org website to fund LAUSD public and charter school initiatives.

"I hope this project sparks tens of thousands of Angelenos to become micro-philanthropists by aiding critical teacher requests and creating a more robust learning environment for our kids," Wasserman said.

Monday, November 14, 2011 - LOS ANGELES (KABC) -- A new educational campaign allows parents to choose which of their children's classroom projects they'd like to fund.

The whole thing is made possible by a $4 million grant from the Wasserman Foundation. It will fund thousands of projects in various classrooms.

What makes the program so unique is how it's empowering parents to decide where the money is going.

Teachers will be able to post a list of various projects that they want in the classroom to the website DonorsChooseLA.org. The foundation will give away $15 gift cards to about 600,000 homes with a student enrolled at a Los Angeles Unified public or charter school. Parents can then use the gift cards to support the classroom projects of their choice.

"Parents (are) invited to think of themselves as education budget makers, and think about the kinds of resources they feel are most important for their kids to be successful," said Charles Best, founder and CEO of DonorsChoose.org.

It is a generous donation, especially for a school district plagued by financial hardship. The hope is that the donation will not only infuse money into the schools, but will boost parent involvement in their child's education.

"We see engaged parents as a necessary ingredient to kids getting a great education," said Best.

LAUSD Superintendent John Deasy says the program is unique to not only the area, but the nation.

"We are not aware of any other school district that's had the opportunity that we're about to launch here as a result of this unbelievably generous gift," said Deasy. "The opportunity for parents to be involved in this opportunity of philanthropy is totally new."

The donation will be given over the next two years.

And to get the community involved, beginning in January, Starbucks will also be handing out these gift cards to all customers within their Los Angeles locations.

LAUSD gets up to $4 million from Wasserman Foundation for music education, field trips, supplies and class projects

The foundation will give away $15 gift cards to about 600,000 homes with a student enrolled at a Los Angeles Unified public or charter school. Parents can use the gift cards to support projects posted on the website by teachers at their child's school.

The district's teachers have been encouraged to post two classroom projects on the site worth up to $800.

The Wasserman Foundation, which funds education, health and arts and culture initiatives in Los Angeles, will also give out gift cards -- totaling about $2 million -- to the general public at certain Los Angeles area Starbucks locations later this winter.

The foundation also announced a commitment for the next two years to match every dollar that is submitted on the www.DonorsChooseLA.org website to fund LAUSD public and charter school initiatives.

"I hope this project sparks tens of thousands of Angelenos to become micro-philanthropists by aiding critical teacher requests and creating a more robust learning environment for our kids," foundation President Casey Wasserman said. 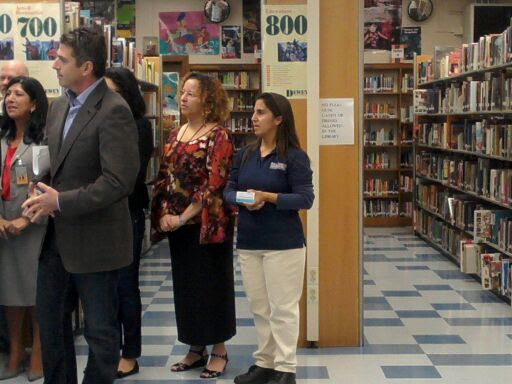 Monday, November 14, 2011 | 3:35 p.m. PST - Parents of the L.A. Unified School District will get a chance to participate in their children’s education with the assistance of a new funding initiative.

Mayor Antonio Villaraigosa and the Wasserman Foundation announced a $4 million grant to support Los Angeles School District and charter teachers. $2 million of the grant will be distributed through $15 gift cards to 600,000 LAUSD parents to apply to a classroom project of their choosing over the course of two years.

“Through the generosity of the Wasserman Foundation parents and teachers have an amazing opportunity to provide resources to cash-strapped classrooms.  At a time of continuing, massive budget cuts to public schools, this program gives a desperately-needed boost to our efforts to provide a quality education to all of our students,” Superintendent John Deasy said in a statement.

LAUSD teachers will receive additional funding for projects as the district undergoes a one year plan to cut spending. For the current school year the district expected a $408 million dollars deficit. Deasy outlined a plan to the Board of Education in April as steps aimed at saving $304 million next school year. The 12 furlough days it would require would likely save LAUSD $144 million. Other cuts included unpaid holidays, underfunding necessary district accounts, like workers' compensation, to realize another $60 million in savings.

"Every single [teacher goes] into their pockets to do something that, frankly, school districts and states [should] do, but because of thie commitment and dedication, they go into that pocket every single day. DonorChooseLA is a opportunity to join those teachers," Villaraigosa said.

Under the Wasserman Foundation grant, classroom projects will receive half of the requested funded amount from distributed gift cards while other philathopists must supply the remaining balance. Once the project reaches its funding goal, donors receive photos of the project taking place, a thank you letter from teacher and a cost report showing how each dollar was spent

Later this winter, customers who visit participating Starbucks locations will receive a DonorsChooseLA.org gift card, enabling them to become education micro-philanthropists and engage with their public schools in a simple, accountable and personal way. 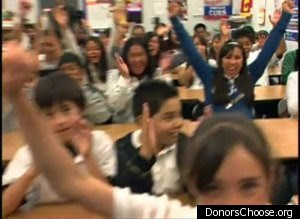 Starting this month, all LAUSD parents will receive a $15 DonorsChooseLA.org gift card and, starting January 1, all Los Angeles Starbucks customers will receive a $10 gift card. The gift card will allow them to support any of the requested projects, from easels to protractors to field trips. Once a project reaches its funding goal, DonorsChoose.org delivers the materials, and the parent or Starbucks customer gets photos, a thank-you letter from the teacher and a report showing how each dollar was spent.

DonorChoose.org's press release states that this program will make thousands of Angelenos "education micro-philanthropists and engage with their public schools in a simple, accountable and personal way."

Teachers in Los Angeles and across the country have posted wish-list projects to DonorsChoose.org since 2008, when the nonprofit was founded. But, as LAUSD Superintendent John Deasy told the Huffington Post, this is the first time parents will be given funds to choose the project they like best. "This is extraordinary. It's the single largest gift to DonorsChoose for a single city," said Deasy.

Deasy shared that teachers who already use DonorsChoose.org are excited about the grant, and he hopes it will encourage more to sign up to the site. He also praised the process, saying, "the way this is being funded is so thoughtful, getting funding through involvement throughout the city, especially from our parents."

As DonorsChoose.org's video above explains, the inspiration for the nonprofit came to founder, Charles Best, when he was a teacher at a Bronx high school. "My colleagues and I were talking about books that we wanted our students to read, field trips we wanted to take them on, art supplies that we needed. But these ideas wouldn't go past the lunch room." He continued, "then I just figured that there were people from all walks of life who wanted to help improve our public schools."

Coming at a time of increasingly loud parent frustration at under-performing LAUSD schools, this two-year program puts decision-making power, at least $10-15 of it, directly into the hands of parents. From DonorsChooseLA.org, it is possible to search for a particular school, subject or keyword (i.e. - "frog dissection") among the hundreds of teacher wish-list projects posted so far.