"The results were stunning. There's no other word to use," said Patricia Moss, academic dean at the Rhode Island boarding school where the study was done. "We didn't think we'd get that much bang for the buck."

The results appear in July's Archives of Pediatrics & Adolescent Medicine. The results mirror those at a few schools that have delayed starting times more than half an hour.

Researchers say there's a reason why even 30 minutes can make a big difference. Teens tend to be in their deepest sleep around dawn — when they typically need to arise for school. Interrupting that sleep can leave them groggy, especially since they also tend to have trouble falling asleep before 11 p.m.

"There's biological science to this that I think provides compelling evidence as to why this makes sense," said Brown University sleep researcher Dr. Judith Owens, the study's lead author and a pediatrician at Hasbro Children's Hospital in Providence, R.I.

An Archives editorial said the study adds to "a growing body of evidence that changing the start time for high schools is good for adolescents."

The fact that the study was in the exclusive setting of St. George's School in Middletown, R.I., doesn't necessarily weaken the results. Owens acknowledged that there might be more hurdles to overcome at poorer, public schools, including busing schedules, parents' work hours and daycare for younger siblings. While these issues have killed many proposals elsewhere, some public high schools including those in Minneapolis and West Des Moines have adopted later starting times.

Mel Riddile, an associate director at the National Association of Secondary School Principals, favors later class times for teens but said most districts oppose it.

"It's about adult convenience, it's not about learning," he said. "With budget cuts, it's going to make it more difficult to get this done."

Many parents and teachers at St. George's were opposed but reluctantly agreed to the study after a presentation by Owens, whose daughter was a junior there.

Overall, 201 high school students completed sleep habit surveys before and after the nine-week experiment last year. The results were so impressive that the school made the change permanent, Moss said.

Starting times were shifted from 8 to 8:30. All class times were cut 5 to 10 minutes to avoid a longer school day that would interfere with after-school activities. Moss said improvements in student alertness made up for that lost instruction time.

The portion of students reporting at least eight hours of sleep on school nights jumped from about 16 percent to almost 55 percent. Reports of daytime sleepiness dropped substantially, from 49 percent to 20 percent.

"It was a positive thing for the entire school," he said.

The study was designed to look at changes in sleep habits and behavior and didn't examine academic performance. It also lacked a control group of students who didn't experience a change in school start times — another limitation. Still, the researchers said the results show delaying school starting times is worthwhile.

A short delay in school start time appears to be associated with significant improvements in adolescent alertness, mood and health, according to a report in the July issue of Archives of Pediatrics & Adolescent Medicine, one of the JAMA/Archives journals.

"Beginning at the onset of puberty, adolescents develop as much as a two-hour sleep-wake phase delay (later sleep onset and wake times) relative to sleep-wake cycles in middle childhood," the authors write as background to the study. The study also notes that, "adolescent sleep needs do not decrease dramatically, and optimal sleep amounts remain about nine to 9 1/4 hours per night."

Judith A. Owens, M.D., M.P.H., of the Hasbro Children's Hospital, Providence, and colleagues, studied 201 students in grades 9 through 12 attending an independent high school in Rhode Island. For the purposes of the study, class start time was delayed 30 minutes, from 8 a.m. to 8:30 a.m. Additionally, students were required to complete the online retrospective Sleep Habits Survey before and after the change in school start time.

According to the study, after the delayed start time, "students reported significantly more satisfaction with sleep and experienced improved motivation. Daytime sleepiness, fatigue and depressed mood were all reduced. Most health-related variables, including Health Center visits for fatigue-related complaints, and class attendance also improved." The later start was also associated with a significant increase in sleep duration on school nights of 45 minutes as well as a reduction in weekend oversleep (the difference between school day and non-school day wake times).

The percentage of students getting less than seven hours of sleep decreased by 79.4 percent, and those reporting at least eight hours of sleep increased from 16.4 percent to 54.7 percent. Additionally, the percentage of students rating themselves as at least somewhat unhappy or depressed decreased significantly (from 65.8 percent to 45.1 percent), as well as the percentage who felt annoyed or irritated throughout the day (from 84 percent to 62.6 percent). In terms of health consequences, significantly more students self-reported visiting the Health Center for fatigue-related symptoms before the delayed start time (15.3 percent versus 4.6 percent).

The study also found that after the delayed start, "students rated themselves as less depressed and more motivated to participate in a variety of activities and were less likely to seek medical attention for fatigue-related concerns in conjunction with the change in start times." Additionally, "despite the initial considerable resistance voiced by the faculty and athletic coaches to instituting the start time delay and the original intentions of the school administration to return to the 8 a.m. start time after the trial period, students and faculty overwhelmingly voted to retain the 8:30 a.m. start for the spring term."

"Given that Owens et al report similar findings to the earliest research, there is a growing body of evidence that changing start time for high schools is good for adolescents. So, the follow-up question is: 'Why aren't more schools changing to a later time?'" writes Kyla Wahlstrom, Ph.D., of the University of Minnesota, St. Paul, in an accompanying editorial. "The answer to that is actually very complicated…The time that a school starts is felt to be sacrosanct by those who have come to rely on it as a predictable part of their day and life."

"The role of data and factual information in discussing and advocating for changing school start times is key…when the first findings emerged in 1997, the question remaining at that time concerned the effect of the later start time on academic outcomes. Longitudinal research has since found several significant academic effects, such as decreasing the dropout rate, but a direct correlation between later start time and academic achievement on normed tests has not been substantiated."

"In the end, having comprehensive information and impartial presentation of what is known, and not assumed, is needed to really begin the local dialogue," Dr. Wahlstrom concludes. "The community at large is, after all, the final arbiter, as all must truly live with the consequences. Our teenagers need and deserve our best informed thinking about all of this; having the facts in hand is the best place to start."

From the Archives of Pediatric Medicine

July 2010 - Sleep affects how you think, how you feel, and how healthy you are. Adolescents need as much sleep each night as they did when they were children, but many adolescents do not get enough sleep. An ideal amount of sleep for an adolescent is about 9 hours each night. 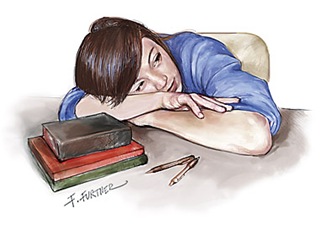 About the time that puberty starts, adolescents develop a 2-hour sleep-wake "phase delay." This means that if your child usually went to bed at 8 PM and woke up at 6 AM, then during adolescence he or she may feel more awake in the evening so that he or she does not feel like he or she has to go to bed until around 10 PM. Since most adolescents still have to get up early each morning for school, this delay in bedtime may lead to your adolescent getting less sleep each night than he or she did as a child.

Homework, sports, extracurricular activities, and part-time jobs can all lead to decreased sleep for adolescents since they may cause adolescents to stay up even later at night to get everything done.

LESS SLEEP CAN LEAD TO HEALTH AND SCHOOL PROBLEMS

Large numbers of research studies of adolescent sleep have shown that typical adolescents are chronically not getting enough sleep and tired in a way that impacts their health.

Health problems from chronically not getting enough sleep include changes in mood, attention, memory, behavior control, and enjoyment of life. Lack of sleep is also likely to impact how adolescents learn and may lead to lower grades in school. Other health concerns resulting from being tired include:

One way in which sleep schedules may be changed to help adolescents get more sleep is by allowing more opportunities to sleep later into the morning. A study in this month's Archives looked at changing a school start time from 8 AM to 8:30 AM; this change led to adolescents reporting more satisfaction with sleep, improved motivation, and better class attendance. This change also resulted in adolescents reporting decreased sleepiness, tiredness, and depressed mood.

HOW CAN YOU HELP YOUR ADOLESCENT GET BETTER SLEEP?

Adolescent sleep has been a very popular subject lately. People are questioning the fact that it may be true that their teenage sons and daughters may need ...
www.stanford.edu/~dement/adolescent.html - 9 hours ago - Cached - Similar

2. Teen sleep: Why is your teen so tired? - MayoClinic.com

Teens need more sleep as they go through adolescence. Even with more than 9 hours of sleep a night many teens struggle with drowsiness, especially early in ...
www.sleepdex.org/adolescent.htm - Cached - Similar