JUDGE WEIGHS IN ON ESTABLISHMENT OF TWO PILOT SCHOOLS 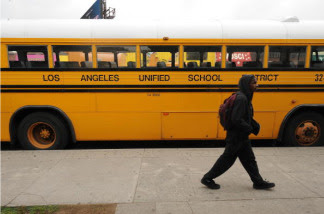 Los Angeles Superior Court Judge Robert O'Brien did not say when he would rule on the motion by United Teachers Los Angeles for a preliminary injunction.

If ranted, the order would enjoin the LAUSD from going forward with plans to establish pilot schools at Lincoln High School and San Fernando Middle School until a trial is held on UTLA's claim that the changes require approval of the teachers as well as members of the Pilot Schools Steering Committee.

Pilot schools are part of educational reform efforts in the LAUSD. They offer additional control over school resources in exchange for increased accountability by the staff.

UTLA filed its petition against the LAUSD on June 23. The union maintains that under its agreement with the district, a vote of the teachers and steering committee approval are conditions to establishing pilot schools.

Although the steering committee granted provisional approval for the pilot school at San Fernando Middle School for one year, the panel postponed the decision for Lincoln High until January 2011, according to UTLA.

The district did not allow the teachers to vote at either school, UTLA officials say.

Union officials say they support the idea of pilot schools and were in fact instrumental in the negotiation of the agreement with LAUSD to create more such campuses. However, they say they want to hold the LAUSD to their agreement have the conversions contingent on the outcome of a vote by teachers.

LAUSD lawyers say UTLA is using the wrong legal approach to accomplish its objective and that the petition should be dismissed.