LOW-ACHIEVING FREMONT HIGH REOPENS; MOST OF ITS TEACHERS ARE NEW + a message from Mónica + smf’s 2¢ [updated]

The L.A. Unified campus reopens with a mostly new staff as the district attempts to address the campus' historically dismal academic results. But the approach has its critics.

Signs and banners welcome students at Fremont High as the school reopened with a largely new staff and a program makeover. It's the first Los Angeles Unified high school to be reconstituted because of poor academic performance. (Al Seib / Los Angeles Times / July 6, 2010)

July 7, 2010 - A revamped Fremont High, which opened its school year Tuesday with a majority of new teachers, has become a local test case for a controversial school makeover approach being tried around the country.

Last December, Los Angeles schools Supt. Ramon C. Cortines announced that he would personally oversee sweeping reforms at Fremont. The most striking was his edict that all staff members — including teachers, counselors, custodians and cafeteria workers — had to reapply for their jobs at the persistently low-performing South Los Angeles campus.

Among the disturbing data that led to his decision: Fewer than 2% of students tested as proficient in the math course they took last year.

Nearly half of the teaching staff has returned, said Principal Rafael Balderas. Of those not coming back, about 70% had refused to interview for their former jobs. The rest, about 33, tried to come back but were turned down. Displaced teachers are entitled to jobs at other schools in the Los Angeles Unified School District.

Balderas said he retained many of the "best and the brightest" and was able to fill slots as needed with equally talented educators from among 600 applicants.

The Obama administration, in its initiative to "turn around" the worst schools in the country, has endorsed replacing a school's staff, among other harsh strategies, but acclaim is far from universal.

If anything, Cortines should have gone farther, said Tom Vander Ark, who headed the education division of the Bill & Melinda Gates Foundation and currently runs a company that assists with school start-ups.

"Close and replace is the best option," he said. "There's only one thing wrong with the large, struggling high schools of Los Angeles — and that's everything."

Mayor Antonio Villaraigosa pressured Cortines and the school board this month to shut down many more schools and reopen them with new staffs or as independently run charter schools.

But education historian Diane Ravitch, an advisor to Cortines when he headed New York's schools, called the approach wrongheaded.

"There is zero support in research or practice for this mindless, punitive scheme to demean teachers," said Ravitch. "Improve schools. Don't fire teachers without individual evaluations."

L.A. teachers union officials said that the district mismanaged Fremont as it went through eight administrators in 12 years, and that genuine efforts by teachers to improve the school were unsupported and finally discarded.

Former Fremont teachers also point to small gains in test scores and graduation rates. In an earlier reform, they note, the school was divided into 12 academies, some of which outperformed the school as a whole. That success, they said, could have been built upon.

Most of the teachers in one such academy, the Humanitas program, have left, including lead teacher Stephen DeMarco, whose absence was mourned by students waiting outside for school to start. (Tuesday was the official first day of the school year because the 4,500-student campus operates on a year-round schedule.)

"The Humanitas teachers supported us," said senior Alex Giron. "Now that we're seniors, we need them more than ever."

Because of budget cuts and seniority rules, Fremont had to fill the vast majority of vacancies with teachers displaced from other district schools. French teacher Marianne Gomis said she came to Fremont even though she would have preferred to stay at her smaller, higher-performing school but is grateful to have a job.

New York City is cited frequently for the success of its restructured schools, but Ravitch and others have noted that the new schools frequently had built-in advantages, such as smaller classes and fewer disabled students and English learners.

The graduation rate at restructured schools was 51.3%, compared with a rate of 44.4% among similar students elsewhere, said W. David Stevens, senior research analyst with the Consortium on Chicago School Research at the University of Chicago. But test scores — the ultimate basis for the moves at Fremont — were indistinguishable from other schools'.

A closer look reveals examples of both failure and progress, Stevens said. Successful turnarounds stood out for their inspired administrators, teacher involvement, emotional and academic support of students, and strong community relationships.

The possibility of a new Fremont that could far surpass the old was enough to bring back health teacher Jake Sanchez, who started the day with a pep talk to a room of freshmen decked out in the newly required uniforms.

"You can go this way or that way," he said, comparing dropping out and graduating. The best a dropout can hope to earn is "$10 an hour for your back .... You can make a lot of money with your brain."

Fremont, he said later, "lost a lot of good, experienced, strong teachers. But this isn't a personal thing. It's about these kids getting an adequate education. I don't think it was happening quick enough."

The Los Angeles Unified School District followed through today on its pledge to make big changes at one of its lowest performing schools. ...

Employing a controversial reform model never used at a Los Angeles Unified school, all staff members at the 4500-student campus – except the newly appointed ... 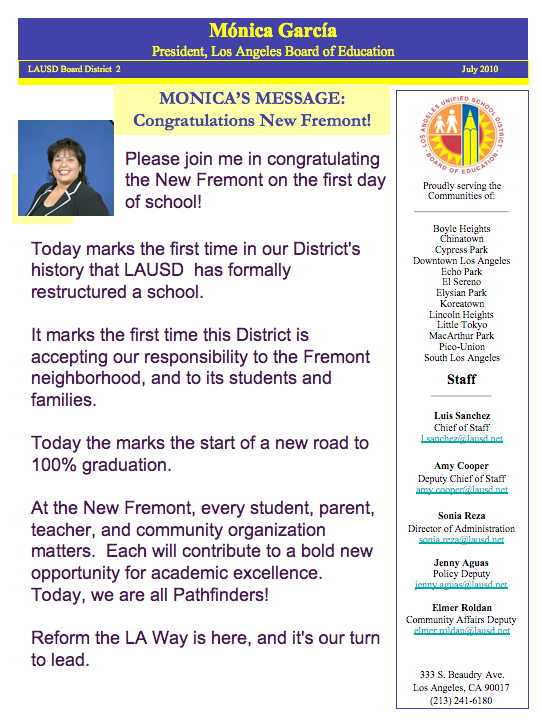 ●●smf’s 2¢: If Reform the LA Way is taking “Low-Achieving Fremont High” and restructuring it by laying off 52% of the staff and repackaging it as “The New Fremont” – while still leaving the school on the-Three-Track/Fast-Track-to-Failure Year Round Calendar I fear we are being served up something akin to “New Coke”.

Reformulated Reconstituted Restructured Fremont was announced last December at a press event for Arne Duncan, served up as  a  present for the Secretary of Ed in No Child Left Behind holiday gift wrap.

And if, as Monica claims: ‘At the New Fremont every student, parent teacher and community organization matters’ …they certainly didn’t matter and weren’t involved in the restructuring or decision making process .

We have more flavors of school reform in LA than they have at Baskin-Robbins. Charter schools; dependant, independent; stand-alone and CMO run. Partnership schools. Pilot schools. I-design schools. Public School Choice schools. Thin contract and Fat contract. Small Learning Communities and Small Schools. We have Green Dot @ Locke – which is none-and-all of the above. Now Reconstituted/Restructured schools. Other than Magnet Schools and Schools for Advanced Study is there any evidence of success?