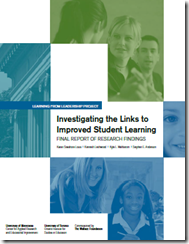 July 23, 2010 -- An expansive study devoted to examining the traits of effective school principals has found that high student achievement is linked to “collective leadership”: the combined influence of educators, parents, and others on school decisions.

Effective principals encourage others to join in the decision-making process in their schools, said the study, which was commissioned by the New York-based Wallace Foundation and produced by the University of Minnesota’s Center for Applied Research and Educational Improvement, in St. Paul, and the Ontario Institute for Studies in Education at the University of Toronto.

Successfully done, the study suggested, such power sharing does not mean a principal loses clout.

“Influence in schools is not a fixed sum or a zero-sum game,” the report said. (The Wallace Foundation underwrites coverage of leadership, human capital development, expanded learning, and other topics, in Education Week.)

The long-awaited study, published this week, is the largest to date to focus on the principalship, its authors say. It attempts to get beyond the broad statement that school leadership is important and digs into just what types of leadership appear to make the most difference when it comes to improving schools. In order to answer that question, the foundation devoted $3.5 million and six years to surveying more than 8,400 teachers and 470 school administrators. Additional interviews were conducted with more than 1,000 educators at the school, district, and state levels. In addition, researchers observed 310 classrooms. The study also tied the data to student test scores in mathematics and English.

Edward Pauly, the director of research and evaluation for the Wallace Foundation, said that when the study was commissioned in 2003, few people understood the importance and key activities of effective school leaders.

“Some research had been done, but the studies were small, fragmentary, and they did not connect to student achievement and were not relevant to school improvement efforts,” Mr. Pauly said. A lot of attention was paid to teacher effectiveness.

This study “makes it completely plain all of these school improvement efforts have to have a focus on the leadership of the school,” he said. “You just can’t get away from that.”

Principals and teachers who were surveyed agreed on the role that principals play as instructional leaders. But that doesn’t mean that principals must be the ones directly demonstrating educational techniques to teachers, said Kyla L. Wahlstrom, the director of the University of Minnesota’s educational research center and the lead author of the report. Successful principals “were setting the conditions that enabled the teachers to be better instructors,” she said.

“It is not the case that the principal is the only person who can lead a school to higher achievement,” Mr. Pauly said. “If nobody in a school, or few people in a school, see it as their priority, then that school has a big problem.”

The study also noted how important it is for principals to stay in one school in order to build those effective partnerships among teachers and parents. Some district policies intentionally rotate principals into new buildings every three to five years out of a belief that frequent moves eliminate complacency, Ms. Wahlstrom said. “To move them around just to move them around is probably not a good idea,” she said. By the same token, district leaders should think carefully before moving “star” principals into struggling schools—a strategy also emphasized in the U.S. Department of Education’s initiative for turning around failing schools—because the schools left behind may have problems.

Data Use a Challenge

The study also said that “data-driven decision-making” was a buzzword, but that relatively few of the people interviewed could describe a situation in which they had a discussion based on data that was then used to make a good decision. “Most people had very few examples of where they used data well,” Ms. Wahlstrom said.

However, the most effective principals were the ones who were able to use data and show teachers how to use the information, too. The study said principals “can play a key role in establishing the purposes and expectations for data use. They can provide structured opportunities (collegial groups and time for data use), sessions for data-use training and assistance, access to expertise, and follow-up actions. Where principals do not make data use a priority—where they do not mobilize expertise to support data use and create working conditions to facilitate data use in instructional decision making—teachers are not likely to do it on their own.”

Daniel A. Domenech, the executive director of the American Association of School Administrators in Arlington, Va., said that the study reinforces many of the priorities of his organization. “We’ve known for a long time that stability in leadership is important. We see it at the highest level. Districts that have a revolving door for the superintendent tend to be dysfunctional districts. The same thing is true at the building level,” he said.

He also said he appreciated the study’s promotion of collective leadership among principals, teachers, and parents. “In the best performing districts, all of those elements have a voice in the decision making process,” he said.

“Principals, to their credit, are finding ways to access resources,” she said.

Mr. Pauly, from the Wallace Foundation, said that the results of the study bring up new issues for the organization while reinforcing existing priorities. The study noted that principals turn over at schools every three to four years, which has a “moderately negative” effect on school culture. “The topic of principal turnover was not on Wallace’s radar,” Mr. Pauly said. But “based on this study, this has to be on the top of the list for everybody.” The study’s demonstration of the importance of principal development reinforces work that the foundation has been doing already, Mr. Pauly said.