THE ABCs OF WASTEFUL SPENDING + smf's 2¢ …and a bit of the record, resurrected.

Editorial From the L.A. Daily News

Art installations and marble memorial walls? Or a few trees so it's actually cool enough for kids to play outside?

The sensible answers are pretty obvious, right? Not to the Los Angeles Unified School District, which chose to spend $572 million to build elaborate - no, lavish - schools out of the former Ambassador Hotel on Wilshire Boulevard. Artificial turf soccer fields, historic replica spaces and public art sculptures helped push the per-student cost of the Robert F. Kennedy Community Schools to $135,000, nearly 40 percent higher than the average school built in the central Los Angeles area over the past two years.

When the completed campus opens this fall, students will be met by a shocking incongruity. They'll enter the most expensive school ever built by the LAUSD and find fewer teachers, older textbooks, larger classes and a shorter school year.

Yes, school construction is paid from one pot of voter-approved bond funds and school operations are paid from another pot of state budgeted funding, so the district isn't laying off teachers to pay for the expensive school. But, the district is still playing with precious taxpayer dollars. LAUSD has sought bond after bond to pay for school construction, even as enrollment was decreasing, and for big-ticket items, such as the RFK schools and the $230 million performing arts schools downtown. Meanwhile, older schools could use some rehab.

There's nothing wrong with spending money to build nice schools. These facilities become homes away from home for children from the time they enter kindergarten at age 5 until they graduate at 18. Having a bright, clean, inspired environment helps instill a sense of pride and enthusiasm in their school and, by extension, their education. Who wants to spend eight hours a day in a dump?

There is also value in historic preservation. Los Angeles has a sad track record of demolishing landmarks, and the school district has done an admirable job of recreating elements of the Ambassador Hotel, which was a center of historic Hollywood nightlife and was the site of Robert F. Kennedy's assassination in 1968. The fight over historic preservation unfortunately added to the expense of the school.

But somehow good intentions spun out of control. Nobody questioned how much is too much to spend on a school construction project. And nobody seemed to recall that previous LAUSD board members had pledged to find private funds to pay for the pricey additions of a park, soccer fields (for which groups will have to pay fees to use), art installations and the aforementioned talking benches that commemorate the historical significance of the Ambassador Hotel.

Worse, district leaders don't seem particularly bothered by this outlandish price tag. Their comments seem to imply that building lavish, expensive schools in traditionally underserved communities makes up for decades of neglect. It does not. Nor do swanky amenities provide what students so desperately need: Quality teachers, smaller classes and high expectations, to name a few.

●● smf's 2¢: For the most part the Daily News editorialist has it right. The rightest part is here: "school construction is paid from one pot of voter-approved bond funds and school operations are paid from another pot of state budgeted funding…"

That states the situation as succinctly as can be:

The  infamous "Talking Benches" are a project of LA City Parks and Recreation; the current school board's relationship with City Hall begs the question of LAUSD approval and review of these expenses. The board's response that "we didn't know" rings hollow: Who did know? Who didn't tell them? Shouldn't this have come up for review at the Facilities Committee?*

Who, gentle readers, was watching the store?

In the twenty plus year history of LAUSD's litigation and purchase of the Ambassador Hotel site (it was Project #1 on the construction list – predating the Belmont Learning Center/Vista Hermosa/Roybal HS project)  the legal and political fight over purchasing the school, demolition v. adaptive reuse, issues of historic preservation. the site's situation in the Wilshire corridor and the timing of construction at the top of the market have all contributed to the school's continuously escalating cost.

Dating back to 1989 when LAUSD first identified the site for a school -- to completion this year -- the school has been planned, designed, redesigned and reconfigured dozens of times. Each design change, whether to conform to the political dynamic, the demographic projection or alignment with this week's model of educataional reform – K-12, small schools, pilot schools, partnership schools, charter schools, etc.  - has been costly and time consuming. Not only does Time = Money; Money = Money!

* I'm sorry, I forgot. There no longer is a Facilities Committee! 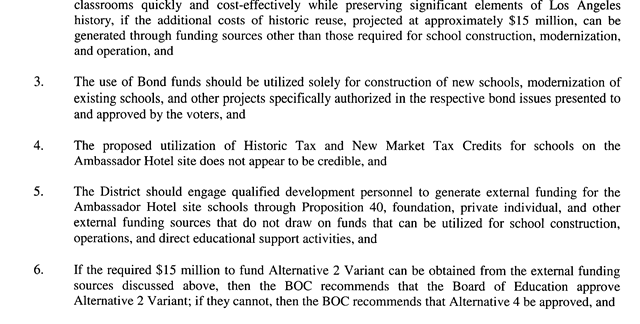