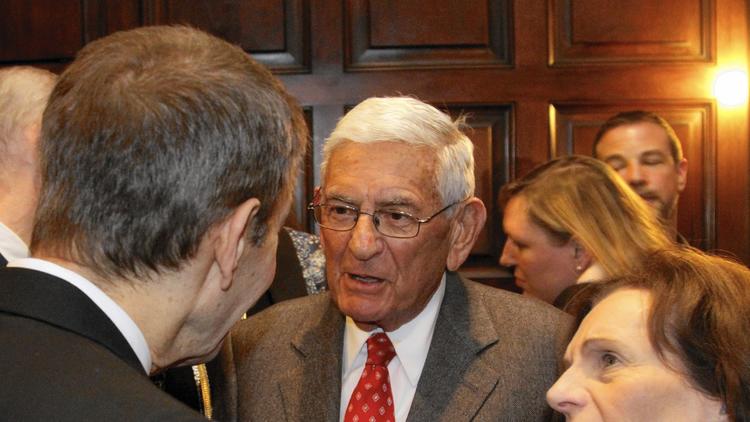 A $50,000 donation by Eli Broad to a charter school PAC was among those disclosed after the L.A. school board election. Pictured are Broad and his wife, Edythe. (Lawrence K. Ho / Los Angeles Times)

Dec 1, 2015 | 6:24pm  ::  Nearly $2.3 million in donations made by charter school supporters during this year's Los Angeles school board races were shielded from disclosure until after the election was over, a review of records shows.

Those contributions — from philanthropist Eli Broad, heirs to the Wal-Mart fortune, former New York City Mayor Michael R. Bloomberg and others — were made prior to the May 19 election to California Charter Schools Assn. Advocates, a political action committee in Sacramento. That group then forwarded campaign funds to a local affiliated committee.

The Los Angeles-based PAC was required by campaign laws only to identify the state charter group as the source of the funding, not the individual donors.

As a result, the donors remained anonymous in Los Angeles campaign filings. In September, the state charter group filed a required state report listing all its contributors.

While the practice appears to be within the law, state campaign regulators said they are concerned about how the contributions remained unreported for so long.

Jay Wierenga, a spokesman for the California state Fair Political Practices Commission, said the goal of state law is "to elicit and promote meaningful disclosure to the public when it counts — before an election."

A state charter association spokesman said the group did nothing wrong in the way it handled the contributions. He emphasized that the group's objective is to improve education opportunities for families.

The donors "see the value in our goals and mission to provide a high-quality educational option to parents and students," said Richard Garcia, director of elections communications for the California Charter Schools Assn.

Garcia noted that charter advocates lack the extensive financial base of dues-paying members that unions can rely on. The L.A. teachers union was the main force opposing charter-backed candidates in school board elections that are widely recognized as the costliest in the nation.

Charters are independently managed, publicly funded schools that are exempt from some rules that govern traditional campuses. Most are nonunion.

Earlier this year, The Times asked the charter group for a list of donations made in 2015 in advance of the election. The group declined. But Garcia said in a recent interview that it was not trying to hide anything in setting up the local PAC to receive money from the state PAC.

"Local committees are established across the state to give a local flavor to each race, including [a] local name on disclaimers for campaign materials," he said. "This is a common practice as campaign consultants believe it best to maintain local name ID."

Voters following the election in Los Angeles knew only that the money flowing into the campaign during 2015 came from the state charter PAC.

While the names of the donors were absent from L.A. records, some did appear in campaign reporting documents related to a state Senate race in the San Francisco Bay Area. In that contest, the state charter group had not created a local PAC to channel the funding through. As a result, some contributors were revealed.

The name the charter group gave its Los Angeles PAC was Parent Teacher Alliance in Support of Rodriguez, Galatzan, and Vladovic for School Board 2015. Incumbent Tamar Galatzan lost despite charter support, while Richard Vladovic, who was supported by unions and charters, was reelected.

The charter PAC was the biggest money player in these contests, spending about $2.7 million. The teachers union spent about $1.6 million, according to state and local records.

Among the charter donors not disclosed in L.A. filings was Bloomberg, who gave $350,000 in 2015. Bloomberg already had contributed $250,000 in 2014, an amount that was disclosed prior to the election because the funds arrived before the end of 2014.

Other donors from 2015 who were disclosed after the election included:

• Emerson Collective ($150,000), a corporation under the control of Laurene Powell Jobs, the widow of Apple founder Steve Jobs, which supports charitable and political causes. 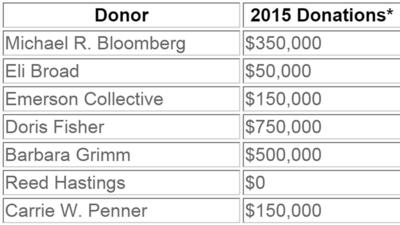 Broad contributed to the state charter PAC not to delay disclosure but "because he supported the organization's statewide election strategy," said Karen Denne, chief communications officer for the Eli and Edythe Broad Foundation.

Recently, the Broad Foundation spearheaded a proposal to enroll half of Los Angeles students in charters over the next eight years. Potential funders listed in a confidential June draft, obtained by The Times, included key donors to the charter PAC or the affiliated state charter association, which is a nonprofit.

The issue of so-called "dark money" has touched Broad and the Fisher family before. In the 2012 election, the Fishers gave $9 million and Broad, $1 million, to groups that concealed the sources of these donations. The money was used to oppose a tax increase to fund education and in support of a ballot measure to limit union participation in political campaigns. The tax increase passed, the anti-union measure failed and the dark money maneuvering led to fines for some of the participants, although not the donors.

Under election law, donors cannot direct a PAC to spend money in a particular election, and the charter group said it followed these rules. About three-quarters of its reported 2015 spending was in the L.A. board races. Nearly all the rest went to the Bay Area state Senate race.

Garcia likened the charter group's donations to funding that the local teachers union received from the California Teachers Assn. and the American Federation of Teachers.

Donations from those unions and others were disclosed prior to the election. Combined, the PACs from four statewide and national teachers unions provided $390,000, according to records filed with the L.A. Ethics Commission. The union also assembled its war chest through a $400,000 loan from the union's strike fund and $40,900 a month that is collected from voluntary contributions to the United Teachers Los Angeles PAC, which is called Political Action Council of Educators, the union said.

"In UTLA's case, many members voluntarily give $8.33 per month to our PAC," union President Alex Caputo-Pearl said.

As in this year's elections, the mega-donors have not always carried the day. In the 2013 elections, candidates backed by wealthy donors lost two of three contests, including one in which incumbent Steve Zimmer prevailed. He used the identity of the donors as an effective counterpunch to their resources.

"They're truly funded by and accountable to the 1%," Zimmer said of the charter advocacy group.

But that issue was not the linchpin of this year's election. The two defeated incumbents were successfully targeted for being in office during L.A. Unified's failed and costly effort to provide every student, teacher and campus administrator with an iPad. The charter group spent its money to use the iPad debacle against incumbent Bennett Kayser, who lost to Rodriguez. The teachers union used its dollars to do the same to Galatzan, who lost to challenger Scott Schmerelson.

Recent U.S. Supreme Court decisions have presumed that voters would have full knowledge of who was contributing to campaigns when it struck down many limits on the amount of donations, said Jessica Levinson, a Loyola Law School professor who specializes in election law and heads the L.A. City Ethics Commission.

"The purposes of the disclosure laws are to give the public information, which is much more useful the faster it comes," said Levinson. "The concern is that you can use an intermediary and, essentially, legally mask who is behind a donation."