L.A. SCHOOL BOARD TO HOLD SECOND ROUND OF INTERVIEWS FOR SUPERINTENDENT 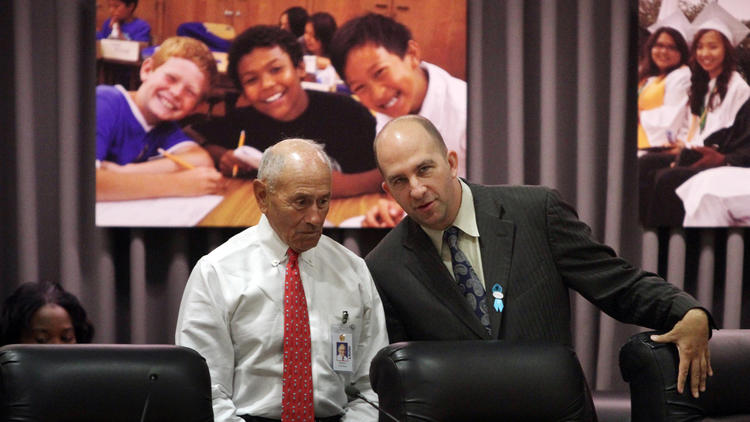 L.A. schools Supt. Ramon C. Cortines, left, confers with school board president Steve Zimmer at district headquarters. The board on Sunday interviewed one or more candidates to replace Cortines, who wants to retire at the end of the year. (Bob Chamberlin / Los Angeles Times)

Dec 7, 2015  9:17PM  ::  The Los Angeles Board of Education on Tuesday will begin its second interview session with candidates seeking the job of superintendent for the nation’s second-largest school system.

The closed-door meeting is scheduled to begin at 8 a.m. And board members also could conduct interviews — or a discussion about the potential leader — at the end of the day, after two unrelated meetings are held to handle other business.

“The board is approaching this with both the intensity and the focus that a decision that stands to affect so many children mandates,” board President Steve Zimmer said Sunday.

The first interview session took place Sunday, and if it is any guide, the public will learn little from these meetings until the board makes its choice.

Except for brief periods to open and close the meeting, the entire gathering took place out of public view, and no announcement was made at the conclusion.

About seven candidates initially are being considered from a pool of more than 100 brought forward by a search firm; their names have not been released.

Besides taking place Sunday, the most unusual aspect of the first meeting was that, after beginning in open session for one minute, board members then moved to the 63rd floor of the U.S. Bank Tower to conduct interviews.

Zimmer declined to say why the closed session moved to another location. But observers speculated that the purpose was to frustrate any effort to spot applicants on their way in or out of district headquarters, which is practically deserted over the weekend.

After meeting for eight hours in private, board members returned to headquarters, reconvened in open session and adjourned. Board members also have set aside time next Sunday and on several other days this month.

The board is seeking a replacement for current Supt. Ramon C. Cortines, 83, who plans to retire at the end of the year. Cortines has headed the L.A. Unified School District three times — most recently when he agreed to replace John Deasy, who resigned under pressure in October 2014.

Tuesday is expected to be the last regular board meeting headed by Cortines; he has said as much, whether the district has a replacement ready or not.

The first phase of the search process, in October, involved gathering public input. Next, board members reviewed that feedback, added their own observations and created a “leadership profile” for the next superintendent.

The names of candidates are being kept confidential to encourage a wider pool of applicants. Some prospects, currently in other jobs, would not apply if word of their interest became public, the search firm has told the board.

L.A. Unified is the nation’s largest school system run by an elected Board of Education, and it faces enormous challenges, including a potential budget deficit, shrinking enrollment and an outside effort to rapidly increase the number of charter schools, which could threaten the district’s financial solvency and its ability to provide services to students.

Charters are independently managed and free from some rules that govern traditional campuses. Most are nonunion.

The agenda for Tuesday’s meeting includes renewal petitions for several existing charters. Most, if not all, are expected to sail through. But staff is recommending against two proposed charters.

Outside the meeting, charter supporters are expected to rally in support of increasing the number of these schools.

Consideration of a board motion criticizing rapid charter expansion is being postponed for a later meeting.

Their growth has been fueled by their popularity with many parents — and funded by foundations and philanthropists who’ve criticized the performance of L.A. Unified, which has struggled to raise academic achievement. Most of the district’s 650,000 students are from low-income Latino families.