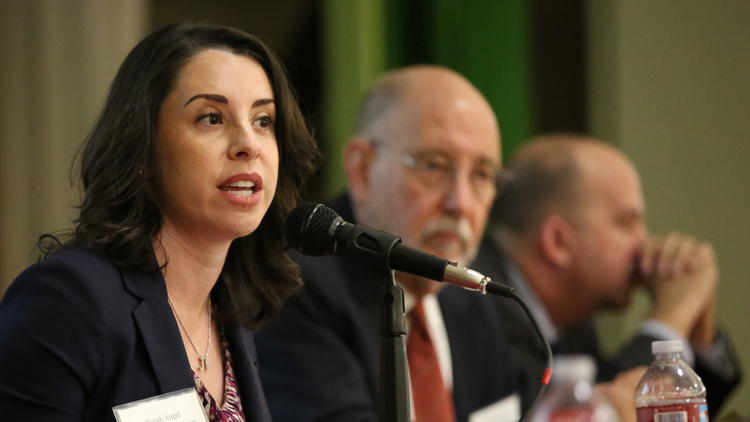 Sarah Angel, a regional director for the California Charter Schools Assn., praises charters at a recent forum on the future of Los Angeles public education. A new group is trying to launch more of these schools.  (Al Seib / Los Angeles Times)

Dec 7, 2015  6:13PM  ::  A new organization set up to create new, higher-performing public schools in Los Angeles has released a list of 28 successful campuses that it said would serve as models.

Those schools, which include charters, magnets and traditional public campuses, are viewed as stellar examples of how to educate students in the L.A. Unified School District. They are being touted by those who, at least initially, had proposed enrolling half of L.A. students in charter schools over the next eight years.

These schools are the kind of high-quality campuses that the group, Great Public Schools Now, wants to replicate, Bill Siart, chairman of the locally based nonprofit, said in a news release.

“It’s critical that we identify what is working in our education system and seek to expand those successes," he said. "Through our effort, we will be targeting our resources to grow these kinds of proven models in specific areas of need.”

The successful schools cited include Garfield Computer Science Magnet, in East Los Angeles, where, according to the group’s data, 94% of students are from low-income families and 77% met or exceeded the state’s academic targets for English Language Arts based on state testing in 2015. Another highlighted school is Synergy Quantum Academy, a charter high school in South Los Angeles. At that school, 96% of students are low income, while 67% met or surpassed the state learning goals in English, according to the data.

The full list includes 16 charter schools, eight magnets and four traditional neighborhood schools. Each has a low-income enrollment of at least 75% and more than 60% of students met state targets in English.

“Each of these schools proves that all students can learn, regardless of socioeconomic background,” according to the group’s release. “While there are challenges in educating students of need, those challenges are not insurmountable.”

Charters are independently managed and exempt from some rules that govern traditional schools. Most are nonunion. Magnets are district operated and typically offer a special academic program. They were set up initially to encourage voluntary integration.

Charter groups with schools on the list include Alliance, Camino Nuevo, KIPP and Green Dot.

The magnets include those based at Commonwealth Avenue and Canterbury Avenue elementary schools, at Madison Middle School and at Fremont and South East high schools.

Questions still surround Great Public Schools Now, including the names of the financial backers and how much money they hope to raise. A confidential draft proposal, obtained by The Times, called for raising $490 million. Critics have questioned whether the underlying goal of the original draft plan — which called for more than doubling the number of charter schools — has changed. That draft was apparently intended for supporters and potential donors. At the time, philanthropist Eli Broad was spearheading the effort through his foundation.

The project will be carried forward by a board that is being assembled through the efforts of Siart, a former banker who started a company to run the office operations of charter schools. The Eli and Edythe Broad Foundation will control a seat on the governing body, but Eli Broad is not expected to take part personally, said Glenn Gritzner, a spokesman for the new group.

The L.A. Board of Education postponed action, initially scheduled for Tuesday, on a motion by board member Scott Schmerelson that criticizes the original charter expansion plan and all “external initiatives that seek to reduce public education in Los Angeles to an educational marketplace and our children to market shares.”

Charter school advocates also have planned a rally for Tuesday. In a release Monday, they asserted that “charters are outperforming district schools on every measure,” a contention district officials dispute.

December 7, 2015 10:47 am  ::  Great Public Schools Now, the outside group seeking to expand the number of LA Unified schools serving students in high-poverty neighborhoods, has released a list of district schools — most of them charters — that represents “the kinds of schools” the organization intends to replicate in the years ahead. 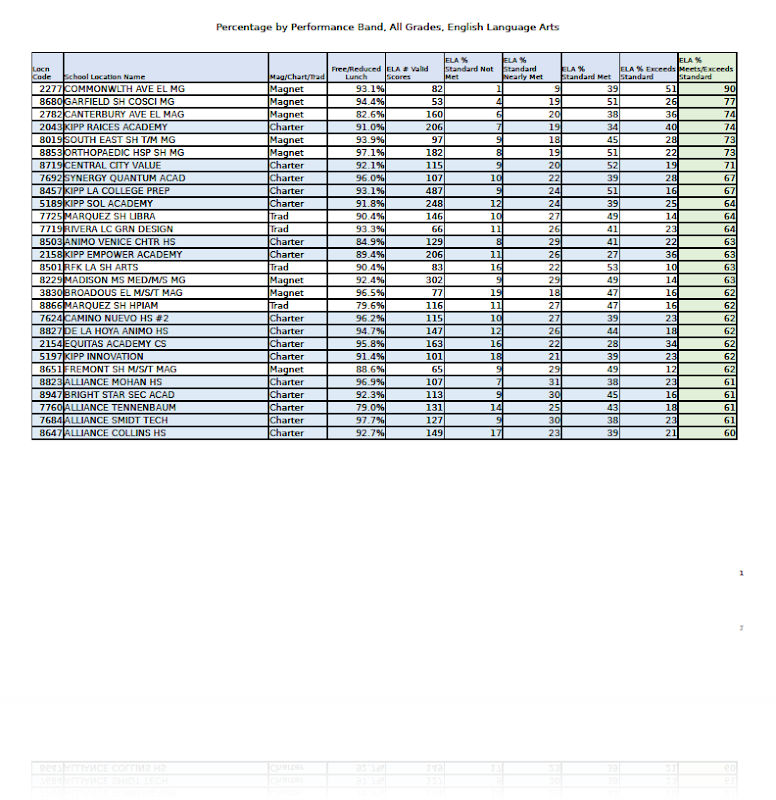 The new group, an outgrowth of a plan from the Eli and Edythe Broad Foundation, has identified 16 charters, 8 magnets and 4 traditional schools within the district that have more than 75 percent of students qualifying for free and reduced-price meals and more than 60 percent of students who meet or exceed standards for English Language Arts.

“These schools deliver the kind of high-quality education that Great Public Schools Now will seek to help replicate,” Bill Siart, chairman of Great Public Schools Now, said in a press release today. “It’s critical that we identify what is working in our education system, and seek to expand those successes. Through our effort, we will be targeting our resources to grow these kinds of proven models in specific areas of need.”

The plans of Great Public Schools Now, first revealed by the Broad foundation over the summer, has roiled LA Unified as few issues have before. It has left the community sharply divided between supporters of charter schools as a better option for students and charter opponents, who see the plan as a major threat for its potential to drain students and resources from an already financially-challenged district of more than 600,000 students.

The group is seeking to raise nearly half billion dollars in an effort that was originally aimed at creating 230 charter schools to serve half the district’s student population. Once the plan was formalized under the new organization, its leaders said the effort might not reach 203 schools but would include financial support for high-performing traditional schools in low-income areas.

At its monthly meeting tomorrow, the LA Unified board is scheduled to vote on a resolution from member Scott Schmerelson that would put the board on record as opposing “external initiatives” that serve anything less than the entire district.

In terms of deciding the criteria for whether a school has or could become high-quality, the group said it would base decisions on “multiple measures such as state assessments, graduation rates, and other metrics.”

The 28 schools cited as examples include several common elements, GPSN said in its release. They include evidence that the schools have demonstrated an ability to “provide all students with a high-quality education” and that because “multiple models” have succeeded, “Great Public Schools Now is considering how to invest in multiple types of public schools to expand the number of high-quality options for students throughout Greater Los Angeles.