OpEd by Lisa Lewis in the Los Angeles Times | http://lat.ms/1RColaF 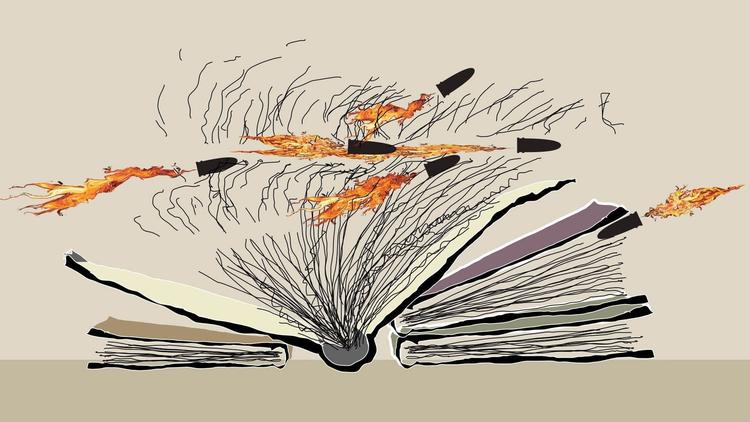 8 Dec 2015  ::  The day of the mass shooting in San Bernardino, my son's high school was placed on a short lockdown. He was remarkably nonchalant when I picked him up. “It was just a Level One,” he said, brushing off my concerns. “Everything's fine now.”

It wasn't, in fact; the horror was still unfolding and would come even closer to home that afternoon, when law enforcement found a veritable arsenal in the assailants' Redlands townhouse. But I recognized my son's need to normalize what had happened.

Preparedness is key. But there are possible downsides to these morbid war games. -

During a Level One, my son explained, teachers lock their classroom doors and lower the blinds. Some continue with the day's lesson plans. Others choose to take the more extreme measures required during a Level Two or Three. They turn off the lights and instruct the kids to turn off their cellphones. They ask everyone to gather silently in the corner of the room farthest from the door and windows.

Once they're given the all-clear signal, teachers may take additional time away from instruction to discuss what just happened, knowing that it's hard for kids to snap right back to Latin or biology when they've just been contemplating a shooter on the loose.

I may be 33 years my son's senior, but in many ways he's more worldly. When I was in high school in the San Fernando Valley in the 1980s, the terms “active shooter,” “lockdown” and “shelter in place” weren't buzzwords. “Active shooter” entered the lexicon not long after the Columbine massacre in 1999. “Lockdown” has been around longer, but until recently was most commonly used in prisons.

In the wake of the Sandy Hook attack, the Department of Education released guidelines for school emergency plans. Specific requirements vary by state. California's Education Code doesn't mandate “active shooter” exercises but does expect school districts to develop comprehensive safety procedures for each campus. Some schools around the country, eager to stay ahead of the curve, have taken it upon themselves to stage simulations complete with uniformed officers, fake blood and student actors. Sometimes schools announce drills in advance; sometimes not. The goal is to minimize the “freeze” response, which can prove fatal. Instead, participants learn to “Run, Hide, Fight.”

I get it: Preparedness is key. But there are possible downsides to these morbid war games. For starters, we don't know how kids may respond to them in the long term. (There's little research on the subject.) And they scare the hell out of the community. An “active shooter” drill at an Irvine elementary school in August was realistic enough that surprised neighbors called the police. Responding officers were unaware of the drill.

Our schools are confronting the new normal through preparations that would once have seemed ridiculous. At my daughter's elementary school, the Parent Teacher Assn. voted to buy portable toilets and privacy curtains for kids to use during lockdowns. It was a prudent decision. After the school's last lockdown, my daughter told me that a fellow second-grader had to pee in a trash can, shielded by a flip chart the teacher set up to provide privacy.

Somehow, we've gotten to the point in California where, like earthquakes, school shootings are an acknowledged part of our kids' lives.

Each October, the state goes all out publicizing the Great California ShakeOut. The chirpy online “ShakeOut Shop” offers T-shirts, coffee mugs and buttons reminding Californians to “Drop, Cover and Hold On” in the event of an earthquake. Can a similarly upbeat “Bullet-Wise” preparedness day be far behind?

Teaching kids to “Run, Hide, Fight” reinforces the nihilistic view that mass shootings are inevitable, diverting energy from the struggle to stop them. Instead of crafting catchy phrases to help kids stay safe in the event of an atrocity, we should work toward stronger gun ownership background checks and assault-weapon restrictions. We need more than preparedness; we need prevention.

Lisa Lewis is a writer based in Redlands. Her last piece for the Los Angeles Times was on fundraising to keep high school sports afloat.