THE NEXT SUPERINTENDENT: L.A. Unified must decide on an insider or outsider as its next chief and whether to embrace aggressive reform 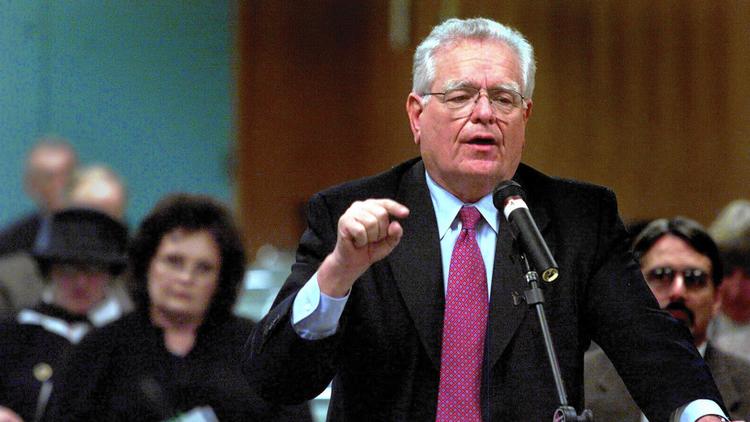 Former Supt. Roy Romer, a three-term governor of Colorado, said heading L.A. Unified was the most difficult job he ever had. (Robert Durell, Los Angeles Times)

January 7, 2015. 4:00 AM  ::  As a three-term Colorado governor, Roy Romer, a Democrat, had to deal with a combative Republican majority in his state Legislature. He later headed his party's fractious national committee.

But nothing was as difficult, he said, as running the Los Angeles Unified School District.

"Educating kids in a large urban city is difficult by default," said Romer, who headed L.A. Unified for six years. "You have a whole lot of social and economic pressures. … Los Angeles is especially tough because it's so large, so diverse."

And so political, he said.

In the eight years since Romer left, the school system has changed top leaders four times, including the October departure of John Deasy, who left under pressure.

The nation's second-largest school system now finds itself at a crossroads. Does the system go with a leader from the inside who knows the system and its players? Or does it go with an outsider who would be charged with making rapid progress and difficult decisions while working to understand a byzantine bureaucracy?

For decades, leading L.A. Unified has involved managing factions vying for leverage, including the teachers union, administrators and civic leaders. The job has become further complicated by competing visions of the best way to improve schools — a debate that has raged nationwide.

Klein is among the civic and corporate elite who praise leaders such as Deasy, a veteran superintendent who arrived from a senior post at the Bill & Melinda Gates Foundation with a "reform" mantra for rapid change. The former Los Angeles superintendent favored forceful strategies, including replacing the faculty of schools with persistently low test results and using students' scores in teacher evaluations.

Former Supt. Ruben Zacarias, for example, was pushed out because he was widely regarded as an insider who was unwilling or unable to challenge colleagues with whom he spent his entire career. Later, outsider David Brewer, a retired admiral, pledged to shake things up. But he never mastered the district's complexities and politics, in the view of senior district officials and civic leaders.

When Deasy left, former Supt. Ramon C. Cortines, 82, returned. He said he is willing to remain until a replacement is found; a search is unlikely to start before the end of the school year.

By then, elections for four of seven board seats will have concluded. A new board majority will have to agree on whom it wants and what it wants. That dynamic, however, could change all over again in election cycles that occur every two years.

It follows, he added, that "the demise of the superintendent-board relationship is the biggest reason superintendents lose their job."

Urban superintendents also face the challenge of dealing with large numbers of the lowest achieving students — in Los Angeles, many of them don't speak English fluently. Even so, school chiefs are expected to show rapid progress.

And yet there's no proof that any big-city district has closed the gap in achievement that separates poor Latino and black students from white, Asian and wealthier students, said Russ Whitehurst, director of the Brown Center on Education Policy at the Washington, D.C.-based Brookings Institution. He said research also suggests that superintendents have less effect on test scores than educators closer to the classroom.

Those supporters say the Board of Education needs to look for a leader who will prove just as impatient on behalf of students.

"We need another superintendent to make gains as great and as quickly as John Deasy," said Bruce Reed, president of the Los Angeles-based Broad Foundation.

But such superintendents can overreach, said Jeffrey R. Henig, an education professor at Teachers College of Columbia University.

"Pushing too hard and too fast puts district leaders at risk of backlash — not just from the recalcitrant and self-interested, but from potential allies who could be won over with a more incremental and inclusive approach," Henig said.

An internal candidate would have some advantages, said David Bloomfield, professor of education leadership at Brooklyn College. "It's less about national leadership and experience as a superintendent and more about somebody who really knows the local district and can work with the leadership on all sides, dozens of sides," he said.

Complicating the picture for the next superintendent is the increasing assertiveness of United Teachers Los Angeles, a force in school board elections. The union is calling for more classroom resources and staffing, along with less reliance on test scores.

To be successful, the next superintendent may need the skills to craft a "grand bargain" between competing interest groups, provided that these groups are willing to compromise, said Charles Kerchner, a research professor at Claremont Graduate University.

Even before the current battles over school reform, urban superintendents have not lasted long.

In 1999, their average tenure was 2.3 years, according to surveys conducted by the Council of Great City Schools. By 2010, it had risen to 3.6 years, with observers calling for greater stability. It's now 3.2 years.

(Bucking that trend locally is Long Beach Unified, with two superintendents — Carl Cohn and Christopher J. Steinhauser — over the last 22 years and a reputation for steady progress and less confrontational labor-management relations.)

Romer, an outsider, navigated through six challenging years and departed on his own terms. His successor, Brewer, was forced out after two years.

In 2008, veteran Supt. Cortines came in, initially to help Brewer, then to assume the top job for 21/2 years. Behind the scenes, some civic leaders, including then-Mayor Antonio Villaraigosa, concluded that Cortines wasn't moving fast enough and nudged him toward retirement.

Deasy was brought in. His policies prompted resistance, but his undoing was also a product of alienating board members and teachers, as well as missteps with an effort to provide iPads to all students and a new student records system.

Romer, 86, said that despite the challenges, he looks back fondly on the experience.

"It was the most joyous job I had, 16 hours a day," he said. "I loved it, because it's the most important work. There is so much at stake."