CIVICS INSTRUCTION MOVES UP IN CLASS: More States Mandate Tests on the Subject Amid a Movement for Use of Citizenship Exam 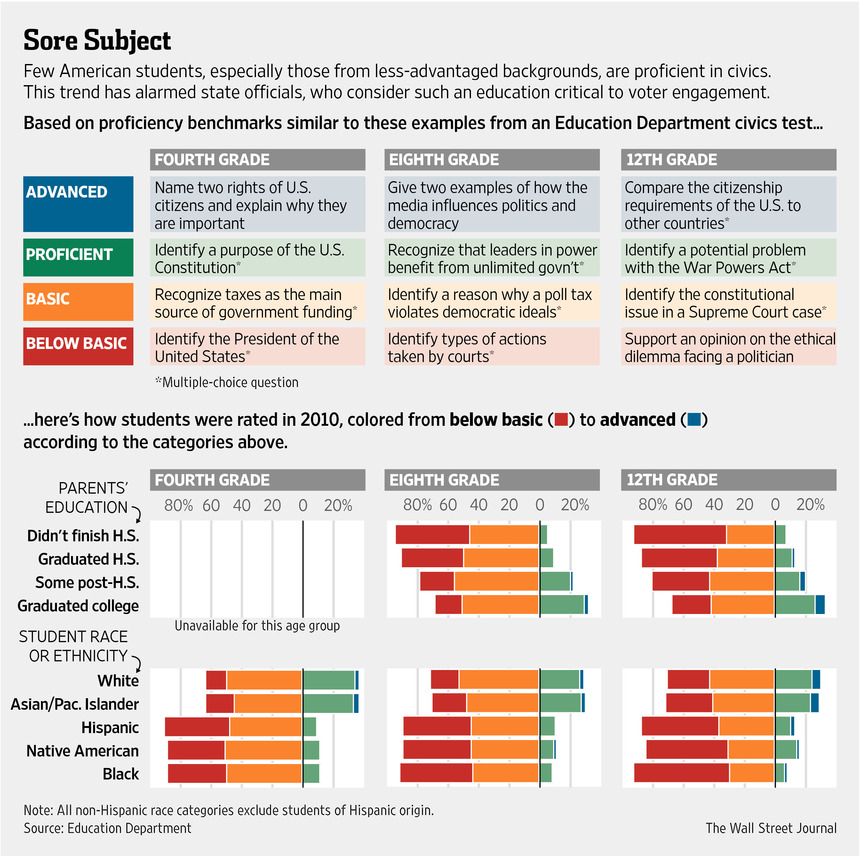 Updated Dec. 26, 2014 12:48 p.m. ET  ::  After years on the back burner of the nation’s educational agenda, civics is making a comeback, with a number of states mandating new classes or assessments and a burgeoning national push for high-school seniors to pass the exam required of new citizens.

For the first time this past school year, a civics exam in Florida counted toward students’ grades, following a mandated class and exam instated the year before, while students in Tennessee started facing a required test two years ago. The Massachusetts Board of Higher Education mandated that the subject be a key component for learning at the state’s colleges and universities starting this school year. Both California and Illinois have statewide task forces and local projects aimed at embedding civics in schools.

“We’re seeing more rumblings of states and local districts recognizing the need for civic engagement, especially for youth,” said Paul Baumann, director of the National Center for Learning and Civic Engagement at the Education Commission of the States, a nonprofit.

Recent national reports show students could use a lesson in civics, which generally studies the role of citizens in public issues and covers such topics as how to dissect current events or apply the Constitution to modern issues. About two-thirds of students tested below proficient on the civics portion of the National Assessment of Educational Progress in both 2006 and 2010. Only 10 states require a social-studies test to graduate from high school, according to the Education Commission of the States. 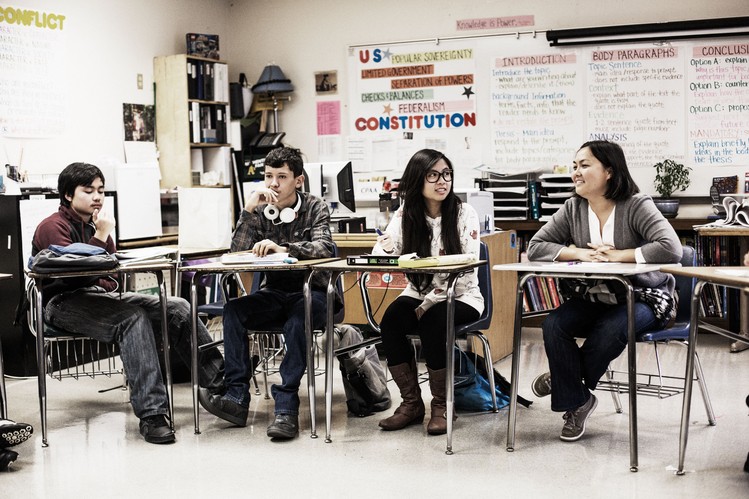 High school seniors in Oakland, Calif., have a discussion with their teacher, Ji Lee, right, about gun laws and public safety last week. Talia Herman for The Wall Street Journal

Recent federal policies, such as No Child Left Behind and Race to the Top, linked money to tests on math and reading, and concerns about a shortcoming in job skills has pressured leaders to focus more on science, technology, engineering and math.

A Center on Education Policy study found in 2007 that about 45% of elementary schools reported cutting time for other subjects to focus on math and reading. And only about one in three elementary teachers reported covering civics subjects on a regular basis, according to federal survey data taken in 2006 and 2010.

Proponents say enhancing civics instruction could help reverse low voter turnout—about one in five adults ages 18 to 29 voted in the 2014 midterms, according to researchers at Tufts University’s Tisch College of Citizenship and Public Service—and address mounting frustration with dysfunction in Washington. They also say it can help increase engagement by minorities and the poor, who typically receive less civics education than more affluent and white students.

“There’s a stronger sense from people now that we must do something in order to be functional as a nation and at the community level,” said Meira Levinson, an associate professor of education at Harvard University who has studied civic-empowerment issues.

Meanwhile, coalitions in seven states have launched a growing movement to require students to pass the U.S. citizenship exam before they can graduate. By the end of next year, proponents aim to introduce and pass legislation in 12 to 15 states.

“So little has been done over so many years now, let’s make sure we take that one solid first step,” said Sam Stone, political director for the Civics Education Initiative, an affiliate of the Joe Foss Institute, a nonpartisan nonprofit based in Scottsdale, Ariz.

But some backers of more civics study doubt the value of the 100-question citizenship exam, arguing it is more about rote memorization than learning how to be a better citizen.

“This is addressing the right problem with the wrong solution,” said Ted McConnell, executive director of the Campaign for the Civic Mission of Schools, a nonprofit that advocates for civic learning.

American high schools typically offered three classes in civics and government until the 1960s, according to Mr. McConnell’s group. More typical nowadays is an “American government” class that focuses on the structure of democracy more than the practicalities of making it work. Mr. McConnell said schools need more hands-on instruction now, not another test.

Some caution that jumping into civics instruction could invite teachers’ political biases into the classroom. “Teachers need training on how to lead discussions on controversial issues,” said Anna Saavedra, associate policy researcher for RAND Corp, a nonpartisan nonprofit, who supports greater attention to civics in the classroom. “There are ways for teachers to learn that, but it’s a learned skill.” Only 15% of civics and government teachers surveyed in a 2013 national report from Tufts University’s Tisch College of Citizenship and Public Service said they had been mentored or coached by an expert or administrator.

In Oakland, Calif., about 70 teachers brainstorm together ways to help their students engage in civics literacy with social media, blogging and research as part of an initiative funded by the S. D., Bechtel Jr. Foundation and the John D. and Catherine T. MacArthur Foundation.

For a project last year on gun rights, Ji Lee asked her 12th-grade students to talk with people outside their schools and homes about the issues to become more familiar with asking questions and getting answers. This year, they are also focusing on free-speech issues and developing a blog.

“There has definitely been a push to make students be engaged,” said Ms. Lee, who teaches English, American government and economics. “It’s a significant move forward.”