BROWN SHOULD BEND ON SCHOOL BONDS: Gov. Brown takes a hard line against issuing bonds and believes the state should get out of building schools 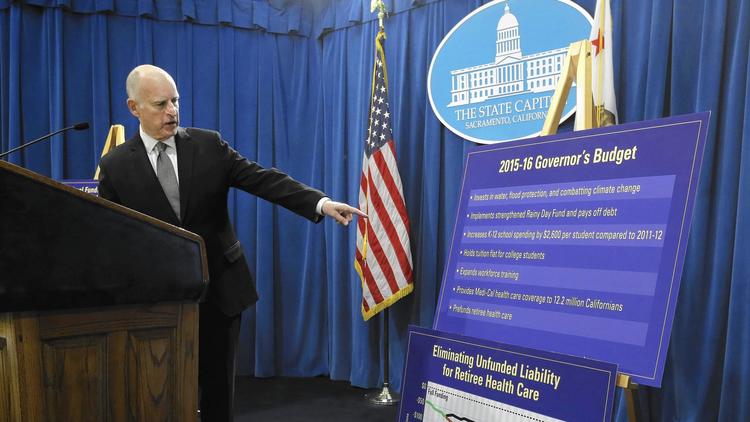 19 Jan 2015  ::  SACRAMENTO — Since when did the state government chipping in to help build classrooms for kids become a bad thing? Since Jerry Brown returned as governor, that's when.

Correct that: It's not a bad thing for most people in the state Capitol — only the contrarian governor.

Brown just doesn't like selling bonds — borrowing — and acquiring debt. And you can't entirely fault him. That's generally a wise policy in the abstract.

Brown, of course, has a credibility problem in opposing more bond debt. And you know what's coming here.

"It really boils down to priorities," says Dave Cogdill, president of the California Building Industry Assn., part of a coalition sponsoring a ballot initiative that would authorize a $9-billion school construction bond. "The people have their priorities and the governor has his. And in this case, they don't match up.

"It all depends on what the governor wants the state to go into debt for. Billions for high-speed rail doesn't seem to bother him. I'm a little confused."

Voters in 2008 approved selling $9 billion in bonds to start building a bullet train. But they soured on the project after its estimated cost doubled. For Brown, however, it remains an obsession.

Liu sits on the Allocation Board, which doles out state bond money — when there is any — to match local funding for school construction and modernization.

"There's an incredible need," she says. "We have so many buildings not even earthquake-proof. We're worried."

In turning his back on a new school bond, Brown doesn't exactly rail against borrowing. He focuses on other complaints. But the governor does make it clear he thinks the state should basically get out of the school construction business.

"The locals can do it more efficiently, and I think they're in the best position to judge how to allocate priorities," Brown told reporters after unveiling his budget proposal.

He was asked whether that implied opposition to seeking voter approval of a school bond in 2016. "Well, it's certainly not support," he replied.

Brown argues that the current process for allocating state bond money is "overly complex and cumbersome." He also contends it doesn't force school districts to prioritize between funding facilities and classroom needs.

Another Brown complaint is that the state money is distributed on a first-come, first-served basis, and this gives an edge to big districts able to hire lots of application writers and lobbyists.

And, he notes, the current system was created before districts were allowed to pass local school bonds on a 55% vote. A two-thirds vote was required until 2000. Since then, bonds have passed 80% of the time. So Brown contends the districts have the ability to raise their own construction money.

To help them generate the money, the governor also wants to raise the legal limit on local bond debt, jack up housing developer fees and use maintenance money to fund construction. In other words, everyone chip in except the state.

"That's really a scary thing to think about," says Joe Dixon, assistant superintendent of the Santa Ana Unified School District, referring to raiding the maintenance pot to pay for construction. "During the recession, schools deferred a lot of maintenance, and now it's critical."

Dixon is chairman of the Coalition for Adequate School Housing, which has drafted the bond initiative and is awaiting the state attorney general's approval to start collecting the roughly 366,000 voter signatures needed to place it on the November 2016 ballot.

Dixon adds: "We agree with simplifying the [bond] program. We don't agree that pushing it down to the local level is any solution at all."

Critics of Brown's policy say that some districts would be rich enough to finance construction themselves, but poor districts could never go it alone. Brown says the state could continue to help the impoverished districts.

Last year, a school bond bill zipped through the Assembly and three Senate committees without a single "no" vote. Then, bowing to Brown, legislative leaders killed the measure as it headed to the Senate floor.

So the bond coalition is bypassing the Capitol with its initiative. Under a new law, the initiative sponsors and legislators ultimately will be encouraged to compromise on a bond bill. Expect that effort next year.

Liu is hoping for that. She agrees the current system needs to be fixed. "The process takes too long and frustrates everybody," she says. "But I do think the state has a [funding] responsibility."

Freshman Assemblyman Patrick O'Donnell (D-Long Beach), who heads the education committee, also is pushing for a bond bill. "A 21st century education requires a 21st century classroom," says the longtime government teacher. "Too many classrooms aren't even wired for the Internet."

Come on, governor, don't be so cheap. Give the kids a good place to learn.