DEC. 25, 2014  ::  A steady stream of teenagers fidgeting with forms and their backpacks flowed through the Midwood High School college office one day this month, all with lists of questions on their minds.

But one of the school’s two college counselors was nowhere to be found. She had taken refuge in another office, a quieter spot where she tried to pump out as many college recommendation letters as she could.

“We take turns,” said Lorrie Director, the other college counselor at Midwood, in Brooklyn. “I write at home, at night and on weekends, I squeeze them in when I can, but even then it’s not enough.”

While small private schools can often afford to provide their students with tremendous hand-holding, large public high schools across the country struggle with staggering ratios of students to guidance counselors. Nationally, that ratio is nearly 500 to 1, a proportion experts say has remained virtually unchanged for more than 10 years. And when it comes time to apply to college, all of the students need help at once. 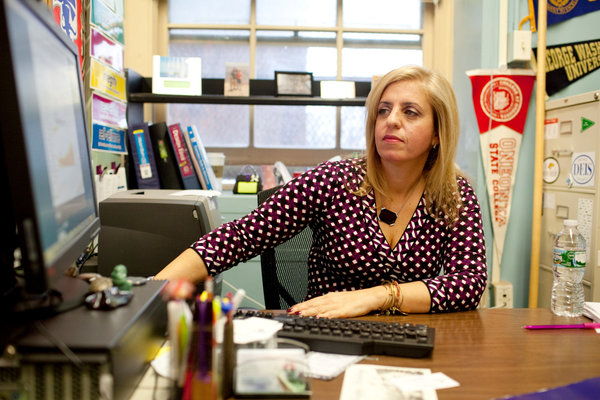 Lorrie Director, a college counselor at Midwood High School in Brooklyn. The national student-to-counselor ratio is 478 to 1. Credit Andrew Spear for The New York Times

“It’s a huge problem, massive,” said Mandy Savitz-Romer, a senior lecturer at the Harvard Graduate School of Education who studies school counseling. “Counseling is seen as an extra layer, a luxury. If I’m a school leader and I’m trying to lower class size, what’s 50 more kids on your caseload?”

There are different approaches to shepherding high school students to college. In some schools, like Midwood, there is a small office, separate from the guidance counselors, where a dedicated team handles applications, offers advice and writes scores, or even hundreds, of reference letters. In other schools, guidance counselors or the leaders of advisory groups guide students.

And in some schools, there is nothing. The federal Education Department’s Office for Civil Rights said this year that one in five high schools in the country had no school counselor at all.

When it comes time to apply to college, students who are insufficiently counseled can easily stumble into making poor decisions, especially if no one in their family has gone to college before.

They might “undermatch,” for example, by applying just to nearby schools they have heard of, rather than to the best institution they are qualified to attend. They might not fully understand the financial aid process, and skip over schools with high ticket prices, even if they are eligible for a free ride. And plenty of students who are perfectly qualified to go to college might not apply at all.

The issue has received increasing attention. New York City has hired 250 new guidance counselors this year alone, and the City Council recently passed a bill that would require the city’s Education Department to report on the number of counselors and their ratio to students. Just this month, Michelle Obama, at a White House conference on increasing access to college, spoke about the importance of college counseling.

Nonetheless, the national student-to-counselor ratio, according to the National Association for College Admission Counseling, is 478 to 1, nearly double the recommendation of the American School Counselor Association.

Until this fall, Shelly Landry spent six years as the head of school counseling for the school district of Minneapolis. Minnesota has a ratio of nearly 800 students for every counselor, Ms. Landry said, giving it the second highest ratio in the nation, behind California.

In that role, she became familiar with the coping mechanisms of certain overworked school counselors: They would simply reuse the same college reference letter over and over again, plugging in new student information as they went.

“They will tell you,” Ms. Landry said of some college admissions officers, “that when I get a letter from such-and-such counselor, I don’t even read it, because I know their letter.”

Not every college requires a recommendation from a school counselor, though most selective ones do. Those schools generally understand the pressures at large high schools and will not hold it against their students if the letters appear too fill-in-the-blank, said Katherine Cohen, the founder of IvyWise, an admissions consulting firm in Manhattan. But Kim Nauer, education project director at The New School’s Center for New York City Affairs, said a weak letter can be a lost opportunity for a senior with less-than-stratospheric SAT scores.

“The numbers are not in these kids’ favor,” she said. “They need the words.”

Even in the face of daunting ratios, said Ms. Landry, there are schools where the college process gets done, and appears to be done well.

At Francis Lewis High School in Queens, which has more than 4,000 students, about a dozen parents volunteer every year to help process application materials and stuff envelopes for colleges that do not accept electronic submissions.

At Midwood, which has about 3,900 students, 74 percent of students were enrolled in a college or postsecondary program six months after graduation, according to city data, well above the city average of 51 percent. (About half of Midwood’s students apply to the high school based on measures like their grades, and the rest of the student body is pulled from the surrounding neighborhoods.)

There are two college counselors at Midwood for about 800 seniors each year, most of whom apply to college. The office’s support staff has been cut in recent years from five people to two.

But the school’s guidance counselors are trained to get students thinking about college in advance and to answer some basic questions about the process. The entire guidance department has attended an Education Department Options Series, a training at the Goddard Riverside Community Center intended to help get students to college. The college counselors at Midwood also speak to the students in groups, in workshops and during some of their class time junior year.

With so many students to sort through, they also have systems in place to ensure that they know as much as possible about their charges — and that they are writing about the correct person.

On a recent rainy afternoon, heavy boxes stuffed with long manila folders were stacked around the college office, a room covered with dozens of school posters and pennants, from Howard University, Brown, Arizona State, Stony Brook University and the College of Saint Rose, to name a few.

On the cover of each folder is basic student information, like a name, contact information and test scores. The student’s photograph is also affixed to the front, because, as Sharon Kaminer, the college office secretary, explained, the large school often sees several seniors with the same name.

Inside, the folders contain teacher recommendations, an autobiographical essay and a student profile the applicants fill out, as well as a “parent brag sheet” that asks questions like, “If you had to describe your child choosing only five-six adjectives, which ones would you use?”

Students lined up that afternoon to ask questions about financial aid forms, for example, or about what their immigration status might mean for a particular application.

One girl brought chocolate chip cookies because, she explained, she asks a lot of questions. She said her goodbyes, left the office and was immediately replaced by somebody else.

“We get it done — I don’t know how, but we get it done,” Ms. Director said over the telephone. She laughed, and added, “You can quote Sharon on that: with a little bit of fairy dust.”

A version of this article appears in print on December 26, 2014, on page A1 of the New York edition with the headline: Little Guidance: 500 Students Per Counselor. 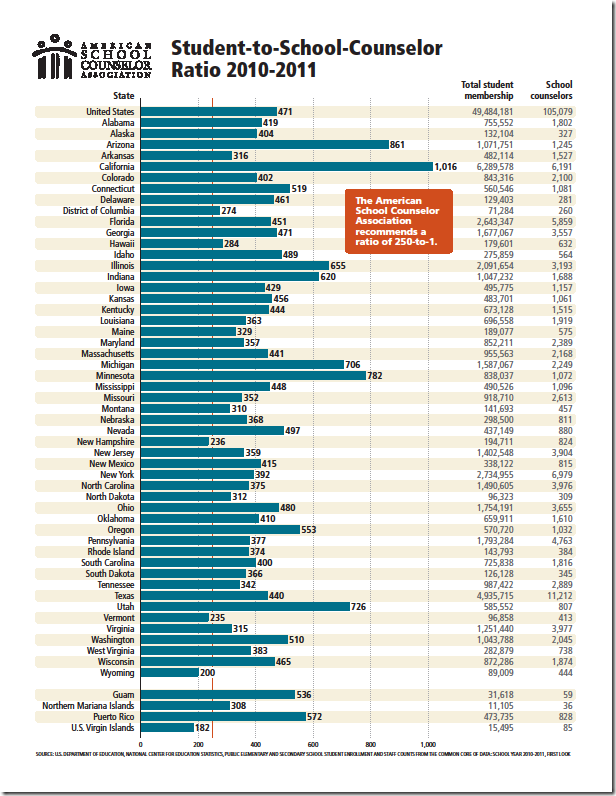