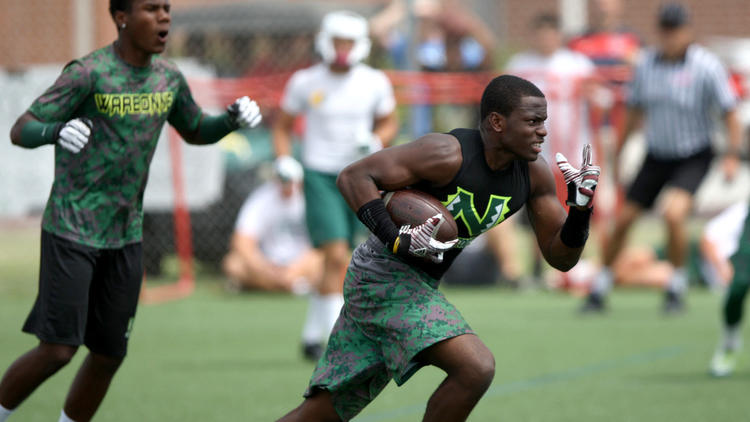 Narbonne defender Lawson Hall returns an interception during a passing tournament this summer. Hall and his Gaucho teammates were sidelined from practicing much of this week because of extreme heat. (David McNew / For the Times)

After being sidelined by heat wave, LAUSD football teams will be face opponents after just one full practice

At 3:12 p.m. on Wednesday, the Los Angeles Unified School District's athletics office sent an email to the athletic directors and assistant principals from its 83 schools informing them that all outside activities and practices were canceled because of heat.

Football coaches, hoping to practice in the early evening after being limited to indoor activities by the heat on Monday and no practice on Tuesday because of a professional development day, were caught by surprise. Many thought the conditions were suitable for light workouts.

Ivan Moreno, the coach at Canoga Park, sent his team into a gym that had no air conditioning.

"It's like 100 degrees and 60% humidity," Moreno said. "I had a kid tell me, 'Coach, let's go outside. It's nice. There's a breeze.' I told him, 'No, this is the LAUSD rule. This is what irony is.' There's people, in their infinite wisdom, sitting in an air-conditioned office, making a decision that should be made at a local district office."

"I'm about as cautious as it gets, and I think it's ridiculous," she said of not allowing teams to practice in the evening on Wednesday. "All the coaches have their OSHA website information that gives them the humidity and heat index. We've gone over the rules and regulations. What about the safety for kids not practicing?"

LAUSD was following the heat advisory issued by its office of environmental health and safety on Tuesday that read, "Due to the increased severity of the heat wave, all outdoor activities should be canceled or conducted indoors …"

Trent Cornelius, the district's athletics supervisor, spent most of the day trying to get permission for evening workouts from the district's operations department. He failed.

LAUSD football teams are scheduled to play on Friday, and they will be doing so with just one full practice — on Thursday, when drills typically are scaled down because of the game the next day. At a minimum, LAUSD schools will be at a disadvantage when facing opponents that didn't have the same practice restrictions.

Narbonne will play Gardena Serra and Dorsey will face Mission Hills Alemany, two private schools that had no issues about practicing outside.

"We didn't hit at all this week, and Alemany has hit every day this week, and it's 10 degrees hotter [there]," Dorsey assistant coach Ralph Caldwell said. "All we could do is lift weights, watch film and walk through on the basketball court. As a competitor, I want to play and the kids want to play, but is it a level playing field? I don't think so."

Is it also a safety issue?

"As long as teams can do meetings, film, lift weights and have a spot to do walk throughs, that's still allowing a team to prepare," Palisades Coach Tim Hyde said.

The question is whether LAUSD was correct in its cautious approach, particularly not allowing any teams to practice on Wednesday night, when temperatures had eased in various parts of the city.

Felicia Hall, the mother of standout Narbonne linebacker Lawson Hall, said, "If the district has our kids' safety first, I support it."

In the future, Cornelius said the "all or nothing" approach may need to be scrapped and "we're going to have more stakeholders at the table and more data about actual conditions across the city."

Meanwhile, let's hope everybody has patience and understanding for the teams, coaches and players who will try their best after a difficult week.

It might not be pretty on Friday night, particularly when yellow flags are flying everywhere because of penalties, but Hall insists, "I'm going to be leading my defensive chant" in the Narbonne stands.