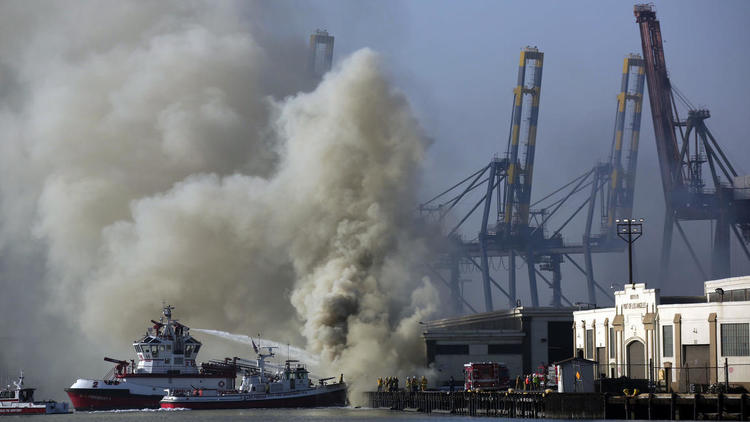 Los Angeles fire crews battle a wharf fire at the Port of L.A. where pylons soaked with creosote burned prompting concerns about air quality in the area.

Sept 23, 12:11 PM  ::  Potentially hazardous smoke from the stubborn fire at the Port of Los Angeles prompted air quality advisories and the evacuation of one elementary school Tuesday.

Firefighters have been struggling to extinguish the blaze, which was contained but had spread to World War II-era pylons soaked in creosote. As the fire wore on through the day, shifting winds sent smoke and fumes generated by the burning creosote over more communities.

Los Angeles firefighters use foam to control a dock fire at the Port of Los Angeles.

Earlier in the day, Los Angeles fire officials had recommended that two nearby schools -- St. Peter-St. Paul and De La Torre Jr. elementary schools, both in Wilmington -- close as a precaution. But L.A. Unified officials kept De La Torre Jr. open, saying in an email message to parents that they had determined toxic smoke from the wharf posed "no threat to the health of students or staff at the school."

After the start of school, however, the decision was made to evacuate De La Torre.  According to L.A. Unified, students were being taken by bus to Olguin High School in San Pedro.  They were to be brought back to De La Torre shortly before 12:30 p.m. to be released.

The decision to go ahead with class in the morning angered some parents, who cited miscommunication and lack of concern for health impacts. One of them was Michaela Garcia, 38, of Wilmington, who was waiting for her 9-year-old son to get out.

"It just seems to me the superintendent doesn't care about the students," Garcia said. "My son suffers from asthma."

Sitting in a green minivan, she said she was going to take the family to El Segundo for the day until the air quality improved.

Throughout the morning, parents arrived wearing blue and white masks to pull their children from school.

Some children used their hands to cover their mouths and noses.

It just seems to me the superintendent doesn't care about the students. My son suffers from asthma. - Michaela Garcia, mother

"They should have closed the school because of the toxic fumes," said Leti Valencia, one of several concerned parents who pulled their children out of school.

In their notice to parents, school officials had said they planned to implement a "modified shelter in place" plan, keeping doors and windows shut to keep the smoke out.

No injuries have been reported as a result of the fire, which authorities said was sparked by a torch-welding operation.

The blaze was contained to a 50-by-800-foot area, but firefighters were impeded by multiple layers of heavy timber soaked in dark, tar-like liquid creosote that continued to smolder. 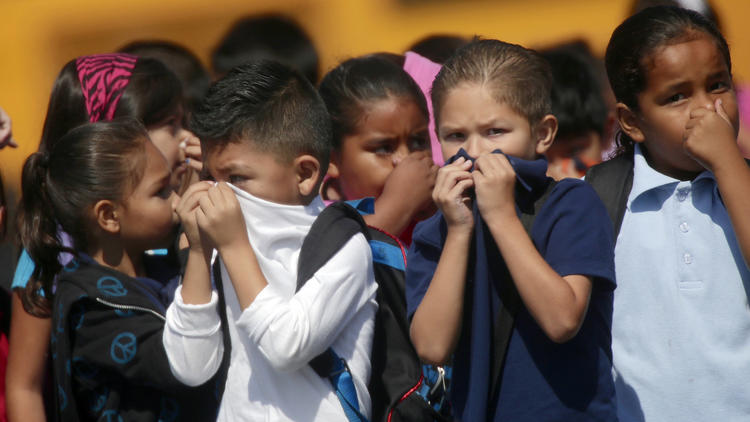 Smoke may linger for hours, with firefighters prepared to battle the blaze into the evening. Active flames were extinguished about 8:30 p.m. Monday night, hours after it was started by a torch-welding operation. But fire continues to smolder within the lumber, forcing firefighters to use jackhammers and bulldozers to gain access.

The port remained opened as crews worked to contain the tar that had leaked into the water, according to officials who gave a midday news briefing.

The smoldering blaze is the largest fire with the significant impact to the public since 1976, when a ship, the Sansinena, exploded while refueling, destroying buildings and shattering windows miles away.

Unreported above, but made obvious in the public discussions at yesterday evening’s  meeting of the LAUSD School Board Curriculum and Instruction Committee. was the obvious impact of the District’s not-ready-for-prime-time MiSiS student information system in this situation ….and the difficulty in retrieving students’ emergency contact information for people who needed it..

School Board member Zimmer disclosed that there had been difficulty in generating this information at De La Torre ES when it was needed.

In a moment of more transparency than he and District staff probably desired -  he requested further information about how the MiSiS system and team worked through the emergency and how they intend to address future situations. That information needs to be made public.

Getting report cards out – and certainly getting college-bound seniors’ transcripts out is important.

Getting youngsters out of harm’s way is critical.