Editorial: THE BAD OLD DAYS AT LAUSD …and 2¢ more or less

By The LA Times Editorial Board |  http://lat.ms/1suH7jR 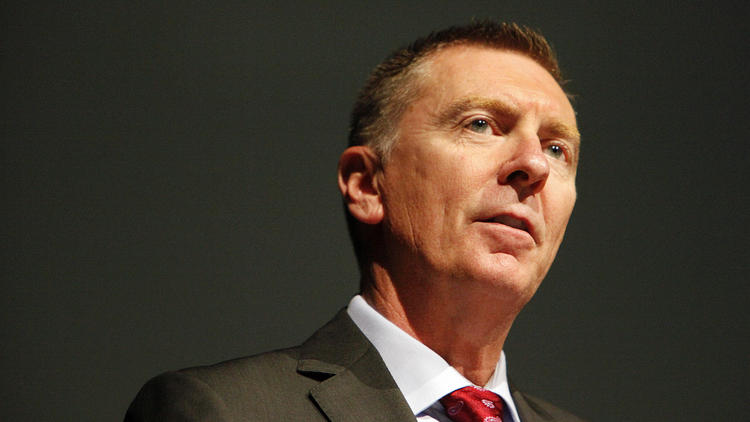 18 Sept 2014  ::  At L.A. Unified, tensions are high and crisis is in the air. The relationship between Supt. John Deasy and the school board that oversees him is at what is perhaps an all-time low. Deasy is again muttering about quitting; others are grumbling that he should be fired.

Not surprisingly, United Teachers Los Angeles, the teachers union, is practically giddy. The union has regularly lambasted the superintendent, calling his performance "anything but satisfactory," suggesting he be placed in "teacher jail" like a teacher accused of misconduct would be, and making it clear that it would like him to resign. If Deasy resigns, the leadership no doubt figures, it can go back to the good-old days.

Teachers are angry, and many would be happy to see the superintendent gone. But before anyone grows too nostalgic, let's remember a few things about the old days. -

The union's distaste for Deasy is easy enough to understand. His tenure has been marked by efforts to quickly push through new reforms that would leave teachers with less job security and authority. He often seemed unnecessarily dismissive of teachers' concerns. L.A.'s teachers saw their pay and hours cut during the recession — which was not Deasy's fault; the union agreed to it because budgets were strained to the breaking point — but then were given additional responsibilities, such has overseeing breakfast in the classroom, even though students could have eaten 10 or 15 minutes earlier in the cafeteria. Teachers have been under heavy pressure to raise student test scores and to allow those scores to be used as a big part of their job evaluations, while at the same time they watched Deasy testify voluntarily in a court case in favor of making it easier to fire them.

So, yeah, teachers are angry, and many would be happy to see the superintendent go. But before anyone grows too nostalgic, let's remember a few things about the old days. Life may have been easier for teachers in some cases, but it was not so great for students, especially poor ones.

Just a decade ago, when UTLA still exercised outsize influence on the school board, the worst teachers were routinely shuffled off to the poorest schools, in what became known as the "dance of the lemons."

Schools actively discouraged black and Latino students from taking the full series of college-prep courses that would qualify them for Cal State or the University of California; several L.A. Unified high schools didn't even offer all the courses for students who wanted them. Shameful.

Not only were the graduating classes at some schools a bare fraction of the size of the freshman classes, but the district didn't keep track of its dropout rate to know how bad It was. Dropouts literally didn't count.

That's not to mention the teachers — a tiny minority, to be sure, but almost never fired or forced to improve — who routinely screened movies that were unrelated to the curriculum or issued work sheets, while they sat in the back of the classroom reading newspapers instead of teaching.

Less money was spent on the poorest and least prepared students than on their more affluent counterparts.

High school students in L.A. Unified's lowest-income communities were routinely taught math by teachers who not only weren't math specialists, but weren't credentialed teachers. The district got around laws requiring actual math teachers by assigning substitute teachers instead. (If they didn't stay in the classroom for more than a month, the usual rules didn't apply.) There was a shortage of qualified math teachers, and the ones who were generally used their seniority to transfer to middle-class schools.

And by the way, it's not as if teachers didn't complain about Deasy's predecessors, although his impatience for change has raised the volume. Ten years ago, when then-Supt. Roy Romer imposed a scripted reading curriculum on teachers because so many students were getting to high school without basic literacy skills, the union howled in protest. But reading scores rose. UTLA also fought fiercely against former Supt. Ramon C. Cortines' program that invited charter organizations, nonprofit groups and reform-oriented teacher groups to submit competing proposals to operate some low-performing schools.

In a widely respected national measurement of big-city schools ... Los Angeles Unified's scores showed the second-highest improvement in the nation in 2013. -

No doubt the union wanted good things for disadvantaged students. It just placed a higher priority on what was good for itself and its members. Protecting teachers is the union's job; that's why it exists. But schools must have a different priority: to provide a good education to all children — and not just the ones from comfortable homes.

The school reform movement that many teachers so despise has not done everything right. In some cases it has been misguided — for example, it focused too heavily on the value of smaller schools — and in our opinion it has too often scapegoated teachers and overemphasized the use of standardized test scores in teacher evaluations. But its sense of urgency and its unwillingness to accept the status quo has been extraordinarily important. Specific changes it has championed, including the growth in charter schools and the empowerment of principals to pick their own teachers, have helped put new focus on students' right to a solid education.

The district has begun to change. Test scores have been trending up over the last 10 years. Dropout rates have fallen. More students of color are taking college-prep courses. In a widely respected national measurement of big-city schools, called the Trial Urban District Assessment, Los Angeles Unified's scores showed the second-highest improvement in the nation in 2013.

Deasy's impetuousness has at times hurt teachers, himself and even students. He mishandled the project to buy tablets for students, and his early emails with would-be contractors on the iPad project are rightly under scrutiny. But the review is ongoing, and he may well be cleared of impropriety.

The school board, most of whose members seem to have genuine concern for the well-being of students, should be asking itself how well off those students will be if Deasy feels pressured or micromanaged into leaving or is fired. How well off were they when almost nothing happened in the district without the approval of UTLA?

Perhaps the best part of the bad old days was when the LA Times Editorial Board parroted Eli Broad and Richard Riordan – and their freebooter compadre Antonio Villaraigosa  - all of whom who pirated away schools and revenue from the District in the name of “School Choice”?

“’Choice’, me hearties? I’ll choose this one and you chose that one!”

(Friday is Talk Like a Pirate Day – the pirate+parrot metaphor is a subtitle reference to that day when we can all channel our inner Robert Newton/Johnny Depp/Errol Flynn and chew scenery with the best worst of them! “There be nothing subtle about pirates ye scabrous scalawags – one man’s bloodthirsty buccaneer is the next man’s entrepreneurial philanthropist, Jim m’lad!  Arrggh!”)

Most of the positive progress – Reform if you want to call it that - described above was begun well before John Deasy set foot in LAUSD. To ascribe credit to Deasy for raising the bar for graduation requirements, A thru G, access to college ready courses and the rest  ignores the hard work done by many over the years. The iPad/Pearson debacle happened on Deasy’s watch, MiSiS is happening on his watch. The “Bad Teacher” witch hunting, the ‘teacher jailing”, the failure to bring UTLA along on Breakfast in the Classroom (good thinking/poorly delivered), all happened on his watch.

The weakness of those recent things result from what he calls “urgency” and his critics call impetuousness, haste or imperiousness. Or perhaps we just misinterpret the crystal clarity of his all-seeing vision?  The photo the Times has chosen (above) mimics the  perspective of a peon upon the great man on his white horse in the warm glow of sunset.

The allegations that the bid was fixed on the Apple/Pearson Deal is Federal Criminal Indictment, Sixty Minutes with Mike Wallace material, …not wait-and-see how the investigation turns out kind of stuff. And I remind the editorial board that to date the “investigation” has been by the media – including the Times!

John Deasy is entitled to the presumption of innocence. But we are all entitled to effective leadership of LAUSD. And Deasy and all of us: Voters, taxpayers, teachers, school staff, and administrators – past, present and future students – and the readership of the L.A. Times – are entitled to our day in court.