Despite popular perceptions that digital technologies are ruining writing skills, a Pew survey of teachers finds some advantages. 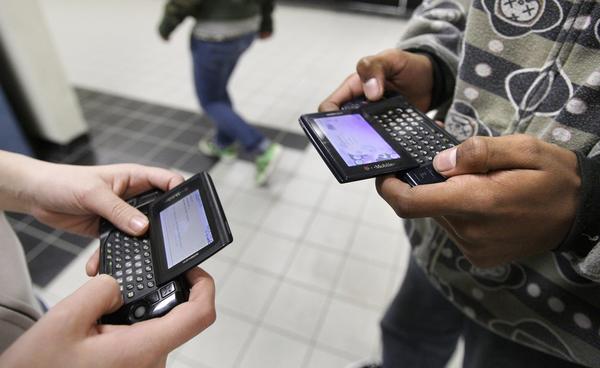 Despite popular perceptions that the onslaught of texting, tweeting and other digital technologies is ruining students writing skills, a national survey of teachers released Tuesday found such advantages as greater creativity, personal expression and increased collaboration.

But some teachers also worried about "creeping informality" in student writing. And they said more than two-thirds of their students had fair or poor abilities to digest long and complicated texts and understand plagiarism issues.

"The survey results challenge in some ways the idea that student writing is being undermined by increasing engagement with digital tools," said Kristen Purcell, the Pew project's associate director for research.

Those findings reflect the experiences of some Los Angeles teachers. Lisa Alva Wood, a Roosevelt High School English teacher who used iPads in her classroom this past year as part of an L.A. Unified test program, said the devices were a hit with students. She said they promoted a deeper interest in writing because students could see their works published in such online forums as http://www.figment.com.

"The kids were fascinated and excited about all the ways they could publish online and see their work and the work of others," Alva said.

She added that digital tools, such as Google Docs, have increased collaboration among both students and teachers. Last year, she and a social studies teacher worked together on a sophomore writing project that they jointly monitored online and published through 826LA, a Los Angeles nonprofit writing and tutoring center.

Scott Mandel, who teaches English and history at Pacoima Middle School, said digital technology is "awesome" for finding teaching material, collaborating with such tools as Dropbox and enriching learning through online field trips to such places as the British Museum in London.

But he said the difficulty most middle school students have typing significantly detracts from the quality of their compositions, producing shorter sentences and less critical thinking. As a result, he said, he requires students to write first drafts by hand.

In March and April of 2012, the center conducted an online survey of 2,462 middle and high school teachers of Advanced Placement classes and those involved with the National Writing Project, a national network of educators that aims to improve writing skills. The writing network and the College Board collaborated in the survey.

Some students said technology both helped and hurt their writing. Keilee Bessho, an incoming junior at La Cañada High School, said her texting sometimes carries over into formal writing, such as using a lowercase 'i' for the personal pronoun. But she said her iPhone has made it easier to look up vocabulary and class assignments.

Jared Yamasaki, a 16-year-old Valencia High School student, said texting abbreviations, such as "cuz" for "because" and "ya" for "yes," has hindered his writing. He also said the auto-correct spelling feature on his iPhone has had a negative effect. "My spelling sucks," he texted.

But, he added, "I guess that they all help involve writing in my life because idk [I don't know] how much I'd write if I didn't have texting and stuff."

In the end, however, technology is not the most important element in promoting good student writing, Alva said.

"Technology is neither here nor there; it's still in the hands of the teacher," she said.

Jul 16, 2013  ::  A survey of teachers who instruct American middle and high school students finds that digital technologies are impacting student writing in myriad ways and there are significant advantages from tech-based learning.

According to teachers, students’ exposure to a broader audience for their work and more feedback from peers encourages greater student investment in what they write and in the writing process as a whole.

At the same time, these teachers give their students modest marks when it comes to writing and highlight some areas needing attention. Asked to assess their students’ performance on nine specific writing skills, teachers tended to rate their students “good” or “fair” as opposed to “excellent” or “very good.” Students received the best ratings on their ability to “effectively organize and structure writing assignments” and their ability to “understand and consider multiple viewpoints on a particular topic or issue.” Teachers gave students the lowest ratings when it comes to “navigating issues of fair use and copyright in composition” and “reading and digesting long or complicated texts.”

These are among the main findings of an online survey of a non-probability sample of 2,462 middle and high school teachers currently teaching in the U.S., Puerto Rico and the U.S. Virgin Islands, conducted between March 7 and April 23, 2012.  Some 1,750 of the teachers are drawn from a sample of advanced placement (AP) high school teachers, while the remaining 712 are from a sample of National Writing Project teachers.  Survey findings are complemented by insights from a series of online and in-person focus groups with middle and high school teachers and students in grades 9-12, conducted between November, 2011 and February, 2012.

This particular sample is quite diverse geographically, by subject matter taught, and by school size and community characteristics.  But it skews towards educators who teach some of the most academically successful students in the country. Thus, the findings reported here reflect the realities of their special place in American education, and are not necessarily representative of all teachers in all schools. At the same time, these findings are especially powerful given that these teachers’ observations and judgments emerge from some of the nation’s most advanced classrooms.

In addition to the survey, Pew Internet conducted a series of online and offline focus groups with middle and high school teachers and some of their students and their voices are included in this report.

Pew+NWP: The Impact of Digital Tools on Student Writing and How Writing is Taught in Schools by 4LAKids