GROUPS DEFEND DEASY AFTER TEACHERS GIVE HIM BAD GRADE 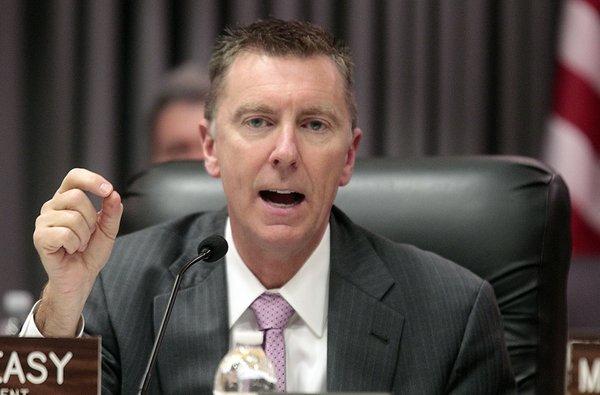 July 12, 2013, 9:23 a.m.  ::  Three community groups and a Board of Education member have come to the defense of L.A. schools Supt. John Deasy after the teachers union released a member survey giving him low marks.

The groups said the Los Angeles Unified School District has made significant progress for students under Deasy, who took the helm in early 2011. They noted a rising graduation rate, more students in Advanced Placement classes and taking AP tests, and plans to equip every student iwth an iPad tablet computer.

"It’s just a shame that a few top officials at United Teachers Los Angeles spend so much time picking fights with the superintendent, when our collective focus should be on raising student achievement and preparing children for academic and professional success after high school," the statement said.

It was signed by Marqueece Harris-Dawson of Community Coalition, Elise Buik of the United Way of Greater Los Angeles and Angelica Solis of the Alliance for a Better Community.

Deasy also received words of support from school board member Steve Zimmer, who relied on the union to survive an attempt by Deasy allies to defeat his reelection bid.

Zimmer said Deasy was a natural but inappropriate focus of discontent over deep budget cuts caused by such factors as the recession and declining enrollment.

"Teachers, their students and our school families have suffered as they never have before," said Zimmer. "I would not expect him to score well with those who have been hurt the most. I am deeply concerned about the morale of our teaching force," he said. "But this goes way beyond John Deasy."

In the 25-question survey, 85% of those who responded rated Deasy below average or poor. Deasy fared badly on every question. But only 26% of union members returned the survey, according to the union.

Deasy has taken pride in a sharp reduction in student suspensions, which was singled out for praise by the community groups. But teachers who responded were not impressed. When it came to developing and installing "effective student discipline and suspension policies," 76% said the superintendent was below average or poor.

The community groups also praised improved performance on state standardized tests, whereas teachers at a Thursday news conference cited increasing pressure surrounding these tests as corrosive to the school environment.

The union's gambit of evaluating Deasy was an intentional twist on Deasy's nascent evaluation that relies in part on student standardized test scores. Many teachers are uncomfortable with the system.

Before the release of the survey, Deasy said he had no comment.

The schools chief has had the consistent backing of U.S. Secretary of Education Arne Duncan and a core of philanthropists who donate heavily to education and political campaigns affecting education policy and school districts.

UTLA adapted the questions about the superintendent from a survey that faculty members complete annually about their school principals. The Deasy survey comes on the heels of a straight up or down "confidence" vote on Deasy that the union conducted in April. In that, 91% of teachers opted for "no confidence." About 17,700 of the union's more than 32,000 members cast ballots.

This latest survey was conducted May 3-10, according to the union website.

Some union activists have been pushing for strategies to force Deasy out of office, especially in the wake of a school board election that somewhat altered the balance of power on the Board of Education.

smf: Much too much has been made already of this superintendent performance survey – and the “groups’ have have come to Deasy’s defense are folk that have always been in his camp.  The survey is political street theater; the defense is a canned partisan review comparing the performance to a production of Aïda at the Met.

That Steve Zimmer has come forth is not all that surprising. Zimmer is right that Deasy is a natural focus for discontent; I argue that Deasy is also an appropriate one because he has positioned himself as a target.

Good leaders foster respect and build morale among the led.  Both are sorely lacking in LAUSD today.