Can a changed school board and Supt. Deasy focus on what's best for the students? 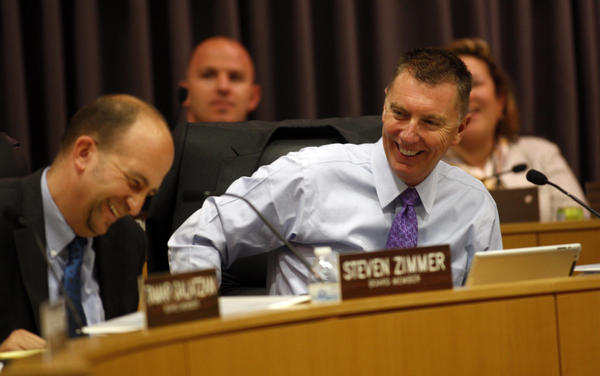 At today's Los Angeles Unified School District meeting newly elected school board member Monica Ratliff will take her seat, changing the balance of power on the board.  Above: LAUSD Supt. John Deasy, right, and board member Steven Zimmer enjoy a light moment during a school board meeting. (Los Angeles Times / July 1, 2013)

July 2, 2013, 5:00 a.m.  ::  The Los Angeles Unified School District is in a period of possibly rocky transition. Newly elected school board member Monica Ratliff takes her seat at the meeting Tuesday; her arrival changes the balance of power on the board. Erstwhile Mayor Antonio Villaraigosa, who pressed for an era of reform in the schools and cobbled together a like-minded majority on the board, is no longer a formidable presence. And this coming and going is occurring at a time of apparent conflict between Supt. John Deasy and his elected bosses. There have been a few signs, and many whisperings, that Deasy is chafing under a board that is less willing to follow his lead. A showdown could be in the offing.

That would be a shame for everyone, but especially for the district's students. So here's some advice for both sides: Take deep breaths. Play nice. Try to work together, and be honest with and respectful of one another's views. Remember that stability within the district and an unwavering commitment to good education are more important than any single item on any political agenda.

These are tougher days for Deasy than when he took on the job two years ago. The reform majority that in the beginning generally rubber-stamped the superintendent's initiatives has in recent months shown signs of fraying. Now Ratliff — a fifth-grade teacher who had been considered a long shot in her race against a reform candidate with far more money backing him — has taken office. Ratliff replaces Nury Martinez, a dependable reform ally of Villaraigosa's, and though the new board member has voiced some reform-oriented positions, she is less tied to any outside interest or single philosophy. She has agreed with some of Deasy's endeavors and criticized others — and she told The Times' editorial board that he would have to be willing to make some changes in his performance to gain her support. Meanwhile, Richard Vladovic, first seen as being solidly in the reform

The board now appears to have a couple of reliably union-allied members, a couple of staunch reformers and three members whose views are more nuanced. That balance could be a good thing. It could lead to more thoughtful, thoroughly vetted policies. But it also means that Deasy will have to do more to convince the board that his initiatives deserve approval.

Deasy is a hard-charging superintendent who has done more, and more quickly, to improve education than his most recent predecessors. He is smart and committed, but his virtues do not generally include flexibility or gracious acceptance of restrictions on his autonomy.

Several months ago, he bristled at a resolution that required him to get board approval before applying for grants. Vladovic, who introduced the measure, expressed concern that some grants might present conflicts of interest or put the district in an embarrassing situation.

More recently, the board overrode Deasy's preferences and passed a resolution that called for using new state funds to restore staffing to pre-recession proportions. Deasy wanted to give individual schools freedom to spend much of the money in ways they felt would be most helpful, but the resolution to carry that out failed. According to the online publication L.A. School Report, Deasy said afterward that he intended to go ahead with his spending plan because the board had not ordered him to refrain from doing so. "If they had voted to prevent me from doing it … well, they didn't think of that," he is reported as saying. He also reportedly mocked the resolution that passed, calling it a "directive to hire every human being on the West Coast."

Another proposal before the board asked the state to amend the "parent trigger" law, which allows parents to force major change at a school if half of them sign a petition. At the board meeting, Deasy oddly suggested that the resolution should instead ask the state to repeal the law altogether — which Deasy himself, a through-and-through believer in reform, surely doesn't want to have happen. But in the following confusion, the repeal provision passed, until some board members realized that they had just passed an extreme measure that would almost certainly reflect poorly on them. They voted again, this time to follow the original proposal — which reasonably asked for faulty parts of the law to be fixed — without the repeal language.

Deasy declined to discuss afterward why he suggested asking for repeal, which he must have known would make his board look bad. Nor is it clear why he would ridicule the board majority's vote on the budget or indicate that he might act against the board's express wishes. But his actions are seen by some as a betrayal of his bosses, some of whom too often attempt to hobble a superintendent who has been making progress with the district's underperforming schools.

The rising tension isn't just between the board and Deasy; there also have been strange shenanigans among board members. In the case of the parent trigger discussion, for example, some members proposed resolutions and voted in ways that obviously didn't reflect their views, apparently to achieve a political aim.

In other words, there have been less-than-stellar actions recently by both the reform and non-reform sides of district leadership. In fact, considering how much lip service L.A. Unified's leaders pay to putting children first, it's extraordinary how relentlessly they pursue their adult-centered goals. After a long financial drought, board and superintendent finally have a chance to make a real difference in the lives of disadvantaged children. To accomplish that, though, everyone will have to forgo the mini-dramas.