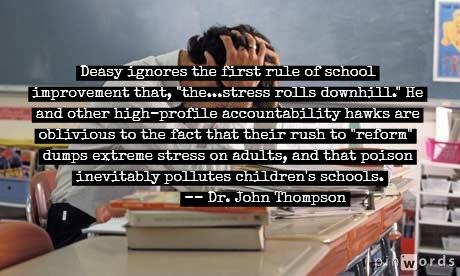 The quote is from an article in Scholastic Administrator | John Thompson: A Teacher's POV http://bit.ly/12JtzDu

July 3, 2013  ::  NPR's [Michel] Martin, in Superintendent's Effort To Do Right By His Kids (smf: follows) nailed the essence of LA Superintendent John Deasy's zealotry, as well as the hubris that has distorted accountability-driven "reform."

Deasy says that one of the things that keeps him up at night is worrying how quickly is he can make good on the promise he made to the youth in Los Angeles. He acknowledges that his rush to transform the schools imposes stress on teachers.  He doesn't understand why everyone would not "get over" that stress.

Deasy warns that educators across the nation will soon be following his driven approach because, "LA is America," and "we are coming to a hometown near you."

Deasy closes his affirmation of stress-induced sleeplessness as a force for helping children with the claim, "the economic viability of LA in California is intrinsically linked to the ability for this country to move forward. And that is going to depend on whether I can live up to the promise of getting every single student college and career ready."

However, Deasy is clueless about what is takes to overcome the educational legacies of poverty. The problem is intense concentrations of poverty and trauma, and the stress that they impose. Inner city schools need more stress like we need another gang war.

Deasy ignores the first rule of school improvement that, "the feces stress rolls downhill." He and other high-profile accountability hawks are oblivious to the fact that their rush to "reform"  dumps extreme stress on adults, and that poison inevitably pollutes children's schools. – JT (@drjohnthompson)

Superintendent's Effort To Do Right By His Kids

The Los Angeles Unified School District is one of the largest school systems in the country. As its superintendent, John Deasy knows the challenges facing educators, parents and children. Host Michel Martin speaks with Deasy about the things that keep him up at night, and what he enjoys most about his job.

This is TELL ME MORE from NPR News. I'm Michel Martin. We are joining you from Aspen, Colorado as part of the Aspen Ideas Festival. And while we're here, we decided we wanted to focus on the big ideas about education and, more broadly, learning. And if you missed your flight or lost your all-access pass, do not worry, because over the next two days we'll be joined by many other people who are shaking things up in education - or trying to. You can also join us online. Head to Twitter and use the #NPRAspen. We'll be reading your tweets and sharing as many as we can over the next few days. Why are we talking about education?

Well, one reason is that education has been critical to America's status as the land of opportunity, where anybody can rise and improve his or her circumstances through hard work, but also education. Later this hour, we want to ask a group of people who are all involved in education in one way or another whether that is still true. Is the U.S. still the land of opportunity for all, with education as the key? But we want to start with a newsmaker interview. John Deasy is the superintendent of the Los Angeles Unified School District. That's the nation's second largest school system.

He took the job there in April of 2011, and he's faced a number of the challenges that are seen in school systems across the country - budget cuts, fraught relationships between administrators, teachers and parents, and, oh yes, the big one: teaching students effectively. And Superintendent John Deasy is with us now from the Aspen Ideas Festival. Thank you so much for joining us.

MARTIN: So let me just start with a simple question. What keeps you up at night?

DEASY: Where do you want to begin? A great deal...

MARTIN: ...But the truth, that always helps.

DEASY: Definitely. So I think one of the things that absolutely keeps me up at night is how quickly I can make good on the promise that we made to the hundreds of thousands of youth in Los Angeles, that their rights would be honored, and that they would all graduate, college and workforce ready. We are a very large school system, and the overwhelming majority of the youth who I get the privilege of leading live in circumstances of peril and poverty.

Many do not speak English at home, many do not speak English as their first language, many do not have access to health care. And every single one of those students wants to be you and I, and they want to graduate and enter post-secondary without remediation, or enter the workforce and earn a living wage. And that is our promise, and we work at that at a very rapid pace. And I know that that causes stress for some of us.

MARTIN: We talked about fraught relationships between teachers, parents and kids and balancing, you know, the needs, the interests and the desires of all the various stakeholders, to use a word that we hear a lot in education. When you're honest with yourself, what's the hardest relationship to maintain in a positive way?

DEASY: At the moment, I think the hardest relationship to maintain in a positive way is the teachers' union leadership and the administration. Membership are remarkable folks. I mean, I've seen the best teaching I've ever seen in my life in Los Angeles.

I've seen people work in punishing economic circumstances, giving opportunity to students who otherwise would just not have that. But trying to move the system much quicker on a youth rights agenda has certainly been, at times, very prickly. And quite frankly, at times I just don't understand the opposition.

MARTIN: What do you mean, you just don't understand it? Well, I mean, just to your point, back in April, 91 percent of the 17,000, almost 18,000 ballots cast by LA's teachers' union expressed a vote of no confidence in your leadership. Back in April of 2012, there was a profile of you in the Los Angeles Times and it described you as, quote, some see Deasy as a dynamic leader driven by a moral urgency to give all students a quality education, others view him as a relentless taskmaster intolerant of dissent.

And it's interesting to me that a number of school leaders have been described in very similar terms. Like Michelle Rhee, for example, is a name that many people know, who was a leader, for a time, of the Washington, D.C. public school system. So why do you think that is?

DEASY: So when the union orchestrated the vote, so about half of the membership voted and that was their vote. During those days leading up to it, there were cartoons that were produced every day. You know, the fact that we were feeding students in the classroom was a major reason why we should have no confidence.

MARTIN: Feeding breakfast to the students?

DEASY: Correct. So let's be really clear, we're not confused about our mission. And our mission is to serve students. And part of that mission is to ensure that students have a highly-effective teacher in front of them every single day of the year in a school led by a highly-effective principal. So we are very much driven by the issues of high instructional quality by individuals who have the right to be in front of students, and we take that seriously.

And the fact is that if folks are doing a phenomenal job, we should be doing everything to ensure that they stay there. That goes way beyond their seniority number. And if folks are not doing a phenomenal job, we should be intervening and trying to help them. And if they cannot get better, they do not have the right to be in front of students. So I get the stress around that. I get the fact that we've put in a new evaluation system. I understand the fact that we are moving technology as fast as any district I know around that.

We are implementing the common core. But I have to be quite frank with you, if those things cause stress in adults, and I understand they do, then you need to come with me and visit the families who live in cars behind Huntington Park High School. You need to visit the young ladies who are having children - and we provide schools just for gals who are having babies, 'cause you don't drop out of school anymore - who see an OBGYN for the first time the day they have their child. There's no access to healthcare. If we want to talk about stress, it's families with no parents. That's stress. I am convinced that we can get over adult stress to serve youth. You know, LA is a fascinating place. I say this all the time, LA is America, only sooner, and we are coming to a hometown near you.

MARTIN: Or as we like to say, the way we live now.

DEASY: Right, I mean, who we look like, our successes, our struggles - I mean, the economic viability of LA in California is intrinsically linked to the ability for this country to move forward. And that is going to depend on whether I can live up to the promise of getting every single student college and career ready.