Turmoil at the $232-million Cortines School of Visual and Performing Arts threatens to turn it into just a terribly overpriced neighborhood school. 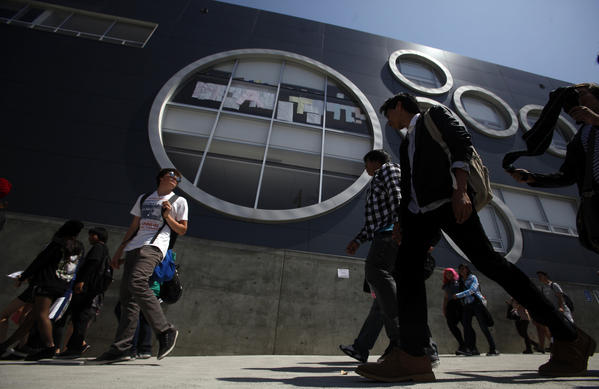 The L.A. Unified school district has had a difficult time funding the expensive and controversial Ramon C. Cortines School of Visual and Performing Arts. (Los Angeles Times / May 8, 2012)

Four years ago, in the midst of the recession, with the staff and curriculum still not in place, the district foolishly decided it would nonetheless open the school that fall. To make matters worse, then-school board President Monica Garcia wielded her considerable power to subvert the intended goal of making this a premier regional arts school, and instead turned the $232-million Cortines School of Visual and Performing Arts into a neighborhood-oriented school with 70% of the seats reserved for students who live nearby. As a result, private donors whose support was expected to supplement program expenses, but who wanted admissions to be based solely on auditions and portfolios, lost interest.

Turmoil became a near constant as the school went through several principals in rapid order and candidates who had accepted the job suddenly changed their minds. Even the naming of the campus after the previous superintendent, Ramon Cortines, caused protests. District leaders circumvented their own rules by high-handedly naming the school before a campus-based committee could convene.

Now the school is losing what little stability it had as Principal Norman Isaacs leaves after less than two years, openly attributing his departure to the lack of funding for arts programs. The glossy facilities are of limited use without the staff to operate great arts programs, he said. In contrast, the prestigious and sought-after charter Orange County School of the Arts operates mainly out of a nondescript former bank building.

L.A. Unified doesn't bear all the blame for the lack of money. The district's budget was hit so hard during the recession that it would have been irresponsible to fund extra arts positions at one school while others went without basics. And the district can't allow the desires of private donors to dictate admissions policies — even when they have the right idea. Still, this is what happens when the district places politics above sound school management. In fact, the board so misread the community that it failed to see that neighborhood interest in the arts school was low. As a practical matter, the school enrolls 70% of its students from outside the neighborhood because the nearest students aren't applying.

The district should turn the campus into a regional arts magnet, with most admissions based on talent rather than geography — and about 30% of its seats reserved for neighborhood students — and commit to using some of the extra money coming from the state's new funding formula to fully fund the school's arts programs.

Otherwise, all it has is a terribly overpriced neighborhood school.

smf: Frankly Scarlett - the shortfall hasn’t just been in funding, it’s been in support – in people from the District actually giving a damn.