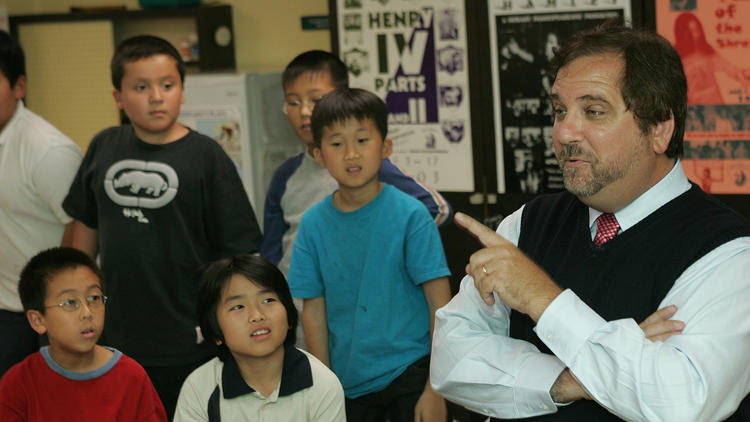 6.17.2015  ::  Attorneys for a nationally recognized Los Angeles Unified teacher, who was removed from his classroom after allegations of misconduct, are issuing an ultimatum to district administrators: publicly apologize and let him return to work, or get sued.

Rafe Esquith, a longtime educator at Hobart Boulevard Elementary School who has written several books on teaching and received multiple awards for his work, has not been allowed to return to school since district officials launched an investigation in March.

Three months later, L.A. Unified officials have not clearly outlined the allegations against the popular teacher, said his attorney Mark Geragos. But Geragos said he learned that the investigation stemmed from a complaint by another teacher after Esquith read to a class a passage from "The Adventures of Huckleberry Finn" by Mark Twain.

The passage, which is much longer, includes this section: “The duke and the king worked hard all day, setting up a stage and curtain and row of candles for footlights. … At last, when he’d built up everyone’s expectations high enough, he rolled up the curtain. The next minute the king came prancing out on all fours, naked. He was painted in rings and stripes all over in all sorts of colors and looked as splendid as a rainbow.”

Esquith was initially sent to a district administrative office, where instructors report to after they've been removed from their classrooms over allegations of wrongdoing. He is now home waiting for the results of the district’s investigation. The teachers union has criticized these so-called teacher jails, saying that instructors typically aren't informed of the charges against them and that they are barred from their classrooms for far too long.

Geragos said the district shared the information with the state, which has already cleared Esquith.

“When you quote Mark Twain you go to teacher jail, your reputation is trampled on and ignorant bureaucrats assume the role of judge and jury in the face of a baseless allegation which has already been found meritless by the California Teacher Credentialing Committee,” Geragos said. “Sadly, it is the students, their families and the community that suffers."

District officials declined to provide details, except to say that “the goal is to complete the investigation before school starts in August.”

“He’s extremely distressed by the whole thing,” Geragos said. “He’s helped by the fact that there has been a deluge of support from parents, teachers and others. This is somebody who has given his whole life to teaching and being in the classroom and has been recognized as one of the most unbelievable teachers out there. It’s the personification of 'no good deed goes unpunished.'”

Esquith’s nonprofit, the Hobart Shakespeareans, had to cancel 12 performances of “The Winter’s Tale,” which were set to begin April 23.

Parent Annie Han said she is not sure whether she will send her son to the Koreatown school next year, if Esquith does not return.

“As a parent, it’s devastating,” Han said. “I grew to respect and love him not just as teacher of my children but as a person. I know so many of his fifth graders cried every night because they were graduating and they were going to have to do that without him. “

Geragos gave L.A. Unified 10 days to respond to his ultimatum.

Esquith, who wrote three books, including "Teach Like Your Hair's on Fire: the Methods and Madness inside Room 56" has received national recognition for his teaching abilities. He also has criticized what he considers to be too much testing and scripted teaching methods.

The allegations against Esquith were first reported by KCBS.

●●smf’s 2¢: The Comments section in the LA Time online edition  includes a pseudonymous+unsubstantiated accusation – featured in a sidebar within the body: not trailing in the comments:

“    I am glad he was finally removed for something. The reality is that he was a horrible man that was responsible for physically and mentally abusing some of his former students. As an alumni, I saw a lot of inappropriate things firsthand that should have resulted in him being fired and jailed but...”
SirCarnes
at 8:24 AM June 18, 2015

The Times owes us all a lot better than to feature this kind of attack: If SirCarnes “saw a lot of inappropriate things first hand” why hasn’t he filed a complaint of the police or CPS?

Seeing as I’m perpetuating anonymous accusations of inappropriate behavior, let me include a missive received by 4LAKids from the pseudonymous “Quentin Compson”

Rest assured, your teaching colleagues DO admire, respect and appreciate you.

It's the Dark Tower downtown that is depressingly ignorant and antithetical to TRUE Education. Of course the folks at Beaudry have HEARD of "Huck Finn", but the reality is that only 1% have actually read it. We teachers look at Beaudry as the place where real intellect and curiosity goes to die.

As a National Board Teacher, I'm appalled at the Beaudry Machine's definition of a good education. Of course the Machine has perfected its definition of "education" over the last few years with the assistance of the Ed Reform movement, the Broad Foundation, Arne Duncan, the Pearson Corporation, John Deasy and the LA TIMES' editorial board. NONE of these Machines understand the art of the classroom and what happens there.

So now you have found yourself in Teacher Jail facing David Holmquist's medieval gang and an assortment of people so jaw-droppingly uncultured, dim and full of themselves that you wonder why you even got into teaching in the first place if THIS is the sort of people who oversee it all.

Well, as you know--as ALL good teachers know--the reason is, simply, our kids.

Your kids deserve you. Not the administrators. Not the School Board. Not the LAUSD hierarchy.

Your kids--you have been their wonderful intellectual and passionate champion for years.

Your case and plight exposes clearly the pedagogy and priorities of LAUSD.

As your leadership destroys public education, you give educated parents the excuse to abandon LAUSD, paving the way for the sad charter ascendancy which serves the Machine's ultimate function--

Mark Twain would have written his magnum opus about LAUSD.