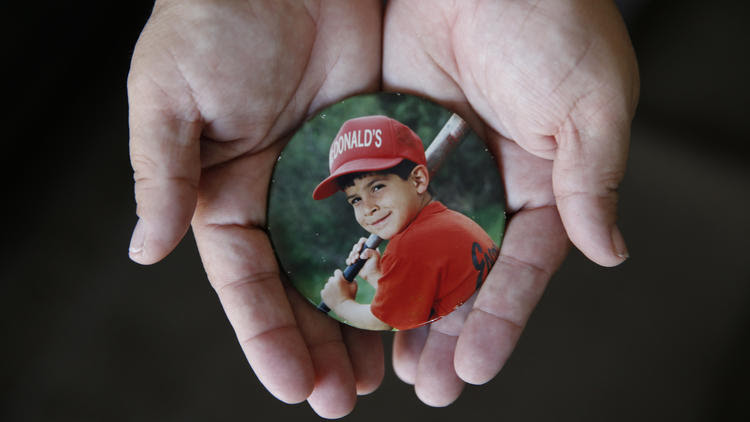 Marissa Cortes-Torres holds a photo of her son, Ramon "Junior" Cortes, 9, who died of a complication of measles, subacute sclerosing panencephalitis, after having contracted measles as a baby. (Allen J. Schaben / Los Angeles Times)

But like a Trojan horse, the virus can find a way to hide from a baby’s undeveloped immune system. The baby will survive, but within his or her body, a weakened form of the measles lurks, beginning to infect the brain.

Over the ensuing years, the disease gets stronger. Then the infected human being, long past being a baby, experiences mood swings and behavioral problems. Convulsions, coma and death follow.

There is no cure. It is always fatal.

There were at least 11 cases of this deadly complication, known as SSPE, or subacute sclerosing panencephalitis, after the 1988-91 measles epidemic in the United States, which infected more than 55,000.

Dr. James Cherry, primary editor of the Textbook of Pediatric Infectious Diseases and a UCLA professor, said the complication underscores the need for measles vaccination rates to remain as high as possible, as inoculations have fallen in the last decade.

“Measles is not a benign disease,” Cherry said. And SSPE, he said, is a “horrible disease.”

The most vulnerable to getting SSPE are those younger than 2, who have undeveloped immune systems. Especially at risk are babies too young to get their first measles shot, which happens at 12 months.

That’s what happened to Ramon “Junior” Cortes, a boy born in Orange County 26 years ago.

His mother, Marissa Cortes-Torres, was 24 when she gave birth to him. When Junior was a month old, Marissa became very ill.

Doctors didn’t figure out she had contracted measles until the baby fell ill. (Marissa had been vaccinated in the 1960s, when mistakes were made in how the newly introduced inoculation was administered.)

The infant was in the hospital for two months, hooked up to tubes, struggling to breathe.

By the time Junior reached age 3 months, he seemed to recover.

Years later, in kindergarten in Escondido, he would stand when a teacher told him to sit. He struggled to add. At home, he would arbitrarily take clothes out of the drawers. When he biked or rollerbladed, the boy would take surprising spills, bruising his legs.

Finally, a neurologist at Rady Children’s Hospital in San Diego told Marissa, “I’m sorry to tell you: Your son is going to die.”

SSPE, she was told, “attacks the nervous system and it destroys the brain.”

It was the day before her son turned 7.

Soon, the boy who used to “swim like a little fish” became confined to a wheelchair.

Junior started to suffer tremors so bad he couldn’t feed himself. He became so frustrated that he would push his food away and refuse to eat. He had to wear diapers again. Seizures sapped his strength. When he hallucinated, all Marissa could do to try to soothe him was say, “Junior, Junior. Mommy’s here.”

One day, after he turned 9, he laughed while watching "Barney & Friends," but while looking away from the television.

“I put my hand in front of his eyes,” Marissa said. “He was blind.”

Junior breathed his last breath a month later, on his mother’s lap.

There have been at least 16 cases of SSPE in California since 1998, which is likely an undercount because not all cases may be diagnosed nor are they required to be reported to the state, according to the Department of Public Health. There are several suspect cases that have not been confirmed.

Kathleen Harriman, chief of the state’s vaccine-preventable diseases epidemiology section, said she often hears from people who say that getting a disease like measles naturally is best.

“I can’t even tell you how many times I’ve heard that ... ‘My child will be fine, because I feed them really good food and they’re well nourished and so they will survive measles,’” Harriman said. “This is a clear example where it’s not better to get a natural infection.”

Officials say they hear a report about SSPE about once a year in California.

In the Bay Area, a 4-year-old boy is currently dying of SSPE, said Dr. Catherine Sonquist Forest, the medical director of the Stanford Health Care clinic in Los Altos.

The boy, born in the United States, was only 5 months old when he was infected with a severe viral illness. After he turned 3, the once healthy young boy began to struggle with behavioral problems and seizures. Soon he was diagnosed with SSPE.

He is now in hospice care. His eyes are open, but he can no longer move on his own and cannot respond to commands.

“He was exposed because other people weren’t immunized,” Forest said.

Two weeks ago, Forest recounted the boy’s diagnosis to a California Assembly committee on health. She urged lawmakers in a letter to require that children, barring an allergy or other medical reason, be vaccinated as a condition of entry into school.

The Assembly is scheduled to vote on the bill, SB 277, on Thursday. The Senate passed the bill in May.

“As the mother of my patient told me last week, ‘My child is dying because someone who chose not to be immunized exposed my vulnerable baby, and nothing can be done to save him,’” she wrote.