November 30, 2010 - The nation’s high school graduation rate, which declined in the latter part of the 20th century, may have hit bottom and begun to rise, according to a report to be issued Tuesday by a nonprofit group founded by former Secretary of State Colin L. Powell. 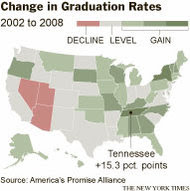 “The United States is turning a corner in meeting the high school dropout epidemic,” General Powell and his wife, Alma J. Powell, wrote in a letter introducing the report.

The report cites two statistics. The national graduation rate increased to 75 percent in 2008, from 72 percent in 2001. And the number of high schools that researchers call dropout factories — based on a formula that compares a school’s 12th-grade enrollment with its 9th-grade enrollment three years earlier — declined to about 1,750 in 2008, from about 2,000 such schools in 2002.

But the report notes that progress in some states and school districts had not been matched in others. Tennessee and New York made “breakthrough gains,” sharply raising their graduation rates from 2002 to 2008, the report says. In Arizona, Utah and Nevada, graduation rates dropped significantly.

The 88-page report, “Building a Grad Nation,” was published by America’s Promise Alliance, along with two other groups. “I like this report because it shows that progress is possible against all odds,” said Marguerite W. Kondracke, the alliance’s president.

Daniel Losen, a former Harvard lecturer who researches graduation issues, said the report “might be a bit on the rosy side.” He added, “We might be beginning to turn a corner, but we’re not coming out of it yet.”

The report cites school districts that have made progress, as well as some where the crisis has worsened.

In 2005, researchers at Johns Hopkins University identified Richmond High School in Indiana as a dropout factory. But from 2006 to 2009, teachers, community leaders and professors joined in an effort to help students stay in school, raising the graduation rate to 80 percent from 53 percent, the report says.

In Las Vegas, however, dropouts soared during the building boom of the last decade because many young people quit high school for jobs in construction and landscaping. Today, many dropouts there are unemployed.

Progress and Challenge in Ending the High School Dropout Epidemic

With one in four U.S. public school students dropping out of high school before graduation, America continues to face a dropout epidemic. Building a Grad Nation: Progress and Challenge in Ending the High School Dropout Epidemic, released November 30  by America’s Promise Alliance, Civic Enterprises, and the Everyone Graduates Center at Johns Hopkins University, shows that we can end the dropout epidemic, even in schools from lower-income, urban and rural districts that many previously thought were hopeless. The report is supported by lead sponsor Target, and includes additional sponsorship from AT&T and Pearson Foundation.

The U.S. graduation rate increased from 72 percent in 2002 to 75 percent in 2008. The report reveals that the number of “dropout factory” high schools fell by 13 percent – from 2,007 in 2002 to 1,746 in 2008. While these schools represent a small fraction of all public high schools in America, they account for about half of all high school dropouts each year. Experts say targeting these high schools for improvement is a critical part of turning around the nation’s dropout rate.

Other highlights of the report:

Just as Secretary of State George C. Marshall launched a plan to rebuild Europe after World War II, we must rebuild our broken school system. We are launching a “Civic Marshall Plan,” comprising policymakers, educators, business leaders, community allies, parents and students to address the dropout epidemic by focusing on the dropout factory high schools and their feeder elementary and middle schools. In tune with the call from President Obama and U.S. Secretary of Education Arne Duncan earlier this year to increase the U.S. graduation rate to 90 percent by 2020, we are working to mobilize Americans to quicken the pace. To reach these national goals, the graduation rate must rise by an average of 1.5 percentage points per year over the next decade. The Civic Marshall Plan outlines the benchmarks to ensure the attainment of those goals, and focuses on the strategic deployment of human resources to help school districts and states accelerate improvement.